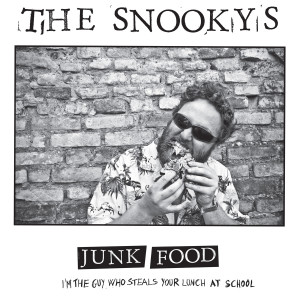 ‘Junk Food’ , their fifth release – not counting a 7” split with Morbeats – comprises of thirteen exhilarating garage-punk romps, only a few of which clock in past two minutes.  At their most uncompromising, ‘I’m a Geek, You’re a Nerd’ has a speed and musical assault that places the band in a similar mould to many eighties hardcore punk pioneers. Its buzzsaw guitars and dumb humour seems particularly in line with D.O.A. – something most welcome – while the spiky ‘You’re a Bluff’ mixes a Dead Kennedys-esque speed with a choppier chorus riff that teases with a tough melody.   Lyrically, it’s sometimes hard to work out where The Snookys’ true intentions lie on these lightning fast romps as the garagy production and heavy distortion across all of the vocal lines makes most of the lyrics hard to follow.  Still, in terms of general attitude, both these tracks are first class DIY punk.

There’s more to The Snookys than beating their listeners into submission, though.  Sharp rhythm guitars with a very thin tone power their way through ‘Actin’ Good’, a first-class garage rocker. While the frenzied vocals and sharp guitar lines make it hard not to think of The Hives circa ‘Barely Legal’, when the guitars eventually subside, it becomes all the more obvious there’s an equally great bass riff hiding at the centre of this tune. Harking back to the bass driven punchiness of The Snookys’ earlier work, ‘Not a Girl’ works around a fantastic rhythm section, chunky guitar lines and a punky vocal.  Although lacking the general frightening and unhinged elements of The Cramps, there’s a psychobilly spirit somewhere within that never quite manages to fight its way out, but even so, helps this to be one of ‘Junk Food’s proper highlights.  Also worth checking out, ‘Stab You’ blends garage rock with a shout-along pogo-friendly edge that’s closer to second division late 70s UK punk in general pace, it’s muted chords creating a chopping effect that’s intent on never letting things fall too far short of frantic.

It’s fast…it’s short…it’s raw.  Clocking in at barely twenty two minutes, ‘Junk Food’ really doesn’t mess around. It takes a few spins to really get the measure of and it isn’t by any means perfect, but if you dig garage punk sounds, there’s much to enjoy here.   …And if you like this, then working your way backwards through The Snookys’ catalogue is definitely advised.