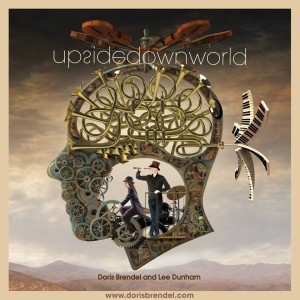 Doris Brendel first appeared on the music scene as a member of The Violet Hour, a pop-rock band who achieved cult success and will be best remembered as the support band on Marillion’s ‘Holidays In Eden’ tour back in 1991.  Since those days, Brendel has worked on an extensive musical career, various solo projects covering many moods and styles, cultivating a cult audience along the way. Teaming up with multi-instrumentalist Lee Dunham for a second time, 2015’s ‘Upsidedown World’ is a mixed bag of treats, clearly designed for different ears to love different things within.  It is, however, quite unlikely that most people will like it all.

With no messing, it’s straight out with the big riffs for ‘The Devil Closed The Door On Me’.  A defiant pastiche of late 70s and early 80s hard rock, it’s not especially subtle.  The intro in particular is a dead ringer for ‘Powerage’ AC/DC in the way the drums thud before the tune reaches full stride.  Approching the verses, there’s a huge guitar riff that goes head to head with Brendel’s gravelly voice for dominance, while possessing a disjointed approach that gives a cheeky wink to ‘Back In Black’.  Just as you feel you’ve got it pegged, the band switch gears and move into a bluesy interlude lead firmly by an assertive lead vocal, underpinned by some jazzy noodles courtesy of Mr. Dunham.  Guest guitarist Neal Dunham steps up for a melodic metal solo before leading the rest of the band back into the main hook.  A tough opener, but beyond a couple of spins, the amusement wears pretty thin.  Similarly hard, but avoiding any need for pastiche, ‘Slap Me and You Die’ is a hard rocker with a far more natural flair. The rhythm guitars lay down a disjointed funky riff, occasionally intercut by a far more fluid lead with a strong tone.  Brendel’s gravel-edged tones sit well against the hard rock; it’s almost impossible not to think of Sass Jordan’s classic ‘Rats’ album when approaching this number for the first time – the similarities are strong both instrumentally and vocally, with Brendel displaying a huge amount of attitude.  At the point where the retro hard rock seems set to stay, the number takes a dog-leg into something more complex via muted metallic guitar rhythms and into 80s metal territory.  Here, a barrage of twin leads make comparisons with ‘Seventh Son’ era Iron Maiden somewhat inevitable.  In terms of an instrumental break that comes as (a) a complete surprise and (b) doesn’t quite fit the mood, it’s a sure-fire winner.  The only weak link is a one line chorus, but all of the musical arrangements are tough enough for the number to stand.

Those hard rockers are fine, but luckily, with a mix of rock, prog and folk influences, ‘Adored’ quickly asserts the array of talent Brendel and her band really have to offer, via something about a thousand times more sophisticated.  Her voice is easily recognisable, but musically speaking, this is pretty far removed from the opener.  There’s a decent melody lurking throughout each vocal line – and a memorable chorus on hand too – but it’s the arrangement that really satisfies.  Acoustic guitars occasionally delve into the world of prog-folk – most notable on a complex musical interlude with an almost Tudor charm, while in the electric realm, some consistently superb fretless bass from Dunham marks the high point of a sprawling seven minutes.   Those who like gentle, prog-influenced material are almost guaranteed to love this from first listen.  More of this would be most, most welcome…but Doris has other ideas.

A couple of pop  numbers fill the middle of the disc. ‘Accessorise’ is clearly designed as a loving homage to Alison Goldfrapp, but given both Brendel’s vocal style and proximity to two hard rock outings never quite feels right somehow, while ‘Tumbling Away’ (arguably the better of the two) brings hard beats and a truckload of backwards vocals.  This would also represent something best skipped after a couple of listens, but is saved by a nifty bassline and a repetitive hook that remains memorable after listening, which is more than could be said for the bulk of the tune with its over-reliance on decidedly average programmed drum loops.

From here, the quality picks up again thanks to the very adult and pleading ‘Act of Defiance’ pitching a weary voice against Tori Amos-eque piano lines and an atmospheric cello.   The husky voice and confessional style comes across as one of Brendel’s best performances, especially once the band chime in.  Second only to ‘Adored’, the proggy influences here really elevate the arrangement, with metallic staccato riffs adding extra power.  The second half of this track provides the perfect balance between anger and melody, each of the band members more than up to the task in hand.  Another great bassline can be found lurking within, soaring to a place of brief dominance en route, it’s hard slapped sound a providing a key moment as the band indulge in some unexpected prog-metal stops, before taking the lead near the close.  In all, this is an excellent track – ‘Upsidedown World could do with at least one more of this calibre.

Bringing things down, ‘Still Running’ at first centres itself around another excellent piano melody. Sadly, this is pushed aside all too quickly in favour of a deeply uninteresting drum track.  Salvation comes with some more brilliant bass work and strings, but beyond that, it never quite reaches full potential.  There are a few really unnecessary vocal treatments and a repetitive one-line hook fails to make anything like a long-term impact.  The title cut – a largely acoustic affair – has a childlike charm and simplicity which allows the vocal to take centre stage.  Given Brendel’s natural approach, this works well, proving sometimes less is most certainly more.   Neither are ever destined for classic status, but it’s easy to see how and why they came to be.

If things appeared somewhat eclectic previously, the closing number ‘Life Is a Mushroom’ pushes things ever farther in terms of stylistic expression.  Like absolutely nothing else on the album, this closing number is a foray into early 90s funk.  Although the rhythm guitars are well structured and the band are clearly having fun, being kind, this track is utterly disposible…and beyond a couple of listens, it is also frankly rather irritating.  Elements of the earliest Brand New Heavies collide with a subtle-as-a-brick homage to Deee-Lite’s ‘Groove Is In The Heart’ – name-checking that track via the voice of someone impersonating Bootsy Collins (quite badly).  Since that Deee-Lite track is one of the finest exponents of the style, why on earth would anybody with any taste want to listen to a bunch of (admittedly talented) rock musicians aping it?  This ends ‘Upsidedown World’ on somewhat of a bum note.

‘Upsidedown World’ is an album that never quite knows what it wants to be, although it’s hugely possible that is reflected in the chosen title.  It’s hard to imagine those who get kicks from the kind of hard rock of ‘Slap Me’ returning for repeated entertainment from the spacious, filtered pop of ‘Tumbing Away’ or vice versa.  Occasionally, the moods even appear to shift mid song, like a cut and paste bunch of ideas thrown out into the world with sheer ballsiness.  That said, it’s not without its moments to be enjoyed (despite the Deee-Lite trashing) – just be prepared to work a little harder to reap those listening rewards.