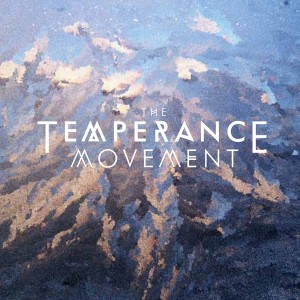 At that point, the band only had an EP behind them with regard to studio work. 2013’s self-titled full-length album expands the band’s repertoire with mixed results.  Most obviously, none of the recorded work contains anywhere near the same energy of their live set, nor does most of it leave a lasting impression, mostly coming across like a third rate Black Crowes cover band.

The best attempt at going for the jugular can be found within the three minute stomper ‘Take It Back’, a tune where Temperance go all-out in the rock stakes.  The guitars adopt a tough hard rock tone, the drums crash relentlessly, while a barrage of whoas provide the simplest of refrains.  It doesn’t need to be complicated; retro rock music such as this is about getting a crowd moving and sweating – and this tune marks one of the only occasions where the Temperance Movement sound capable of doing so.  Another of their better tunes, ‘Be Lucky’ adopts the rhythmic swagger of classic Faces, but the thin guitar tone favoured by both Luke Sayer and Paul Portashnick leaves everything sounding flat.  The basic grooves of the best Faces work (and to a lesser extent their revivalist equivalent, The Quireboys) provide the heart of the tune, but should a band really settle for sounding so lacklustre?  Even by the time the solo appears, the lead guitar work noodles rather limply for a few bars, when in reality, it should have sounded ready to tear the roof off.  Frontman Phil Campbell, meanwhile, sounds like a young Rod Stewart (albeit Rod not trying) and a bad John Fogerty impersonator, possessing none of the talent of either; his delivery rarely less than hugely unappealing, all rasp and no training…and above all, no presence.

This tune is typical of most of Temperance’s songs in that they prove that just having the right set of influences and a modicum of musical ability just isn’t enough.  The cocky swagger of ‘Know For Sure’ showcases the twin guitars in a better  fashion than most of these songs – finger picking bluesiness in the right channel and pleasing slide in the left – resulting in one of the record’s best overall tunes, but again, although there are signs of better playing, most of it comes without any real bite.  Both players poke flaccidly through bars where a ripping solo should be, while the rhythm section do little more than mark time throughout.  Where’s the huge bass drum kick?  Damon Wilson sounds like he’s playing a tiny kit miles away. Elsewhere, ‘Only Friend’ and ‘Morning Riders’ bring the better elements of Campbell’s voice to the fore just briefly, but on these tunes – painting the band to sound little more than a poor-man’s Black Crowes – it’s more obvious than ever that the band just can’t write any memorable material.  After a few bars of both these numbers in particular, there’s just too much temptation to hit the stop button and reach for those copies of the Crowes’ own ‘Shake Your Moneymaker’ and ‘Before The Frost’.

Since Temperance sound so lacklustre on most of their hard rockers – check out the sorry collection of whoas during the “big climax” of album closer ‘Serenity’ for further proof – it’ll come as no surprise that the album’s few ballads grate even more.  Taking ‘Lovers and Fighters’ as the key example, there’s some potentially good music to be heard – gentle country influence via steel guitars, a slightly bluesy guitar lead (resulting in, perhaps, the best solo on the album) and a lovely, natural sounding drum part – but it’s all killed by a really bad vocal.  The voice on this particular number is weak in the extreme, resulting in an unconfident performance where Campbell sounds like the offspring of a bad country balladeer and one of Henson’s Muppets.

A year on from those Little Angels support slots, The Temperance Movement were named Classic Rock Magazine’s best new band of 2013. Quite why some classic rock fans and journalists had gone out of their way to heap praise upon this band is a mystery.  Their songs – in the main – are uninspiring, their playing often workmanlike and most of the vocals are genuinely horrible. These guys are so desperately dull, they even make St. Jude seem vital…and for retro rock chops, they’ve only got a fraction of the musical abilities and song writing talents displayed by Luke Morley’s post-Thunder band The Union.  Honestly, don’t believe the hype – save yourselves the bother: avoid this record and listen to The Union’s ‘Siren’s Song’ or Cry of Love’s ‘Brother’ instead – it’s time better spent…guaranteed.