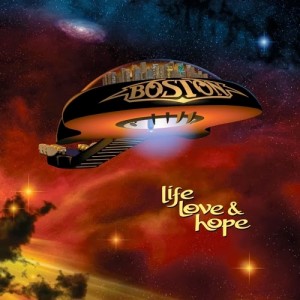 Another decade on, Boston’s sixth record ‘Life, Love & Hope’ (their first release for Frontiers Records) is a hit and miss affair, to say the least.  Half the time, there’s nothing wrong with the songs; in that department, things are rosy, with moments shining through which are unmistakably Bostonlike – most notably on the title cut, featuring a multi-tracked guitar duelling with a pomp-driven harmony vocal.  The huge problem here is the overall sound. With nothing representative of the near-pristine production values of the those first three records, the trademark Boston sound is reduced to a demo quality mulch, making ‘L,L&H’ almost unlistenable at times. The largely muffled, underwater qualities give the impression of attempting to listen to ‘Don’t Look Back’ on the morning after a particularly loud gig.  Given Scholz’s perfectionist tendencies of the past, whoever passed this off as being sonically okay needs to get their hearing tested…That fudgy sound absolutely kills the otherwise pleasing power pop of ‘Someday’, a tune that should sound punchy given its presence of staccato guitar rhythms and vocal choir.  Instead of a huge Boston classic, we get what sounds like a work-in-progress with thin drum track to boot – a huge drawback with almost all of this album’s material, good, bad or indifferent.

Attempting to look past the sonic deficiencies as much as possible, Boston fans will find a few joyous moments lurking within – the guitar work on parts of ‘The Way You Look Tonight’ certainly revisits the band’s glory years, while vocalist Tommy DeCarlo’s smooth voice sounds very assured.  A previously unheard performance from Brad Delp (RIP)  on ‘Sail Away’ reminds us the world lost a great vocalist when he passed away in 2007, while the use of spoken voices and electronic beats scattered throughout brings a different dynamic to the otherwise very 70s pomp.  One of ‘Life, Love and Hope’s best tracks, the juxtaposition of piano ballad elements and chugging guitar lines typify everything that was great about Boston’s earlier outings.

Goodwill only stretches so far, of course, and eventually the feeling of having suffered some hearing loss becomes too distracting.  The attention to the harmonies during ‘Love Got Away’ is lovely – such a shame there’s so little rhythmic punch, while ‘Heaven on Earth’ – a track that should have rocked fairly hard – brings a chunky riff which, once the bass and drums (fail to) kick in becomes a limp disappointment.  These are good songs in principle, but as any fan knows, they should have been – and could have been – fantastic songs, if only this record had a proper, full production. Oh, for the want of a drum kit and a bit of welly…

So, a ten year wait for what sounds like a bunch of demos? Oh dear.  Also, it’s not like it’s all brand new material, either.  The twelve track disc is padded out with some recycling: among the previously unheard numbers, two tunes from ‘Corporate America’ (‘Someone’ and ‘You Gave Up On Love’) have been re-recorded with indifferent results, while a third (‘Didn’t Mean To Fall In Love’, featuring the much-missed Brad Delp) is merely remastered.   It may be remastered, but it still sounds half-finished and wooly.  Even so, song-wise it’s potentially the most memorable thing ‘Life, Love and Hope’ offers.

Boston apologists will welcome this material – and, yes, it’s always lovely to hear Tom Scholz playing the guitar, something he does very well throughout – but it’s a shame the material lacks the big sounding send-off it so desperately craves.    Some good songs, but unless viewed as a working demo, ‘Life, Love & Hope’ will be a huge disappointment to most, especially after waiting so long. Let’s not forget the gaps between Boston records last longer than most band’s careers…