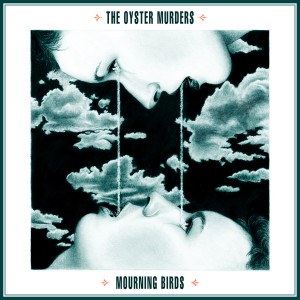 Following their 2012 debut album and tour, The Oyster Murders set about writing and recording new material to follow up ‘Winter of the Electric Sun’.  While the prospect of a new full album would have been very appealing, this six track offering is a welcome enough release – it’s six songs and twenty two minutes showing off the Australian dream-pop quartet’s surprisingly accessible sounds in a lean fashion, the EP format cutting down any potential filler material.

Settling for an almost drone-like mid-pace, parts of ‘The Atlantis Quarterly’ sum up TOM’s most striking elements.  The way the clanging rhythm guitars clash against an almost loopy drum (think 90s indie/shoe gaze a la Ride) is fashionably retro by the time of this EP’s release, but there’s no sense of any bandwagon jumping here… If anything, these guys sound at complete ease in their chosen dream world, as Grant Redgen’s breathy male vocals move in and out of the tuneful, yet slightly mechanical backdrop. Better still, ‘Oh Shadow a Dark Crow Grow’ has many wondrous layers branching out from a soft bass line.  While rhythmically simple, the bass sprawls from another mechanical beat, spruced by new wave keyboard bursts, creating a sprawling indie-pop menagerie.  Although musically strong, it’s Wendy Redgen’s soft voice that really carries the piece to brilliant heights, her wistful, dreamy pop tones evoking past works by the likes of Opal and Cocteau Twins (albeit with actual real words).

While all of The Oyster Murders’ material is strong, ’Nobodies’ stands as EP’s most appealing track.  Exploring their lighter side of their musical space, occasional keys cry out against a groovy drum line, while Grant taps into a light and breathy (almost whimsical) vocal style.  The end result – heavily reliant on new wave synths and clean rhythm guitar work – sounds not unlike the new-wave pop experiments of The Smashing Pumpkins’ much overlooked ‘Adore’ opus, with a touch of UK 90s shoegaze thrown in for extra dreaminess.  There’s a marvellous pop sheen here; the kind that would have made it a fixture on the UK’s ‘ITV Chart Show’ for a few weeks in the summer of 1991 [complete with a still photograph of the band swishing about in lieu of a real video].

Venturing further into the shoegaze sounds, ‘Feed Ourselves To Wolves’ is a decent off-kilter almost psychy affair, with a simple hookline and beefy drum sound lending the best moments throughout, whilst elsewhere, ‘Distant Flower Bloom’ employs some unexpected finger-picked guitar, before descending into a slow indie sounding workout, which although not especially original, sounds great in a nostalgic way.  Neither track adds much to TOM’s selection of whimsical moods, but both numbers show a tight musical unit throughout. Turning everything upon its head, completely going against any sense of predictability, the short ‘Ada Eve’ closes this EP with a minute’s worth of drones and backwards voices.  The spooky, cold atmosphere isn’t really a fitting close; it neither sounds like a lead in for things to come, nor does it pique any curiosity.  It would have been a perfect intro to this release…but as an epilogue, it’s just odd. as stated, though, maybe placing it at the front was just that bit too predictable.

‘Mourning Birds’ had the unfortunate timing of being released within a week or so of the much publicised return of dream pop legends Mazzy Star, so it presents them very much as the dream pop underdogs.  Like most underdogs, though, there are more than enough reasons for you to champion them – they bring often strong arrangements, their yin/yang of male/female voices is great, and most importantly, there are couple of really top tunes here… Despite some of its songs being obviously stronger than others, this EP may just be one of 2013’s hidden gems.