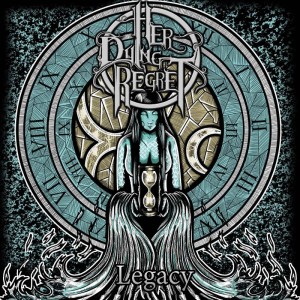 Following an intro that’s very horror-esque with its use of haunting keyboards, marching drums and synth strings, Reading based metallers Her Dying Regret launch into ‘Ashes’ – the first full track from their second release – …and the gloves are off.  With thrashing twin lead guitars and a guttural roar, the band tears into an undeniably great slice of metalcore.  The drums pound relentlessly against a downtuned guitar, topped by a duel vocal of Trivium inspired throatiness and Dani Filth-esque screech.  At the point where it feels as if something will burst, the chorus crashes through with a clean vocal and a very strong melody.  At this point, there’s no doubt that these guys are good players.   Although in a very similar style, the EP’s lead track – and title cut – ‘Legacy’ pulls all of HDR’s best features together, making the best choice for promoting the release.  The melodic chorus – delivered by “clean vocalist” Tom Melville – is among the EP’s best, while the gruff voices – courtesy of Scott London – just teeter on the good side of threatening.  With riffs strongly inspired by classic Killswitch Engage and early Shadows Fall, this is solid stuff indeed.  The twin guitars of Craig Meyer and Dan Osbourne are stellar throughout in their downtuned approach, but it’s Osbourne’s melodic edge that really catches the ear midway.  Following a brief interlude of sweeping notes, as he launches into a brief, yet sharp and clean solo, his playing is reminiscent of something more in keeping with progressive metal.

Better still, ‘The Shallow’ comes at the listener like a proverbial sledgehammer, its heavily downtuned riffs taking on a near djent style with their uncompromising bottom end.  Vocally, it’s another full-on affair, as the vocals fall somewhere between Lamb of God’s Randy Blythe and those found on ‘Elite’ by Within The Ruins’ [another unmissable slab of metal].  Predictably, the chorus opts for cleaner voices with a strong melody – very much in the typical metalcore tradition, as per Killswitch – but this time around it’s almost surplus to requirements.  The chugging riffs are so enjoyable that the shift towards the more melodic is almost distracting! Without any kind of lead in, ‘The Filthy Truth’ crashes headlong into a huge riff with a complicated time sig, nearing the more aggressive end of progressive metal.  Unusually, the clean vocals lead off here, giving the impression they might take a stronger lead appearing before the chorus, but quickly it becomes apparent it doesn’t mean that this tune is otherwise too different from the others.  As before, you’ll encounter plenty of great riffs in slightly playful time signatures with a heavy bottom end.  The clean vocals have touches of classic Fear Factory in the way they are treated – a welcome influence and great overall sound  – while towards the end, the harsher tones close the EP with a repeated refrain of “I’ve got no time in my life for this”, with effective results.  Throughout this piece – and indeed the rest of this release – drummer Tom Cox plays his arse off.  It’s a pleasure to hear a drummer who is heavily reliant on the use of double bass pedals, but seemingly not resorting to the constant use of triggers and samples.

While Her Dying Regret’s brand of metalcore isn’t particularly groundbreaking, in many ways it doesn’t need to be.  This is a band that tackles their chosen subgenre with passion and professionalism, making ‘Legacy’ a disc that can be heartily recommended.  Sometimes the road to the big leagues can be a long and tiring one, but this sophomoric effort already sounds like the work of a band accomplished enough to be on the roster at Nuclear Blast or Roadrunner Records.  Grab this at the earliest opportunity.