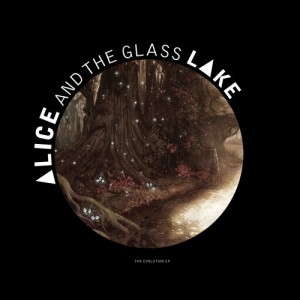 The brainchild of singer-songwriter Alice Lake, Alice & The Glass Lake explores various dream worlds of pop on this debut EP.  Taken at face value, it’s quite, quite lovely.  However, it shouldn’t escape the notice of most people that Lake’s pop fantasies and soundscapes owe so much to a few other artists who have graced us before, most notably Florence Welch and her million selling Machine.  Still, for those who enjoy very thoughtful pop, that shouldn’t – and doesn’t – make her music any less enjoyable.

There are an abundance of multi-layered keyboards and string sounds throughout these five tunes, while Lake herself taps into a wistful, almost ethereal vocal style; a style that’s perfectly suited to the music in question.  On ‘Paracosm’ – the EP’s least Flo-centric tune – she aims to transport the listener into a happy place by blending a Sarah McLachlan-esque tone with gentle electronic beats and loops and pizzicato string work, resulting in something occasionally reminiscent of UK chamber pop experimentalists Sharks Took The Rest.  Across four minutes, the mechanical loops lean towards classy electronica with occasional old-school hints (think Future Sound of London), over which a multi-tracked voice calls out into the ether.

Adopting a fuller sound, ‘Higher’ provides a more organic workout for the backing band, as Lake places her vocals (again, utilising the studio for great multi-tracked effects) against a slow and pounding beat, peppered with gently shimmering guitars and a deep sounding keyboard, representing a fuzz bass.  During the closing section, Lake repeats the phrase “you make me higher” to great effect; in fact, her voice punctuates the slow rhythm, hinting that things may pull into a more energetic finish.  Nothing really changes, and ‘Higher’ moves aside for ‘Tonight, Rest’, a number that is, at first, a glistening near ambient pop workout with Lake’s voice gliding over a rumbling groove.  The sounds rise and fall, occasionally allowing the drums to reach a crescendo, and unlike some of the other tunes, there’s less of a hook here, making it obvious that Lake is just as concerned with atmospheres and moods as she is with instantly reeling in her audience with a killer chorus.  Musically, these tunes will have an instant familiarity for those who like Florence + The Machine.  More importantly, they may appeal to listeners who like that particular band in principle, but have never really tuned into Ms. Welch’s vocal tones.

‘Luminous’ offers the EP’s best intro, as cinematic sounding piano chords chime under electronic drones.  There’s a hope that it will blossom into a piece that’s part Thomas Newman and part Eno, but before long, Alice Lake creeps in with another strong vocal.  It’s nothing much different to that of her previous performances, but there’s no doubting her voice has a charming presence – aided by multi-tracking and studio tinkering or otherwise.  Those who connected with ‘Higher’ and ‘Tonight, Rest’ – the former, especially – will find plenty to love here too. Closing the EP, ‘Coming Down’ offers a world swishing keyboard drones, near empty spaces, more shimmering keys and booming drums. The overall feel is that of a stripped back Dream Academy, before everything quickens pace and Ms Lake goes in for the climax. With the change in pace comes a natural mood shift, and somewhat predictably, the upbeat drum led arrangement has echoes of Florence…but still, it sounds fine enough.

Her influences may be glaringly obvious at times, but then so is Alice Lake’s talent.  These five tunes are beautifully atmospheric, expertly arranged and almost faultless in their delivery. For listeners who crave sophistication within their pop frameworks, ‘The Evolution’ is an EP which should be grabbed at the earliest opportunity.