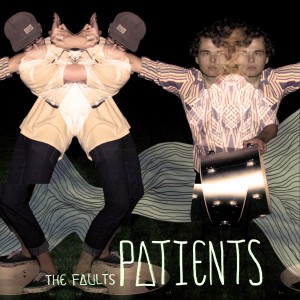 On The Faults’ debut EP (a self-titled release from 2011) the band’s two members, Oli (gtr/vox) and Tom (drums) hammered their way through four reverb-drenched songs, sticking rigidly to the confines of the two-man setup.  While their work didn’t actually bring anything of a new slant to the garage rock genre, the tunes were played with absolute conviction and with a great energy.  Their second release, ‘Patients’ brings the keen garage rock fan much more of the same.

Beginning this second EP in a really unsubtle fashion, ‘Patience’ opens with raucous drums and hammered guitar, over which Oli wails like a man possessed by demons, his voice fuzzed up to create an extra level of intensity. While fans of garage-based noises are likely to dig this, be warned: the general looseness displayed means they’re in danger of sounding more like The Strokes in a slightly drunken stupor than The White Stripes or New York’s mighty Dead Exs at their best.  Much better, ‘Peace of Mind’ mashes an early sixties Phil Spector inspired beat with a guitar jangle that’s almost got a Mexicana vibe – like something from a spaghetti western played in a garage.  Between the disjointed pieces of music, the voice has a very strong presence, bawled with very little restraint. The combination of interesting tune and vocal forcefulness makes this one of the EPs better offerings.

‘Chivalry’ is a standard issue garage rocker where, between the crashing cymbals and the threat of a lead guitar break which never manages to surface, The Faults’ play firmly to their strengths.  Slowing things down and potentially becoming a touch more interesting in doing so, ‘Summer’ brings in a slight tone of sixties pop to the song writing. With the shift in pace, Oli’s voice gets a brief opportunity to stretch out on some longer, croony notes.  Despite a stronger focus on the voice and stripping back the drums, the general tone stays within their fuzzed up remit – yes, it may sound a little poppier in its construction, but everything still comes with a truckload of reverb…and if you’ve dug The Faults’ thus far, chances are, you’ll dig this too.  The strongest – and most easily accessible track – ‘Leather Jacket’ brings more of a trashy rock ‘n’ roll aesthetic to The Faults’ sound, all groove-led drumming and spiky guitar.  Think Jon Spencer Blues Explosion circa ‘Orange’ (though with Spencer’s drunken Presley-isms replaced by something less stylised) and you’ll know where this is headed.  Upbeat and sweaty, this is the Australian duo’s finest (almpst) two minutes.

Even though perhaps three of the five songs aren’t quite as instant as ‘Quarter’ from The Faults’ previous release, there’s some ragged fun to be had from ‘Patients’.  It is not as sharp as it could have perhaps been, but rest assured, it gets better with each play. ‘Leather Jacket’, meanwhile, is a killer track – certainly great enough to make up for anything potentially lacking elsewhere.