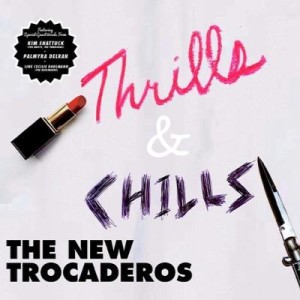 The first half of 2015 represented a very busy time for the collected members of The New Trocaderos.  In power pop circles, it seemed as you couldn’t move very far at all without seeing one of the band pop up somewhere. Vocalist Brad Marino and guitarist/vocalist Geoff Palmer released a full-length album by their “other” band The Connection; bassist/vocalist Kurt Baker played a whole bunch of live shows and released his first live LP, while previous New Trocs singles and EPs were gathered together as ‘Frenzy In The Hips’ – a full length release of unmissable quality.  Among all that, chief New Trocs songwriter Mike Chaney was beavering behind the scenes, shaping up a new batch of songs. The resultant collection, ‘Thrills & Chills’ – the first “proper” full-length from the Trocs – is a belter; it’s songs are a small step up from previous works and provide a welcome addition to any power pop/retro pop record collection.

Perhaps closest to The Connection, ‘I’m So Bad’ is a stomping seventies rocker, heavy on the rhythm guitars, presented  in a way that makes them sound not unlike Watts.  Any comparisons to The Stones are stoked farther by a cheeky namecheck of Keef before a nod to the ‘Start Me Up’ guitar tone creeps in intermittently.  It’s a track that fully achieves its goals despite being one of the album’s weaker offerings.  With Kurt Baker stepping up to the mic, things are shifted into high gear for the rollocking ‘Love and Hate’, an absolutely superb tribute to the kind of trashy rock practised by The Real Kids.  The Trocaderos are on fire throughout these three minutes: Baker’s distinctive and curly voice lends a new-wavish quirk, while Kris Rodgers hammers the high keys on his piano as if he could break into ‘Great Balls of Fire’ at any second.  The guitars are sharp – the crisp production values really make them come alive – and Baker’s careening, lovingly messy solo is an inspired choice and just adds to the heat – already in danger of reaching boiling point.

Hammering four chords and a repetitive hook, ‘By The Balls’ tells a tale of woe regarding alcohol, and in a most unsubtle fashion. While this song could be accused of labouring a point lyrically, it comes loaded with another decent musical arrangement. The guitars are fiery, with strong string-bent leads and some top-class r’n’r raucousness, while the group vocals highlight the variety of voices within this musical troupe.  Tapping in to similar gang vocal beefiness, ‘Hey Big Boy’ thunders along with a rolling riff and an energetic guitar solo.  With Marino in particularly good voice and Rodgers’s piano spot a winning exercise in how to fill a few bars in a busy fashion without excess, it’s a great workout.  If this sounds like it’s somehow in danger of being a rehash of ‘Love and Hate’, fear not, since a guesting horn section lend some brassy class – and in some ways steals the show.  Slowing down for a tune that sounds like a Phil Spector tale of heartbreak retooled by The Modern Lovers, Palmer takes the centre stage.  His slightly snotty delivery is perfect for the job in hand; it has a retro tone, but – like so many of the power pop bands that inspired the style – the results are pretty much timeless.  It could be Joe Jackson in 1979 as much as the work of the Kurt Baker Band thirty years later.

With Chaney’s songs keen to explore various avenues of retro pop, ‘Crazy Little Fool’ trades in the crashy sounds for a smoother approach, complete with acoustic guitars and a ringing twelve string.  Although far more focused and vocally superior, there are hints of The Queers’ take on 60s ballads teasing throughout, while a well-crafted harmony vocal (featuring The Muffs’ Kim Shattuck) lends an extra sweetness and bubblegum edge.  As the last notes fade and the harmonies pull together for a warm and rising climax, you may find yourselves feeling you’ve heard this song somewhere before.  …And perhaps, in a fashion, you have, since – far more than The Connection – The New Trocaderos’ world is one that celebrates the classic sounds of yesteryear. While each song could effectively be labelled a homage to the music Chaney loves, here, it’s done with an extra knowing wink.  A second bubblegum infused number, ‘Like An Angel’ shows this love of the past just as strongly with Palmer clearly enjoying every moment.  It doesn’t add much that’s particularly new to this mix, but the attention to detail in the harmonies and Byrds-eque guitar flourishes are lovely.

Going for bouncy power pop aplenty, ‘Oh Boy (Today Is My Birthday)’ finds Baker tearing his way through a rockin’ number that celebrates that feeling of an upcoming party.  The retro high energy you’ve come to love from KB is here in abundance, peppered with that extra old-school charm that sets Chaney’s writing apart from those other projects.  With a lean and mean arrangement, this would be an album standout, but bringing back those horns for a rousing finish ensures it’s an instant Troccy classic.  Closing with some bar-room rock, complete with the necessary bluesy swagger, ‘Business To Tend To’ weaves around a clanging rhythm guitar and a walking bassline, an arrangement that in the hands of lesser musicians might just come across as tired.  The Trocs have had the good sense to pep up such a tried and tested idea with some sprightly harmonica work and a touch of piano which, between them, is more than enough to give things a lift.  The inclusion of a couple of particularly aurally stimulating guitar breaks and a brilliantly sneery vocal (courtesy of Marino) ensures that the band leaves us with something that sounds like a great homage to New York Dolls.

Sharply produced and with choruses designed to stick with the listener in double quick time, ‘Thrills & Chills’ is almost guaranteed to please fans of shamelessly retro power pop.  Keen to pummel each hook into their listener until  they’re grabbed firmly “by the balls” – to borrow a useful phrase – The New Trocaderos have an absolutely killer disc on their hands…and the bastards probably know it too.