At the end of September, US swing band Cherry Poppin’ Daddies embark on a European tour to promote their 2013 album ‘White Teeth, Black Thoughts’ (issued in the UK in 2014). The tour includes a rare visit to the UK – the full list of dates can be found here.

To coincide with the tour, they’ve also issued a new Addams Family themed video clip for ‘Fly Me To The Moon’ which can be seen below.

END_OF_DOCUMENT_TOKEN_TO_BE_REPLACED 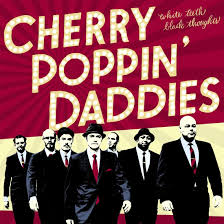