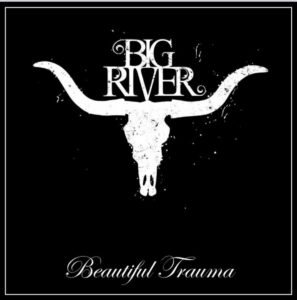 The extended periods of pandemic lockdown in the UK took their toll on most bands, but for Kent-based blues rockers Big River, that period of instability between 2020 and ’21 was particularly tough. Despite releasing their debut album ‘Redemption’ in 2019, they were still heavily reliant on regular live work to keep up momentum. Without access to venues and audiences, they were in danger of losing traction. The band suffered a further knock back in March 2021 when it was announced that long-serving vocalist Adam Bartholomew would be leaving the fold. For many, his big presence and big waistcoats had been a vital part of the Big River live experience.

This period of uncertainty also brought some major positives, too. Firstly, the arrival of Bartholomew’s replacement – Adam Barron, previously of the Mick Ralphs band – gave Big River and even stronger voice, and as an accomplished songwriter, a new sense of melody. Secondly, a return to the stage showed them in an even better light. Summer shows at A New Day and Alfold Rock & Blues Festivals were very well received by both fans and newcomers alike. It was clear that Barron was a perfect fit, ready to take the band onward and upward.

The band’s second studio release is everything they have been striving for. From a couple of wobbly singles, through a promising-but-not-perfect album, and a strong AOR detour on ‘Why Should I?’, fans have experienced a better Big River each time out, but ‘Beautiful Trauma’ finally presents a Big River that feels one hundred percent natural.

Released as a single ahead of the EP, ‘Don’t Hold Out’ opens with a simple riff played on the ukulele. Despite the uke being a beloved throwback to somewhere around 2013 and not being associated with Big River’s dirty blues rock sounds, Barron makes it work, using it to add extra layers of melody. This tempers the rock with an almost dreamy pop that underscores the main riff. Even the signature dirty blues has shifted to a more palatable boogie rock with a ringing tone here, but Damo Fawsett’s more restrained guitar sound merely compliments both the buoyant melody and Barron’s huge, curling vocal – which, obviously, is out there, front and centre. You will, of course, find plenty of familiarity here, too: the bass runs are muscular yet melodic and – eventually Damo reverts to type with one of his biggest solos to date, throwing out bluesy notes that dominate the middle of a great track. During the second half, it becomes more than clear that this rejuvenated band are able to really gel, but it’s new boy Barron who’ll likely leave the biggest impression: from the outset, his very 70s approach to vocals shows off the kind of old style grit that Big River have always sought, with the kind of range that suggests years of training and practice.

Far more in keeping with the Big River of old, ‘The Long Way’ is a massive bluesy stomper, which opens with a repetitive riff loaded with grit. Over Damo’s circular groove, the rest of the band springs into life, especially drummer Joe Martin, who uses the four minutes to alternate between a massively crashy sound and some brilliant militaristic fills. Taking a couple of verses to warm up, the track eventually reaches its peak via a steaming lead guitar break underscored by a busy descending bass riff, courtesy of Ant Wellman, captured during one of his last ever recording sessions with the band. In terms of a band now pulling in the same direction, this sounds so much more professional than before, and yet there’s still a pleasingly old fashioned core that shows a strong link with a couple of ‘Redemption’s best numbers. With hints of early Black Stone Cherry peppering the heavy Big River groove, this is set to be a live favourite.

Cranking the volume a little more, Damo leads the charge into ‘Slow Burn’ via a massively retro riff that mixes a bluesy sheen with a real sense of force. The last track to be recorded for the EP, it features new bassist Simon Gardiner, who appears to have found his place within the Big River ranks somewhat effortlessly. In many ways, it’s the pinnacle of the sound that the band have actively sought since 2018, but obviously, there’s more at stake than a great riff. Shifting into a rocker that takes a pinch of The Black Flowers and melds it with a smidgeon of Taste, it’s got a defiant old-school heart that beats furiously, and a live in the studio sound brings out the best in a rather aggressive rhythm section. The bass sound throughout the number is especially good, and not to be outdone by the assembled musicians, Barron slips into a slightly more gravel edged voice to suit, turning in one of his best performances this time out. This is the kind of track that hits from the start, but its the coda which elevates it to being something special, when Damo explores a multi-tracked guitar sound – showing his love of Skynyrd, but replaying it as if it were a little more Lizzy-esque – whilst Adam, deep in the mix, adds a very old fashioned vocal wail. As with a lot of Big River’s tunes, this doesn’t aim to break the mould or take rock in a new direction; it merely seeks to deliver a classic rock sound with some real balls, and on that score, it’s certainly a winner.

Last up, the title cut switches the mood to something more melodic. A soulful blues, very much in the vein of some of Whitesnake’s early cuts and an aching ballad from Gary Moore, the band sound incredibly mature. Damo’s cleaner tones show off more sophistication than before, and a great empathy for Barron’s voice, which ranges from impassioned cry and to full blues roar, depending on what’s required, whilst the rhythm section maintain a pleasingly sedate presence. There’s a lot to love here, and although it might at first seem as if things won’t get better than the verse (pulling bits from ‘Ain’t No Love In The Heart of The City’ and the feel of B.B. King’s ‘Hummingbird’, if not the melody), Fawsett steps up with a couple of cracking solos. His first settles for being warm and melodic, in keeping with the core of the track; the second finds him reaching for a little distortion, making good on the promise first heard on the best parts of ‘Redemption’. It may be more of a slow burner, but in time, it’s a track fans will love. It joins ‘Long Way Down’ as the EP’s highlight, and it’s easy to imagine it becoming one of the Big River staples over time.

‘Beautiful Trauma’ may only be a four track release, but it provides a strong showcase for the new look Big River. It’s much slicker, but without sacrificing the crunchiness that fans have come to love. With a bit of grit, some great melodies, boundless determination and a far greater vocal presence, on this EP, these lads have finally matured into the kind of band that fans knew they could be.