It’s 8:30 on a Friday night and Venus Grrrls have just taken to the stage at Ramsgate Music Hall. The Leeds band are unknown to most of the audience, but it’s great to witness the venue already packed to the rafters. If this were a London gig, most of the paying crowd would still be in a nearby pub, or standing in the venue bar talking, and paying the musicians very little attention. The seaside crowd are often more thoughtful and, looking at the gathering tonight, this is no exception. It actually feels even more crowded than when Electric Six and Red Snapper played at the small venue at the end of 2021. At a time when people are still concerned about Coronavirus, or the cost of living has made casual nights out difficult for many, it’s a sight that really restores hope.

Above a heavy droning sound, vocalist Grace ‘GK’ Kelly wobbles as she hits her first few notes, but as the huge sounding ‘Freaky Friday’ settles down, Venus Grrrls introduce themselves with a meaty slab of alternative rock where dark, keyboard heavy passages appear to be well contrasted with a crunchy guitar, but it isn’t until the middle of ‘Hate Me’ – a modern riot grrrl anthem about the double standards regarding what’s expected from male and female musicians – things really fall into place. One of the key tracks from the band’s current EP (2021’s ‘Potions’) the performance conveys a genuine swagger with the drums crashing with ten times the oomph of the studio track, and the verses driven by an incredibly solid bass sound, courtesy of Hannah Barraclough. Heading into the second chorus, GK’s vocals intensify and the confidence grows, suggesting the rest of the set will not disappoint.

…And sure enough, from this point, the band hits everything pretty much square on, with ‘Sudocreme Queen’ injecting a few punkier riffs into the alt-rock noise, and the yet to be recorded ‘Aries’ whipping up a mechanised groove that appears to blend the guts of Garbage with elements of Envy of None, before exploding into a huge chorus that sits far closer to the crunchy rock the band have already made their own. The quieter ‘Amy’ – an important number about mental health awareness – gives the set even more contrast via its opening verses where shimmering dreampop guitar lines underscore a thoughtful vocal. It’s good to experience the band working in a quieter mode, and this track especially suggests that any future endeavours could find the band evolving into an even stronger unit both lyrically and musically. The massive riff coming through at the end makes the band sound heavier and more aggressive than before, and if anyone had been previously unsure of their abilities to pack a punch, this will leave no doubt, and with GK standing proudly centre stage and seeming unshakable, it’s clear this is a band on the up.

For those truly interested in the nuts and bolts of the Venus Grrrl sound, though, all eyes should be on guitarist Jess Ayers. A slight, brilliantly androgynous presence on stage right/audience left, Jess fills the bulk of the best material with a great tone, whether carving interesting shapes on a fretboard with very long fingers, or stomping on various pedals and throwing out massive chords. Best of all, she spends time crouched, oscillating knobs and manipulating switches in the manner of Sonic Youth’s Lee Ranaldo, or the legendary Kevin Shields, providing heavy shoegaze and noise rock codas to a couple of the evening’s performances. These loud, yet nuanced sonic textures are often absent from their studio counterparts and they really give the live performance a very different feel.

With a climax reached via the catchy ‘Goth Girl’, a fine mix of rock-pop hooks and light industrial grooves, the still unreleased ‘Violent State of Mind’, and a throwback to 2019’s pre-pandemic single ‘Deranged’ – another rallying cry for equality, delivered with a brilliant sledgehammer of a lyric – the set plays out like the ultimate crash course in Venus Grrrls’ work to date.

It’s only been a short eight song gig, but almost everything has been approached with enthusiasm, from both a band and audience perspective. It’s never an easy job being the support band – most of the audience haven’t paid to see you; you’re just the evening’s wildcard which will hopefully yield something interesting – but on this occasion, Venus Grrrls take the difficult task and smash it. As will soon transpire, they’ll actually outshine the evening’s headliners Salvation Jayne, who, despite a lot of grit and a natural ability to make everyone in the crowd seem like their best friends, are plagued by technical issues. Salvation Jayne come armed with great material, but seem blissfully unaware that about ninety percent of the vocals during their set aren’t actually audible…

If Venus Grrrls are playing somewhere near you, it’s worth making a special effort to see them, and especially while you’re able to do so in venues that are intimate and affordable. You’ll be glad you did. 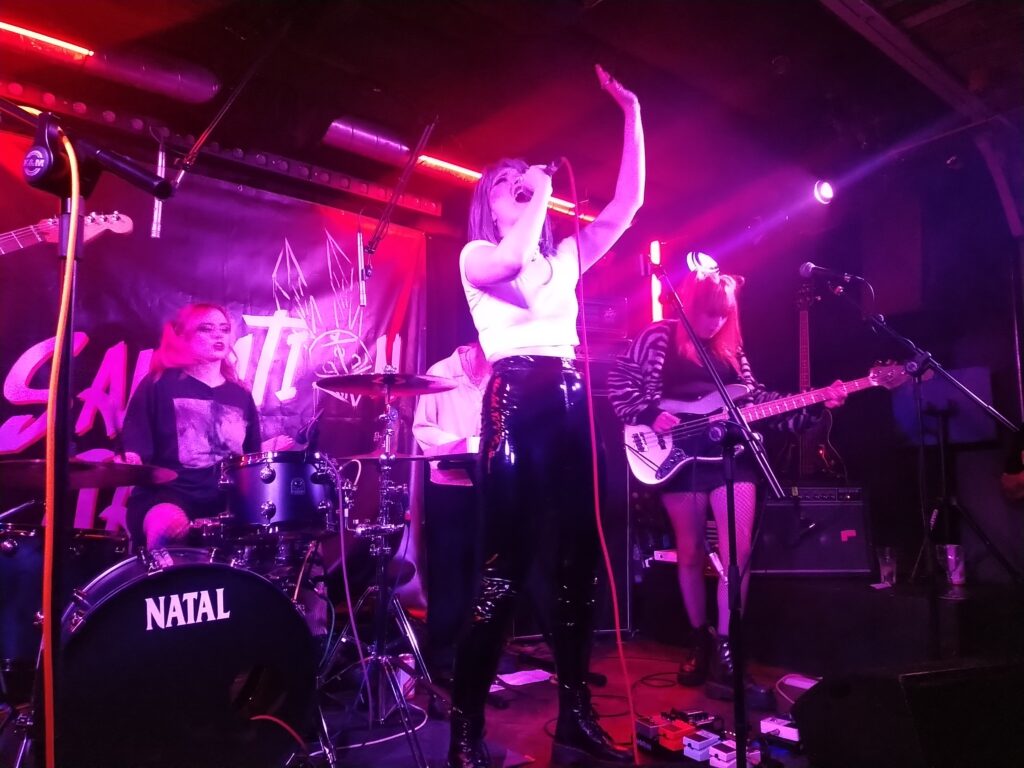