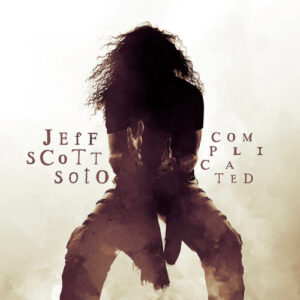 Over thirty years after his breakthrough with Yngwie Malmsteen, Jeff Scott Soto released one of the greatest albums of his career. At the point where most veteran vocalists could be accused of going through the motions, 2020’s ‘Wide Awake In My Dreamland’ was a rich, melodic treat; the kind of album that reminded audiences why they still loved AOR and melodic rock – despite many of the scene’s releases being so workmanlike. It also provided solid evidence that Soto still was still in possession of a fantastic set of vocal pipes. The global pandemic meant the album couldn’t be toured in the usual way, but Jeff filled the time with a surprise release, ‘The Duets Collection, Vol. 1’ a few months later, delighting the fans and cementing his place as one of AOR’s most beloved talents.

His 2022 release ‘Complicated’ taps into the same vein of melodic rock as ‘…Dreamland’, and that in itself will be enough for most fans to love it. It could be argued that a few of its tracks aren’t quite as immediate – that’s understandable given ‘Dreamland’s huge choruses and near flawless performances – but it definitely adds another gem to the JSS catalogue.

‘Last To Know’ opens with an atmospheric drone, then into a semi-proggy riff as if they keys are channelling Mike Oldfield. It’s all a bit grander than you’re probably expecting from Jeff, but it’s merely a red herring. Once the main riff emerges, the band settles into a brilliant slab of melodic hard rock, somewhere between Takara at their most forthright and a deep cut from one of Jeff’s previous albums for the Frontiers label. So far, so good. …And then Jeff starts to sing. There’s something very much amiss. His sense of power is still immense and his phrasing is immediately recognisable, but his tone is much deeper than before; that of a performer conveying a slight husk. It’s not a bad voice – it’s still strong in its own way, and Jeff isn’t holding back at all; it just doesn’t sound quite as you’d expect. After tuning in, there’s a lot to enjoy via Soto’s energetic delivery, and in some ways, his smokier approach works well with the speedier melodic metal riff taken in hand by guitarist Fabrizio Sgattoni, it just isn’t peak Soto. Nevertheless, looking at the number on its own merits, the main riff is terrific, with occasional horsey squeals to inject extra energy. Fab’s featured solo is jaw-dropping – a flurry of 80s metallic anger dropped against something more melodic – and Jeff really gets the best out of a massive, harmonious hook.

The second number ‘Disbelieving’ presents a much more settled band. The guitar riffs combine melodic metal and funk, very much calling back to JSS’s brilliant ‘Love Parade’ album and bits of the Talisman catalogue. With more room to move, Jeff finds his old voice once more – working through some really soulful melodies whilst crashing drums and funk bass lines contrast each other, creating a massive musical backdrop. Session guy Alessandro del Vecchio is no match for the much missed Marcel Jacob when it comes to rattling four bottom end strings with intent, but he does a fine job in keeping a brilliant groove going, and Fabrizio occasionally drops chopping riffs as if the funk metal boom of 1990 never died. From first listen, it’s clear that these musicians work well together – though likely remotely – and that Soto is at his most natural when faced with something carrying a massive groove. With another multi-layered vocal filling a very 90s chorus, this could’ve fit easily onto any number of Soto albums from yesteryear, but that will only mean that fans will discover an instant favourite.

The synth heavy title track changes the mood yet again, but it’s great to hear Jeff working within a musical framework that’s a little closer to the Eyes and Joe Lynn Turner era Rainbow sound. The stabbed keys and mid-tempo riff construct classic AOR, and although some of Fabrizio’s riffs are a little tougher than this kind of classic melodic rock might actually need, the melodies are very strong. Chorus wise, it takes a couple of plays before things start to stick, but hearing Soto cry against the very 80s sound brings back memories of the early Takara recordings which is a listening reward in itself. Despite the track featuring one of Jeff’s strongest vocals this time out, he’s actually in danger of being outshone by Fabrizio offering very bluesy guitar solo, full of sweeping notes and even a moment where he sounds as if he’s about to break into the Neal Schon lead from Journey’s ‘Who’s Crying Now’. For the more curious listener looking to try one or two tracks from this album as a taster, this is definitely a recommended listen. It doesn’t break any new ground for Jeff, but fans will undoubtedly consider it an album highlight. ‘Thank You’, meanwhile, teases with a poppier style, carrying a rhythmic undercurrent that’s very reminiscent of mid 80s Journey, before exploding into a perfect melodic rock chorus where the guitars soar, and Jeff’s voice has plenty of room for manoeuvre, and plenty of opportunity to shine. This kind of melodic rock is little more than bread and butter stuff for the performer and fans of the style will instinctively know what they’re getting, but even when offering something a little more from an AOR mould, the results are superb.

‘Home Again’ injects a few more of the driving, melodic metal edges present on the opener, but does a far smarter and more natural job. The jagged rhythms often give Fab an ideal opportunity for some fretboard melting, but his more aggressive style is deftly offset by some huge melodies, often featuring Soto in great shape. Although Jeff taps into a verse melody that could slide into Iron Maiden’s ‘Flash of The Blade’ at a couple of points, he brings everything back to something very much his own via a chorus that’s straight from the Talisman back catalogue, which would be enough to make this a stand out track. Keeping a closer ear, it’s nice to hear the instrumental break brazenly dropping into an old Malmsteen melody – somewhat cheekily, but never in a way that seems forced – and to experience drummer Edu Cominato cutting loose via a hard edged rhythm. With the whole band pulling together to create something really tight, this is definitely the album’s best “heavier” offering, and a great example of a band working together very naturally.

No melodic rock album is complete without a big ballad, and on that score, ‘Until I See You Again’ gives this long player something very traditional. Broad piano melodies call back to Survivor’s best tear jerkers, and Soto’s crying tones swoop effortlessly with the sparse melody creating something that’s obviously by-numbers, but without compromising on a fine melody. Bringing in a counter vocal, a steady beat and acoustic guitars to flesh out the sound, Jeff allows himself to emote a little more, and eventually reaching the chorus, the number sounds like something from an old 80s film, which should delight fans of the style. Jeff’s vocals are great here, but Fab’s guitar parts are greater, with a superb twin lead and soaring solo used to create a very effective climax. ‘Complicated’ arguably features a handful of much better songs, but this shows how there’s still more mileage to be had from the “rock ballad 101” mould.

‘Love Is The Revolution’ promises something a little different with an intro throwing out sitar melodies and a broader musical palate, but eventually reverts to type with a Led Zeppelin meets Rainbow meets Talisman hard rocker that JSS takes in his stride. There are moments where the vocalist could be seen as going through the motions, but when his voice sounds as perfect as it does here – barely different from some twenty years previously – there’s plenty for fans to get excited about. Although his bigger notes will always be the aural lynch pin for the whole track, huge kudos must be given to the rest of the band, with Fabrizio effortlessly sliding between rocky and bluesy tones, occasionally channelling Blackmore, and Del Vecchio dropping in a couple of thunderous basslines along the way. In closing, ‘Obsession’ gives an already solid LP another last minute highlight. It sounds similar to several uptempo workouts from ‘Prism’ and other slightly later JSS albums with a touch of early Talisman thrown in for good measure, but its familiarity is often what makes it great. A huge, harmony driven chorus lifts an already enjoyable rocker, and Fabrizio’s lead work is especially on point, with the musician filling several bars with musical gymnastics that appear to be very much inspired by First Signal’s Michael Palace. Jeff, meanwhile, sounds in his element, working through a melody that’s familiar yet still delivered with a great passion.

Jeff isn’t especially trying anything new with ‘Complicated’. He knows what people expect from him and is happy to deliver. Despite wobbly beginnings where the band are, perhaps, trying a little too hard to create an impression with a lot of bombast, this album features its fair share of great material. It’s far to say that if you’ve stuck with Soto through his many explorations of melodic/hard rock and funk over the years, you’ll find a lot to love here – tried and tested, or otherwise.