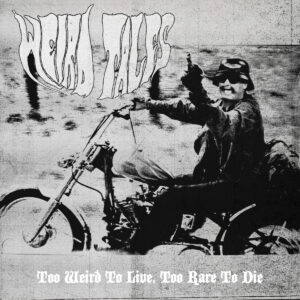 At the beginning of 2021, Polish doom metal band Weird Tales released an EP of material based around classic blues numbers. Their heaviness was without question; their lack of compromise even more so. Unfortunately, the end results were not only as scary as hell, but actually insulting to the legacies of the Delta blues pioneers. Good or bad – or in this case, possibly awful – they definitely made an impression.

Issued a few months later, the recordings collected on the ‘Too Weird To Live, Too Rare To Die’ EP are every bit as intense. However, since the tracks are constructed from the band’s own original source material, the moments where the riffs take a sledgehammer approach make far more sense. The insane levels of distortion applied are far more sympathetic to the job in hand without being in the slightest any more commercial, and more importantly, there are dark, quiet atmospheres at play that the previous recording never really allowed for. Overall, it results in far more of a balanced work.

The eleven minute ‘ZZ’ features some genuinely great moments. The intro is especially cool, with bassist Kriss wringing the hell from his four strings as he sets up an almost funky groove. Hearing him play in this unaccompanied way is to experience someone who seems utterly at one with their instrument as he channels something akin to Geezer Butler’s legendary solo at the end of Black Sabbath’s ‘Beyond The Walls of Sleep’. The arrival of the rest of the band brings the kind of obtuse heaviness Weird Tales have made their trademark, but again, it’s much better than before, presenting a slow, distorted grumble augmented by howling leads set against a heavy cymbal-free drum sound. Moving into the meat of the track, the distortion is so intense, the louder parts of the “live in the studio” sound reach breaking point, but you just know the band are in complete control. An echoing vocal threatens to derail everything, but the riffs persist, creating some solid goth inflected doom as they power through each bar, until venturing into a very European sounding riff with a theatrical bent, not unlike a much heavier version of the 1930s obsessed moments from Roxy Music’s ‘Bitter Suite’ from 1974. This shows a particularly quirky side to the band, but it isn’t long before they change tack again, working a brief stoner swagger, before finally setting on an echoing and very traditional doom riff that really works Dima’s guitar to the limit. Throwing in a couple of bluesy leads, he lightens the arrangements drudgier elements very effectively, but never enough to make this in any way commercial.

All of that would make a decent number by itself, but there are still several minutes to go, and an almost equal number of other ideas to road test along the way. A fast, instrumental groove allows drummer Smoku to temper the stoner vibes with some serious funk very effectively, before the trio head into a heavy as hell swamp of slowness and, eventually, an eastern sounding riff played with absolute conviction. The way Dima adopts a clean tone and an almost floaty sound to compliment some lovely fluid undertones from the bass suggests that, for all of their noise and bluster, these guys can really play…and, rather perversely, are actually able pull off much bluesier sounds than were ever heard on their blues EP. A brief drum solo showcases more of Smoku’s unexpected jazz and funk influences, before the lengthy jam fills several bars with an Electric Wizard-esque crunch to ensure a trad doom finish that’ll please a broad spectrum of genre fans.

Shifting into ‘GG’, things turn uglier with a piece that quickly sets up a doom/hardcore hybrid that has an impressive heaviness, but not anywhere near as much light and shade. On the positive side, it shows off their power with a riff and there’s some cool bass work to be heard, but the hard edged growls and heavily treated vocals occasionally make everything really hard going. If you can make it to the halfway point before the band beats you into submission, there’s also an interesting lead guitar break that adds a bluesy touch to an old school proto-metal sound, but it’s definitely the more marginal offering here. It’ll surely appeal to those who’ve been unfazed by Weird Tales’ most intense stuff in the past, but it isn’t really geared towards breaking the band to a wider audience. Then again, to expect their crushing brand of doom to do so would surely be missing the point.

In a little over fifteen minutes, this release presents most of Weird Tales’ doom metal variants in one (not always) easy to digest package. The epic scope of ‘ZZ’ is guaranteed to make it a fan favourite, and even though things don’t always hit the mark, most of this recording suggests the Polish doomers have grown in both confidence and ability in a really short space of time. Obviously, this is a release that’s for doom obsessives only, but in everything it represents, ‘Too Weird To Live…’ is definitely the best Weird Tales recording to date.