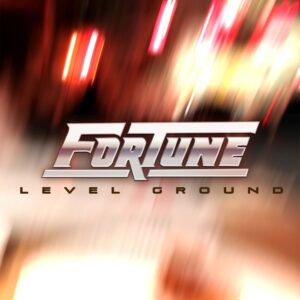 At the peak of AOR’s popularity in the 80s, there were a lot of great bands and artists whom, for whatever reason, never quite made the big time. They had the major label deal; they had the songs, and yet, struggled to make it into the first division with Journey and Survivor, and secure that place in record buyers’ long term memories. Perhaps it was just that in those days the melodic rock scene was over subscribed. The lack of sales for albums by Aviator, John Philip and Baxter Robertson – to give just three examples – certainly had nothing to do with a lack of talent.

Of the many short lived acts to have a major label deal in the 80s, Fortune were arguably one of the greatest. Their debut LP, issued on MCA in 1985, is absolutely loaded with the kind of choruses Survivor would’ve taken to glory, and its huge melodic hooks are as massive as Robert Tepper or any of the Scotti Brothers Records soundtrack fillers would have commanded at the time. Despite this, the album remains virtually unknown outside of AOR/melodic rock fan circles. It didn’t even get a proper release on CD until 2004. Following the band’s split, vocalist Larry Greene rode on the coat-tails of genuine fame when a couple of his solo tracks appeared on the AOR-centric soundtrack for Stallone’s cult move ‘Over The Top’, but those barely hinted at Fortune’s former greatness, and the same applies to the vocalist’s later work with melodic rockers Harlan Cage.

Fortune were special. Their fans always knew it. Perhaps just as importantly, albeit belatedly, the band seemed to know this too, and a new Fortune – minus keyboard player Roger Scott Craig – convened in 2019. Their long awaited second album, although not quite of the same standard as their should’ve-been-massive debut, was a very enjoyable affair that showed how guitarist Richard Fortune had lost none of his melodic flair over the years. Larry’s voice was, naturally, a little more ragged, but it was abundantly clear between the wall of guitars and stabbing 80s keys that Fortune were very much back in business. As before, the world at large didn’t really care, but faced with a very different industry, and with the internet’s help, that didn’t matter – ‘Fortune II’ ended up being highly praised by its target audience.

Their 2022 release ‘Level Ground’ ploughs the same melodic furrow as before and the results could be seen as somewhat predictable, but thanks to some solid musicianship and a huge chorus or six, it retains most of Fortune’s massive AOR appeal. ‘Silence of The Heart’ wastes no time in exploring a few of the band’s bigger sounds via a grandiose semi-orchestral intro where waves of synth strings collide with sweeping piano, but it’s not long before everything drops into a very 80s slab of melodic rock, where a solid four-four rhythm pushes forth with a selection of pompy keys and chugging guitar lines. Beneath the solid groove, everything is lifted by some really complex bass fills – still suggesting that Fortune are a cut above a lot of similar acts. With a great arrangement in place, its a pity they couldn’t have come up with a less repetitious chorus – the song writing here is especially basic – but Greene does his best to sell the song throughout, and with a voice that’s much brighter sounding than on ‘Fortune II’. With a cracking lead guitar break, there’s enough here to create a solid opener, but there’s a nagging feeling of something being slightly amiss, and for the listener, a hope that things will improve.

…And they do, pretty quickly, with ‘Judgement Day’ working a melodic yet tough riff, underscored by keyboards that call back to Mark Mangold’s work with Touch, and one of Larry’s greatest vocals since the eighties. Sure, his voice still conveys the timbre of an older performer, but throughout the number, he shows off all the power and range needed when curling a slightly smoky tone around a broad 80s rock arrangement. Listeners who’ve spent years listening to bands like Aviator and Two Fires won’t find anything new, of course, but between Bob Emmett’s keys rising and falling within a massive chorus hook and Richard Fortune lifting everything with a superb guitar solo that straddles a fine line between showboating and busy melody, it’s pretty much classic Fortune for the twenty first century. Also superb, ‘Riot In The Heartland’ offers a huge, slow burning piece of rock where a mid tempo groove sets everything in place for Greene to work a strong vocal throughout a very narrative hook. As with some of the very best Fortune tracks, several listens are required before the best in the song really presents itself, and despite being hampered a little by the usual Frontiers production values, there’s some great organ work to be found swirling beneath parts of the main groove, a cheeky descending melody that sounds as if everyone’s taken tips from Benny Anderson, and – eventually – a strong marriage between bell-like keys and a slightly phased lead guitar that serves up some of the album’s greatest playing.

A definite highlight, ‘I Will Hold You Up’ finds Fortune taking on a Toto-esque number, complete with warm bass and bright piano lines. Richard’s rhythm guitar work is much grubbier than most of Steve Lukather’s finest efforts, but his work throughout this track is very impressive, especially when indulging in crying leads with a slightly bluesy edge. These lead guitar moments elevate an already great track even further with almost as much influence from Toto as old Fortune numbers. Greene, naturally, is able to soften his voice to suit, but there are moments when all of this almost pales against the aforementioned piano melody. Adding to the all round Toto-esque nature, Steve Porcaro guests, and his chosen melody not only sounds like something derived from ‘I Won’t Hold You Back’, it’s easily recognisable as being played by someone from within the Toto ranks as opposed to anyone else. His guest spot, naturally, makes this much better than it would have been, but there’s a superb song here regardless. The title cut, meanwhile, reawakens some of the punchier moods from the Fortune debut way back when, with a thunderous drum part and chopping guitar riffs leading the charge, whilst Greene puts in a few hard yards vocally, reaching for some massive notes on a huge pre-chorus, and sounding pretty good for it. As before, this kind of full throttle hard rock deserves a much cleaner production/mix than it actually gets, but there are times when the band shines through the wall of noise; not least of all when Richard drops in a couple of huge, effects-heavy solos that show off some serious chops.

‘Orphaned By The Storm’ also opts for something much rockier, giving drummer Mick Fortune a solid presence throughout, and really capitalises on a massive chorus that could be a match for a good number of AOR bands at the time of release. Across a solid four minutes, fans should be able to enjoy a solid number, even if most of Bob’s keys are buried in a musical swamp. Audio quibbles aside, the combination of very European sounding riffs and another big vocal work together confidently. ‘I Should Have Known You’d Be Trouble’, meanwhile, settles into AOR by numbers, where stabbed keys and power chords collide on a Survivor-esque number that gets to the heart of the twenty first century Fortune sound without too much effort. If this were a genuine 80s recording, the melodic chorus hook almost certainly would have been countered with a massive harmony instead of a non-committal vocoder-ish noise, but it’s a minor point, especially when there’s a superb lead guitar break in hand, and a coda where Richard sounds almost like he’s channelling David Gilmour circa 1984. These numbers don’t necessarily reach the heights of ‘Judgement Day’ or ‘I Will Hold You Up’, but when heard together, they supply further evidence that this is a more than solid release, and proof that most of the music which the reformed Fortune turn their collective hand has a great strength, even if it never reaches the majesty of their 80s debut.
.
Those who loved ‘Fortune II’ will undoubtedly love this record – and, in all fairness, there is much to love here. The final mix lacks some of the bigger 80s sheen this sort of material truly deserves, but in terms of both song writing and musical craft, it’s still hard to find fault with most of the actual songs. In any other year, there would have been a good chance of ‘Level Ground’ being pretty much the best AOR album to hit the shelves: it’s big, cheesy, carefree and retro, and sounds all the better for it. Released just a few weeks after FM’s almost flawless ‘Thirteen’, it doesn’t sound quite so strong at first, but stick with it; if you came looking for a huge, politics-free old school AOR distraction from an ever troubled world, Fortune will be only too happy to oblige – and with great style.