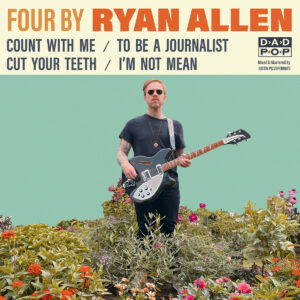 The semi-prolific musician returned at the beginning of 2022 with the ‘I’m Not Mean’ EP (aka ‘Four By Ryan Allen’), a recording that sits comfortably among his pop influenced affairs and DIY home recorded experiments and, at its heart, his more ardent followers will discover some deftly written indie tunes. The best of these, ‘To Be A Journalist’ takes ‘What A Rip’s shameless power pop core and adds plenty of speed, ending up sounding like a homage to the punchier parts of a Britpop past (bits of Sleeper’s ‘Smart’ LP cut through via some brilliant ringing guitars) and the more recent jangle pop/indie rock of bands like Fightmilk and Muncie Girls. Allen’s within his comfort zone, of course; lyrics regarding being obtuse when burying bad news and being subjected to others’ views carry the same levels of snark as bits of his past work, but any sneering qualities are more than balanced with some great melodies here. The fact that he’s been able to meld a line as semi-obtuse as “Do you mind how I get the story” to a melody worthy of ‘Thirteen’ era Teenage Fanclub before wedging in a brief solo that jangles and rings like the very best Posies is a gift in itself, and even if a reverbed vocal makes Ryan seem as if he’s in another room, the overall package delivers some brilliant, very punchy rock/pop that lovers of the style shouldn’t miss.

On the slightly poppier side, both ‘Count With Me’ and ‘Cut Your Teeth’ sound like natural successors to ‘What A Rip’s own retro pop and on the former, especially, the way Ryan works a very buoyant melody actually makes something very formulaic sound fresh and inviting. In overlaying a semi-acoustic tune with a bell-like melody from the second verse onward, the arrangement’s straight up jangle takes on a particularly pleasing lilt which shows off a man who understands the invaluable qualities that small embellishments can bring. Both lyrically and vocally, the twee stylings sometimes sound like a crunchier update of bits of the Belle & Sebastian catalogue, but always with Allen, there’s enough of his own heart within the song, and it could easily be argued that – at least in terms of catchiness – this is more effective than anything B&S’s Stuart Murdoch has written since 2003. ‘Cut Your Teeth’ doesn’t offer anything particularly new, but within three minutes, Allen cements his place as one of the power pop underground’s most enduring talents. A selection of crashy rhythms and busy jangles never hide a love for classic 90s indie, thus setting up a solid framework before hitting the listener with an echoing hook that pulls 60s psych tropes into a very 90s world. Eventually, this one man band takes the music somewhere more melodic, first via a Phil Spector lift and then into a selection of chiming guitars, all underscored with the kind of ‘ooh la-la’s that’d make Steve Harley & Cockney Rebel proud. Originality may well take a back seat here, but for lovers of The Posies, or even the overlooked Trashcan Sinatras, this number’s predictable sound could be an instant hit.

Finally, ‘I’m Not Mean’ applies a similar jangle to a stripped back sound with Allen pulling out the acoustic and channelling his inner Norman Blake. The clean guitar sounds have been recorded in a way that makes them sound completely natural, whilst a reflective vocal regarding a lack of sleep, a troubling relationship and how “a little word, and understanding” can go a long way, adds to the very heartfelt musical plea. A few extra synths flesh out the music, but they’re really surplus to requirement – at least, that is, until you realise they actually help this number sound like something that could slide into a tune by The Sundays at any given moment. It’s great to hear Ryan opening up in this way, and in many respects, this track is a reminder of ‘Up Here’s most “heart on sleeve” elements. It’s most important job, though, is giving this short release more of musical balance; without it, the EP might have felt a little one-dimensional.

Some of Ryan’s influences may be fairly obvious, but the buoyancy and relative brevity of this release gives his familiar style(s) a new vigour. With no real time for boredom to set in, this is about lifting the mood, and about bringing a very nostalgic feel. This little extra from the Extra Arms man may have appeared somewhat unexpectedly in the middle of a very cold January, but it brings just enough to provide a very welcome, almost sunny distraction. For lovers of the busier, more indie-centric elements of power pop, this is a highly recommended release. On its own, it’s a handy reminder of an underground talent sharing a great gift for a hook, but when played alongside ‘What A Rip’, these ‘Four By Ryan’ definitely sound greater than the sum of their parts.

Read a review of ‘What A Rip’ here.