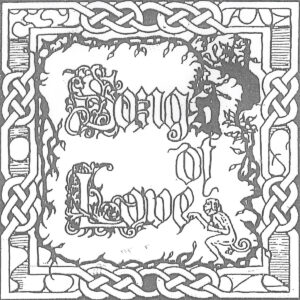 The first signings to the London imprint of the legendary Third Man label, Island of Love serve up some unashamedly retro sounds on their ‘Songs of Love’ EP. Within its four numbers, the fuzz rock duo wield distortion pedals with abandon, carve out feedback drenched solos and revisit the musical landscapes of Dinosaur Jr and Superchunk with the greatest admiration since the short-lived Yuck wowed Guardian readers back in 2011. The heart of their sound draws from some obvious key influences, but that certainly doesn’t mean they lack a musical imagination of their own. There are a few instances where the 90s fuzz collides with a stray surf twang, or even some Tommy James derived power pop from the 60s, creating something a little more varied than first impressions suggest. Any flourishes and twists are, naturally, hidden under a massive layer of noise, but it’s all there waiting for the more discerning ear to discover.

In terms of blending styles, ‘Cut Your Losses’ is arguably the short release’s finest three minutes since it whips up a chunky riff – with elements of the aforementioned slackers – which is then lent a contrasting croon, almost like something from an old Kitchens of Distinction record. The styles are so far apart that it shouldn’t work, and yet it sounds great with the dour voice lending a much darker air to the very familiar fuzz rock core. In addition, the music’s ability to drop 60s pop beats via a very loud drum into the unashamedly 90s swamp constantly hints at great sounds desperate to escape, creating a dense but strangely compelling melody throughout. In a similar mood, he title track quickly hits its stride via a mid tempo and various dirty sounding melodies that borrow heavily from Dinosaur Jr, which will instantly appeal to fans of the style. Although the main thrust of the performance is devoted to a massive and distorted riff set to serve a nostalgic treat, the performance is very much lifted by a few more interesting touches. There are some great moments where lead guitar work drops in a 60s surf twang; you’ll find an even more unexpected twin lead guitar break, and of greatest importance, bits of the understated vocal melody veer very close to The Beatles’ classic ‘Revolution’.

The short and sharp ‘At Home’ isn’t shy in pulling the listener into a world of noise that blends the slacker rock sound with Island of Love’s own punky twist, as pounding drums and noise-fuelled guitar lines battle it out across an intensive two minutes. Stopping this being a pure love letter to the 90s, the echoing vocals actively pull melodies from sixties garage bands to provide another very striking contrast. There’s so much distortion at play that the finer points of the lyric are in danger of being lost, but that really doesn’t matter; the melody itself is enough to make the heavily affected vocal soar. In terms of attention grabbing through sheer energy, this hits the mark square on with its brilliant lack of subtlety, while ‘Headcase’ opts for something even more retro. Blending a D’Arcy Wretzky-esque bassline with slightly atonal guitar work borrowed from Pavement, Island of Love really don’t hide their love for two of the true greats. but again, are able to add just enough of their own character to make the retro sounds feel fresh. It’s entirely possible to fall in love with this track through its fat bass sound alone, but various moody vocals, layers of distortion and its slow and unravelling melody each play a vital role in making it work. The vocal never rises beyond a mumble and yet appears to be pivotal in terms of steering the chorus melody to greatness, and the loudest parts of the main riff really show how this duo can absolutely nail a classic grungy sound. This will more than appeal to anyone looking for further listening after wearing out those old Heyrocco and Melted records.

On this release, there’s a beguiling ugliness that’s sometimes greater than the sum of the music’s parts, but after just one listen, it should be clear to most as to why Jack White would want Island of Love to be his flagship band for Third Man London. For the duo, an association with such a cool label is guaranteed to raise their profile, and this EP is almost guaranteed to thrill anyone still viewing grubby 90s festivals with a heavy rose tint, and/or still craves grungy, fuzz dominated riffs by the dozen. Over-familiar in its core style or not, this is a highly recommended listen.