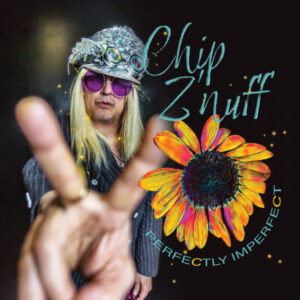 It really isn’t. There are massive chunks of this album that could be easily slot into other later EZ’N releases – its eight main self penned numbers totter between a Cheap Trick derived hard power pop sound and the fuzzed up neo-psychedelia that EZ’N have long made their staple. It’s also the kind of album that Chip could’ve trotted out in his sleep. Although that doesn’t sound particularly complimentary, it isn’t necessarily a criticism either. At the heart of the best tunes, long time fans will find an instant familiarity within the hazy vocals and multi-layered riffs, and that’s never more obvious than on the album’s first proper number ‘Welcome To The Party’. After opening with a grand ascending riff, Z’Nuff and his hired hands (which, this time, includes Whitesnake’s Joel Hoekstra on guitar) drop into a mid tempo, power pop groove that sounds like an inferior take of at least six things from the first two EZ’N records. Despite being the gold standard in “predictable wares”, there’s still a half decent melody here, and the way Hoekstra weaves a darker riff in and out of Chip’s patented fuzzy psych works quite well on occasion. The verse works brilliantly by carrying such a hugely nostalgic bent, but a little more work on the chorus would certainly have improved things. Even at his most pedestrian, Chip can do better than a one line hook, and his ragged voice present here isn’t quite up to the rousing job the track so obviously needed. Nevertheless, it just about holds its own and sets a solid mood before ‘Doctor’ lifts things further with a semi-psych workout that mixes elements of late 60s bands like The Idle Race with a big sugary chorus. Again, fans will recognise the heart of Chip’s work in an instant, and its good to hear his slightly limited vocal skills given a lift with the help of a lighter harmony and odd, almost siren-like counter melody from the guitar. Despite having one of the strongest call-backs to EZ’N’s earlier years – specifically the dense sounding ‘Tweaked’ – it’s Hoekstra’s featured solo that leaves the strongest impression. Faced with a very retro sounding slab of power pop, he appears to go for a huge contrast with a busy metal infused lead break. In the hands of a lesser player, it might have jarred. In this case, it shows invention and at least a modicum of attempting something unexpected.

Sort of a distant cousin to E’ZN’s ‘My Heroin’ from 1995, ‘Heroin’ adds a much darker vibe to this set of songs, via a slow-ish, plodding rhythm and slower vocal. There are very obvious cues from The Beatles and Cheap Trick, but the way the voice weaves into a fairly dense sound is pure Z’Nuff. Beyond the first verse, the leaden pace becomes a little too slow, but help is at hand via couple of unexpected flourishes of bluesy harmonica and guitar. It just about works, especially if you approach the track not expecting anything too uplifting. Adding to the album’s stronger arrangements, ‘Roll On’ fills a quirky chorus with a brilliant descending melody that’s almost drawn from old  popsike nuggets from ’67, whilst Chip adds a fuzzy, hazy vocal that’s actually one of his best. Again, fans will – unsurprisingly – not hear anything revelatory, but the main melody definitely has more of the buoyancy and sparkle that’s needed to make such power pop fly.

Reverting back to something that could easily be tagged “Z’Nuff By Numbers”, ‘Ordinary Man’ offers a crashy drum part set against another easily identifiable riff before sliding into an almost Beatle-esque sound. In many ways, its easy groove and bubblegum hookiness should make it a standout here, but there’s perhaps just too much reliance on the obvious, and this leads to four minute jam that sounds as if it could have been lifted straight off EZ’N’s ‘Seven’ or ‘10’ albums. It’s good, but without being in any way interesting …At least, that is, until a middle section brings forth a heavier riff and more groove-laden edge, but any desire to branch out is merely fleeting, and a final verse and chorus revert to something that’s just too keen to capture past glories. None of this is genuinely bad, of course, it’s just that at this point, you’ll have heard it all before from Chip. At least thirty seven times.

Joining the newly written material, Z’Nuff calls upon both his own past and a seminal influence to flesh out the album. Reawakening a tune from yesteryear, ‘Heaven In A Bottle’ originally appeared in demo form on an old Enuff Z’Nuff bootleg called ‘Stuck In Overdrive’. A truckload of material from the extensive demo tapes crept out officially on ‘Clowns Lounge’ in 2016 and the massive ‘Never Enuff: Rarities & Demos’ collection in 2021, but ‘Heaven’ still languished in the vault. It’s great that this old Chip ‘n’ Donnie number finally gets a proper send off, but for those who’ve been accustomed to the Donnie Vie vocal demo for so long, there’s a chance that this won’t quite match up. True enough, Z’Nuff’s slightly drawled vocals don’t muster the same confident power pop tones as the former EZ’N frontman, and true enough, Hoekstra’s guitar work just doesn’t capture the same magic as the departed Derek Frigo, but there’s still a great song to be heard here. The opening harmonic guitar part does a great job in grabbing your attention, and its instantly clear that this was written decades ago; it has a lightness that Chip has since partly lost. It might not be as good as the old demo, but at least a great chorus ensures this version holds up, and the layered vocal and occasional harmonic guitar work is strong enough to make everything work. For those familiar with Chip’s work, a descending melody during the bridge hints at EZ’N’s early brilliance, but this version could definitely have done without some of Hoekstra’s heavier edge. Any misgivings aside, it still manages to be one of ‘Perfectly Imperfect’s stronger tracks.

At the tail end of the elpee, Chip reworks the Mott The Hoople classic ‘Honaloochie Boogie’ into a fuzzy workout that sounds like an old EZ’N cast off. Naturally, Chip’s limited voice is able to convey a passable Ian Hunter, and a world of enthusiastic harmonies pull as much greatness out of the hook as they can muster. That’s enough to make it work, but not enough to overlook any of Hoekstra’s heavier guitar parts either feeling a little out of place or occasionally out of tune. There’s always the risk when taking on something so well known and well loved that it’ll be too easily open to criticism, and that’s certainly the case here. It could’ve turned out worse, of course; it’s not classic, but it’s still much better than about half of his rather misjudged Beatles covers album from 2021. That showed that it doesn’t matter how talented you are, there are always going to be some things that can’t be equalled, let alone improved upon.

There’s nothing about ‘Perfectly Imperfect’ that’s terrible. Most of the time, it isn’t even bad. It’s merely that this many years down the line, it’s all rather predictable. It’s instantly recognisable as Z’Nuff, but it would be nice to hear him thinking outside of the box once in a while, instead of repeatedly trying to recapture the sounds of EZ’N’s peak – and often with diminishing returns. Putting any misgivings aside regarding Chip’s inability to at least try something different, though, it’s safe to say that the more relaxed and forgiving Enuff Z’Nuff fan will find more than enough here for a quick and relatively enjoyable fix.