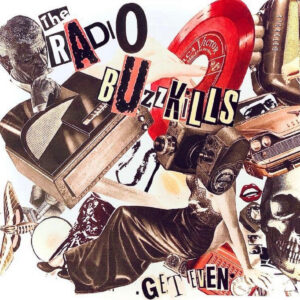 After a couple of rough but very cool demo recordings, The Radio Buzzkills crashed their way onto the punk scene in 2018 with ‘Get Fired!’, a full length debut that melded the heart of classic 90s pop punk with a tougher edge, some killer choruses and a whole world of confidence. Despite a few teething troubles during the album’s creation, it ended up being one of the year’s best releases – of any style or genre. The band later took their undying love of Screeching Weasel, Ramones and a truckload of Lookout! Records artists and created the tougher sounding – but no less great – ‘Get Lost’, which gained them further enthusiastic press.

Things were then derailed by a global pandemic. Like pretty much every other hard working band on the planet, The Buzzkills were forced to shelve their live shows – including a planned tour with horror punks The Jasons – but although they were down, they certainly weren’t out. Enforced time at home resulted in a some unplanned creativity. ‘Get Bored’, an EP featuring covers of an eclectic nature, gave fans a very welcome freebie. Few bands would be brave enough to rework tunes by Doris Troy, Jesus & Mary Chain and US punks The Guts and stick them out on the same record, but as a product of the Buzzkills own foolhardiness, here it was. What’s more, it worked. More than that, it showed how much fun the Buzzkills could have when kicking back, just being natural.

At a time when a still wobbly world was attempting to get back up and running, The Buzzkills set about writing new, original material. A huge batch of songs was eventually scaled down for a new album. 2022’s ‘Get Even’ – their first for the ProRawk label – comes with a harder and faster edge than previous works, but long time fans will instantly recognise Zac’s occasionally edgy vocal and Jenn’s brilliant counter harmonies which, as before, do a fantastic job in tempering some of the music’s rougher edges. In terms of song writing, Zac can be heard at his best, whatever scenario he chooses to share with the listener.

An instant highlight, ‘King Of Jerks’ tears forth with the kind of high octane riff that’s clearly been inspired by Screeching Weasel’s ‘Television City Dream’ LP, and although on the surface it could’ve been a throwaway bitchfest about someone from the Buzzkills’ past, this is actually inspired by a fictional scenario about love in the time of Covid and a guy who desperately wants to impress a girl who isn’t interested. Eventually, his advances make him a nuisance and the virus merely makes a tense situation worse. In some ways, none of that is particularly important. It’s the musical vessel that makes it all work, and in under two minutes, a barrage of speed driven riffs and razor edged vocal whip up some classic, timeless punk, and as with the best bits of ‘Get Lost’, to hear bassist/vocalist Jenn fleshing out an already cool noise with a sweet pop harmony really gives everything a lift. Even with some off key lead guitar along the way threatening to derail everything, this is a hard edged punky hit that’s not to be missed. Even more aggressive, ‘Movin’ Out’ could even be an old Weasel tune, as is its acidic sneer and obvious abrasiveness, and with its abrupt ending driven by a shouted gang vocal, it might be hard for some not to be reminded of SW’s ‘Cancer In My Body’. That said, it’s a superb homage, and in terms of giving drummer Bass Amp a hard and fast workout, its forty eight seconds whip up a genuinely sweaty feel whilst Zac and Gene Buzzkill layer everything with a sharp guitar sound that harkens back to other, earlier Buzzkills tunes.

For straight up punk thrills, ‘Then Came Thorazine’ tears from the speakers at full pelt, all buzzsaw guitars, throat wrenching vocals and thunderous rhythms. Although you’ve heard the band delivering similar before – and a dozen times over – a guitar solo with a cheeky edge, a flawless drum part, and Jenn countering the breakneck punkiness with some fantastic bubblegum “bap-shoo-ap” harmonies lifts everything beyond mere “by numbers” punk. Elsewhere, ‘Figure Skate Or Die’ is a carefree collision between the best retro sounds of Weasel, The Gotohells and Zoinks, with Zac absolutely relishing the moments he gets to belt his edgier vocal stylings against a trashy melody, the slower ‘Please Don’t Go’ showcases a superb rhythmic chug from guitarist Gene Buzzkill as he works through a selection of muted chords whilst Zac recounts a tale of woe where the protagonist’s pleas are tunelessly heartfelt, and ‘Mad Mike’ taps into the brilliantly puerile humour of classic Fat Wreck/Lookout punk, telling the tale of a Flat Earther who builds a rocket in the back yard and does himself untold damage before eventually killing himself in a freak accident. With a great, sneering narrative set against the kind of riffs that the earliest Ataris albums took to glory, this is an instant classic.

The more melodic ‘I Fell For You’ features a great lead vocal from Jenn, and it’s a real thrill to hear the Buzzkills immersed in something that harks back to the bubblegum inflected power pop sounds of 1981. Although a few overdriven guitars do their best to keep the punk end up, this is a number that very much relies on huge harmonies and a pop-ish heart – more Holly & The Italians than Mr. T Experience. It’s at odds with the rest of the album in so many ways, and yet it really works. In adding a little variety it proves that the Buzzkills have a mature side and are dab hands with strong hooks. Another number with Jenn out front, ‘Jennifer Gray’ is an ode to wanting to dance, set to a classic Ramonescore riff. Multi-layered vocals take on various melodies that could’ve been inspired by Dan Vapid & The Cheats; grubby guitar lines chug away at speed, pulling all the great influences from a Lookout! Records past, and eventually, a call and response counter vocal fills a big climax, elevating an already great track to the status of “instant classic”. Whether you’re already familiar with The Radio Buzzkills or not, this is easily one of the finest pop-punk workouts you’ll hear for some time.

Although largely working to a familiar Buzzkills formula, ‘I Want My Records Back’ provides another punky banger, where Weasel/Vapid inspired riffs underscore a simple tale of breaking up and having your ex wander off with your favourite vinyl selection. It’s all tackled very much in classic Buzzkills style with the band adapting the rhythm with a slightly thrashier style than before, but the heart of the performance is very clearly the same band who invited you to ‘Get Lost’ back in a pre-pandemic age. In terms of lead guitar, Gene’s in great shape once again, meaning that even though this could easily slip into generic punk, the levels of energy and self-belief give everything a brilliantly spirited feel, and in a similar mood, ‘Caravan of Garbage’ throws out riff after riff of (yet more) Weasel obsessiveness, but adds an extra twist via some fantastic heavy tom work from Mr. Amp, and another terrific counter vocal from Jenn. ‘Nothing New’, meanwhile, is really nothing new, but with the band having settled into a stylistic mood and having smoothed out a couple of the rougher edges of their earlier work, it’s possible to believe that they have now pretty much perfected their sound. Although it works largely as a homage to the 90s bands, it still sounds sparky, proving that the Buzzkills have found a sound that would work for them until they’re are ready to record ‘Get Old’ in the basement of their St. Louis retirement home. Simply put, if you’ve spent hoovering up releases by Screeching Weasel, The Copyrights, The Lawrence Arms and Teenage Bottlerocket, you’ll love this – guaranteed!

On first listen, ‘Get Even’ mightn’t seem as coherent as ‘Get Fired!’, but it’s strengths are more immediate than ‘Get Lost’. With Jenn taking a couple of leads, and the band being unafraid to pull between pure grit and pop melodies, this is certainly the most varied Buzzkills record to date. With fourteen pop punk tales loaded with sharp wit and cool melodies, there’s a lot here for fans of the style to explore, and everything sounds better with each successive spin. After being allowed time during various lockdowns to take stock and build upon their style and repertoire, this is where all the pieces of the band’s past truly come together. As a result, ‘Get Even’ is a record that captures the Buzzkills at peak confidence.