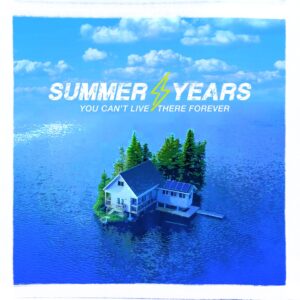 San Diego’s Summer Years first appeared on the collective radar of pop punk fans in the summer of 2021 when the video for their debut single ‘This Light’ premiered on YouTube. In barely three minutes, that track – and its accompanying visuals – presented the young band, not only as great players, but also one keen to share an important message.

Regarding that song’s key lyric, frontman Nick Lanari explained how “life has a way of pushing you away and turning you upside down” and although his observation might’ve seem like a bleak warning, the song was anything but downbeat. In fact, it was – and remains – more of a paean to pushing through; an anthem for being the best you can be. Its main refrain even offered a few words of advice well worth taking to heart: “be yourself and you’ll get through.” With thoughtful lyrics pitched against some great music, shifting from melodic pop punk chops drawing from the lighter end of early Sum 41 and the more emo-centric elements of Jimmy Eat World, but also finding time for a slightly heavier breakdown, ‘This Light’ certainly had all the makings of a buoyant summer anthem for the alternative set.

As part of Summer Years’ debut EP ‘You Can’t Live There Forever’ – released much later, in January ’22 – it holds up very well, but isn’t actually the best number within the band’s growing catalogue. That honour would go to opening track (and second digital single) ‘The Picture You Paint’, which wastes no time in re-awakening nostalgic feelings of the pop punk sounds of 1999. Opening with a speed driven, ringing guitar part, it immediately presents an energetic core and as the first verse powers through, echoes of greats like Yellowcard and Jimmy Eat World inform the overall sound. Lanari’s slightly deeper vocal gives the band a more distinctive feel, though, and lyrics about dealing with depression (“I’ve been wandering like a ghost no-one knows”; “help me off this jailed wall, built so high”) once again set out the band as more cerebral than some of their peers. As with ‘This Light’, the darker elements are counterbalanced by a ray of light with the protagonist “heading towards [an] oasis” and realising all the demons were let in by oneself, so this immediately becomes a classic Summer Years track. For those purely interested in the number’s musical merits, an absolutely huge chorus challenges bands like A Day To Remember and blessthefall in terms of hooks, and a further similarity with ‘This Light’ brings a brilliant, darker section where the riffs subside and a bass rises ominously, offering an atmospheric bridge into a final chorus which, due to the shift in mood, sounds bigger than before. Factor in a couple of moments where the standard pop punk riffing appears to drop into a jerkier and more arty riff, and this feels like a very complete three minutes.

Introducing a dirtier guitar sound and a truckload of speed, ‘Blue Skies’ owes far more to classic recordings by Strike Anywhere. Drummer Isaac Park leads the charge with an absolutely thundering rhythm throughout the verses, and everything hovers between noisy pop punk and melodic hardcore in a very natural way. The introduction of the vocal allows everything to settle into more of a melodic groove, but it’s the chorus – dominated by a rising melody and a voice determined to make the message feel anthemic – that wins out. Here, the poppier edge feels like a cross between other Summer Years fare and Rise Against but, again, it’s a blend of styles that this band pulls off with a genuine ease. By the time everything works its way through the expected chunkier breakdown and an unexpected semi-acoustic interlude, there’s definitely a “kitchen sink” quality to the arrangement, but nothing feels unnatural or forced.

Opting for something more predictable, ‘What You’re Made Of’ opens with a quiet echoing riff, like a guitar has been played down a telephone, before dropping into “pop punk 101”, often sounding like a blink-182 deep cut from 2001. A more generic feel doesn’t ever mean it’s inferior, of course. Between a dual vocal, an incredibly buoyant riff and a few flawless harmonies – especially during a breakdown with a rising melody – Summer Years, once again, prove to be new masters of their chosen genre, taking a retro sound and making it feel vital again, before ‘Letting Go’ and ‘Small World’ round out everything with a superb collection of riffs. ‘Letting Go’ wastes no time in creating an impression with a huge barrage of lolloping hard rock riffs, introducing a blend of melodic alt-rock/pop punk with an almost waltzing time-sig. The band take the slower, chunkier groove and work it to their advantage, first by pushing Mike Liorti’s bass much further forward in the mix, before lead guitarist Noah Rabe and Mike Lanari indulge in some rather chunky riffery. This is a number where first impressions suggest that the riff is everything, but the lyric is just as important. In this case, its message of “going all in” when it comes to “pursuing the things you believe” has the usual Summer Years optimism, and is pretty much universal. Musically speaking, it’s certainly a much more of a slow burner if you’re approaching this EP expecting wall to wall, straight up pop punk, but a few plays really allows its more mature qualities to shine through. Last up, ‘Small World’ aims to be more reflective with acoustic guitars and string sounds diving into the worlds of alternative singer-songwriters and emo bands alike. Lyrics musing upon a burgeoning relationship and “laying under night skies” paint such a vivid picture that the music sometimes seems secondary, but there’s plenty of melodic beauty within the indie/emo crossover sounds. By the time Isaac drives the final chorus to glory with a harder edge and deft counter vocal, there’s a feeling that, if they so wished, Summer Years could branch out into more of an emo sound on future releases without losing the core of their audience, and without missing a beat. At the time of release, it isn’t exactly typical of the bulk of their work, but it closes their debut with something that’s both sophisticated and suitably reflective – the work of a supremely confident musical unit.

This EP might seem to have taken forever to arrive after the debut single, but it was worth the wait. In just a half dozen songs, Summer Years make a strong claim for being one of the best pop punk bands to emerge since As The Sun Sleeps released their debut in 2017. It’s got a whole world of classic riffs that avoid sounding too generic thanks to some great arrangement skills, thoughtful lyrics and – above all – enough massive hooks to see everything rise to glory, even for those who care not for anything challenging or introspective. This is a small but near perfect package; retro yet contemporary, chunky, but always melodic – pop punk the way it should be. Highly recommended.