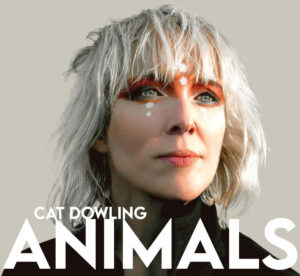 ‘All I Can Do’ – released as a digital single in February 2022 – is a particular highlight. Its three minutes waste no time in setting up a great rhythm where the drums settle into an unobtrusive shuffle allowing the bass to drive a great melody forward, as if borrowing from a couple of old soul and funk bangers. Despite a semi-busy arrangement, there’s plenty of room for Dowling to deliver a great vocal, and fans of old will certainly be quick to latch onto her hazy, Beth Gibbons-ish presence. Her high trill offers a brilliant contrast to some of the music’s deeper sounds, and as the track progresses, Cat and her band gradually build a world of tight pop that’s anything but trashy. A layered harmony fills space effortlessly behind the lead vocal, and occasional shimmering guitar sounds more than add a pleasingly retro touch. It’s all good, but the real magic comes from a harder edged climax where Cat hammers home an almost spoken vocal against a dance-able groove before the simple refrain “all I can do is bring you my love” leaves the listener with an earworm in the truest sense. The title cut has a similarly busy quality, and yet musically, its reliance upon more acoustic elements and chamber pop strings ensure a completely different experience for the listener. Cat’s vocals maunder their way through the narrative as if channelling Billie Eilish in a few places, but her breathy tones remain as distinctive as before, making for kind of performance that elevates itself way beyond the semi-acoustic pop roots. It may well take a couple of listens before its pieces all fit, but there’s plenty here to keep you listening until that moment arrives. With a gradual rise from understated folk-pop into a full blown Florence Welch climax, this is especially smart.

Opting for something rockier, ‘Trouble’ wields a reverbed guitar set against a fat bass groove, resulting in a melody and sound that isn’t too far removed from the best ‘AM’ era material from Arctic Monkeys. It’s by no means a direct copy, of course, and Dowling’s sultry vocal and honest lyric take centre stage with the same kind of confidence as before. The bulk of the tune adopts a heavy strutting quality often dominated by that reverbed guitar – something that wouldn’t need to change from the outset and the track would still work – but a weird noisy interlude lends a great twist, and a couple of sparser moments that allow the bass to punch through even harder bringing a great live feel to the performance. It’s great to hear Cat helming a very retro sound, and the accompanying band should feel justifiably proud of their work here, and the same applies to ‘Bullets’ which, in yet another stylistic change, presents a brilliant bluesy guitar. The speedy finger picked riff delivers an absolutely fantastic circular groove throughout, over which off-kilter beats influenced from old post-punk discs dance with abandon. The uneasy marriage between a quasi-funk rhythm and rootsy melody is genuinely exciting, and by the time Cat drops into the kind of vocals that evoke the kind of power you’d expect from Florence + The Machine once more, this workout takes pride of place as another stand-out track. …But that’s not all: at the point you’d expect it to have no more to give, the groove intensifies; the rattling drums get heavier, Cat weaves a superb vocal in and out of clattering beats and an even more obtrusive bass, before everything falls away to tease with various a cappella voices delivering the main lyric in a way that’s instantly effective.

Even though the harder edged tunes are great, in many ways, the stripped back ‘I Never Knew’ gives a much better platform for Dowling’s very natural voice. When not battling against a busy backdrop, there’s much within her semi-mumbled delivery that echoes ‘Sugaring Season’ era Beth Orton, but when in full flight against the keys and a quiet string based drone, her heartfelt performance has a definite character of its own. It takes less than thirty seconds for this haunting melody to grab the listener, but it’s an unexpected coda where the piano melody is complimented by a chorale set beneath filtered effects that leaves the most indelible impression. This lasts for just a few bars, and yet its uneasy melody feels all emcompassing, like Dowling has awakened the ghosts of an old Judee Sill or Laura Nyro recording, dredging their haunted spirits into the present and set them free. If the album has a pivotal track, then this is certainly it: a short showcase for the singer-songwriter laid bare, unafraid to spill her innermost thoughts with an audience that – at this point in the journey – will likely follow wherever she chooses to lead.

Throwing most of Cat’s moods and influences into an eclectic piece, ‘Is This Love’ opens with a world of acoustic guitars and handclaps – like a estranged cousin of Fleet Foxes and The Lumineers – but changes tack to introduce a few dreampop drones, before settling into something anchored by funk bass. On first listen, it’s very much the kind of thing that could be compared to tracks from Beth Orton’s seminal ‘Trailer Park’, but allowing time to uncover its many flourishes, it’s even more complex. There’s a lot that relies on the strength of the bass, but the smoky, almost jazzy edge to some of the vocals gives the tune so much character, and at the tail end of this fine elpee, there’s an even deeper delve into the world of jazz when ‘Let Love Be’ pays homage to old easy listening fare. With nothing to hide behind, the vocal is almost everything, and there’s a genuine beauty in its natural tone. It might not always have much in common with the core of ‘Animals’, but like so many of the other tracks, it shows an artist who’s willing to experiment; a performer who will neither be easily pigeonholed or rest on past glories.

Despite drawing from a few clear influences, Dowling’s art is very much its own thing where glimmers of an Alphastates past twist themselves very confidently into brand new shapes, eventually melding into very different aspects of pop, indie and rock, and ending up somewhere unexpected. If, for some reason, the songs don’t quite click on first listen, try again…and repeat as often as necessary; eventually, those listening rewards will pay off hugely. A fearless spirit gives ‘Animals’ a brilliantly quirky heart, and some finely honed songs that, even in a world where music has become too much of a push button, disposable commodity, certainly won’t burn themselves out too quickly.