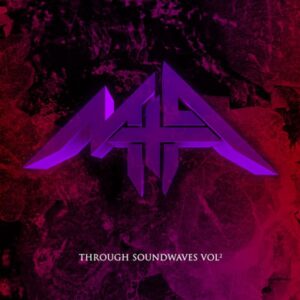 ‘…Vol. 2’ shows off more of Gagliardi’s broad influences, as well as a conveying a sense of fun. A take on the classic ‘Buffy The Vampire Slayer’ theme demonstrates a genuinely punchy sound, and despite sticking rigidly to the original arrangement, this recording in some of the sharp edges for a genuine heaviness. It works. It’s never groundbreaking, but it’s an enjoyable twist on something very familiar. In taking the synth-goth of Killing Joke’s ‘Love Like Blood’ and applying the heaviness of the Stone Sour debut and ‘Bloody Kisses’ era Type O Negative, Martyr Art delivers a fantastic cover of a classic track that seems especially fresh. Its mid paced arrangement is just perfect for this kind of heavying up, while the contrast between a filtered croon and melodic hardcore growls lends an extra depth.

Perhaps due to Martyr Art’s work already having very strong industrial roots, a medley of Nine Inch Nails tracks doesn’t work quite as well. Simply increasing the heaviness of ‘Gave Up’ and underscoring it with an ominous two note dark electronic sound just doesn’t feel like a job well done, even though the most intense parts of the recording tap into a sound that brings the material a little closer to Ministry’s ‘Filth Pig’. A coda featuring a section of ‘The Perfect Drug’, meanwhile, feels somewhat like an afterthought. It’s never bad – far from it – but you’ll certainly find more exciting work elsewhere on this EP.

Martyr Art isn’t just about putting his own stamp on classic metal, industrial and goth, either, as demonstrated by a rendition of synthy pop band The Weeknd’s ‘Blinding Lights’. Now a heavy, mid-tempo stomper, this cover manages to straddle melody and crunch at almost every turn. A cracked and deep vocal will certainly call to mind Type O Negative and mid 90s era Laibach, while a lighter alt-metal style contrasts the sheer darkness with a flair that recalls early Linkin Park. You’ll never hear the original recording in the same way again…and this could definitely be a good thing.

A pair of self written tunes round out the release, and both are great. Although ‘The Chosen One’ is only really an intro, the use of retro synths calls to mind the Tangerine Dream soundtracks to a couple of 80s horror films, while the quiet and ominous ‘The Current Subsides’ shows off the contrasting quiet/loud/quiet aspects of Gagliardi’s arrangements better than ever. At the outset, it crawls along with a relative minimalism with faint echoes of Fields of The Nephilim informing a dark vocal, before the track blossoms into a world of slow, chunky metal riffs showing off a great guitar tone. In keeping with so many of his influences, Gagliardi uses the studio to its full advantage, and by the time this number settles on a doom metal riff complimented by a dark crooning vocal, chances are you’ll consider it among your favourite goth metal tunes.

Stylistically, this never breaks the mould, but by mixing the heavy influences with the 80s goth, and by contrasting some intense riffs with a couple of fun covers, this EP always seems to value sheer entertainment over grandiosity or self-importance. For fans of gothic metal or goth-inflected industrial sounds everywhere, this is definitely a recommended listen.