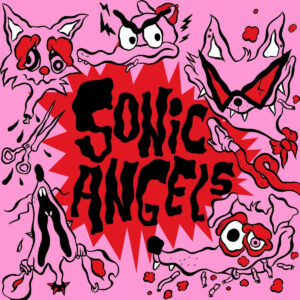 Garage punks Sonic Angels are billed as promising “high octane, lo-fi fun” on their self titled release from ’21. Those already familiar with the band will more than know what to expect from their music, but the fact that the band continue to plough a familiar, loud and fast furrow is actually something to celebrate. After all, when you do something so well, why mess with a winning formula?

In what sounds like a direct continuation from their 2020 release ‘Nice Time’, ‘Love Is The Law’ crashes forth with a set of punk infused 60s influenced chords. Within seconds, the band set themselves up as the crashiest hybrid of early Who, The Action, The Sonics and The Stooges to emerge from European shores. The riff is good enough to stand alone, but joined by a raw and echoing vocal, this musical throwback has all the greatness of the garage punk scene’s forefathers, and by the time a sloppy yet sharp-edged guitar solo fills the air, this becomes an instantly great addition to the band’s growing legacy. It’s always far more about the riffs than any vocal hooks, but with the volume cranked, it works brilliantly. Adopting far more of a US garage rock stance, ‘Fairlopa’ delivers enormous grooves that could easily be a long lost Stooges recording. The way the chords sound tough and meaty, yet at the same time appear to be so fuzzy they could be drowned out by their own distortion is classic Sonic Angels, and the repetitive hook set against howling lead guitars instantly sets a shout along hook in motion. Yes, the recording is still raw, but in terms of serving an authentically retro sound, it doesn’t get much better than this.

‘On The Radio’ recycles a riff that sounds like ‘Clash City Rockers’ played with genuine gusto and places that against another Stooges-esque blast. During the verse, Sonic Angels work some brilliant pogo-worthy chops, but its the blustering chorus that wins out when guitarist/vocalist Marc Hacquet steers everything through an unrelentingly distorted sound augmented by crashy drums. Granted, there’s nothing here that is new for the style – and it certainly doesn’t push Sonic Angels forward in any way; it’s just good, honest, lo-fi noise that’s unashamedly celebratory. Guaranteed to be an instant hit with lovers of the Sonic Angels sound at its most uncompromising, the title track shifts into far more of a punk mood. A classic Ramones influence comes through during the opening barrage of riffs, but then moves towards a staccato rhythm that provides enough space for an ascending riff to take pride of place. Atop the glorious noise, a careening and almost brattish vocal provides a very effective compliment. In a little over a minute and a half, the band works up an absolute frenzy, and with bassist Syvie’s interjected vocals making an unexpected appearance, the sharp gets sharper, eventually marking a place among 2021’s greatest punk oriented performances.

In and out in approximately eight minutes, this EP leaves the listener very little time for reflection or too much over analysis. It really is all about the riffs and the energy, and on that front, Sonic Angels score very highly indeed. If you’re already familiar with the band, you know you want this. If Sonic Angels are new to you, it’s likely you’ll want this too – it’s a genuine DIY thrill.