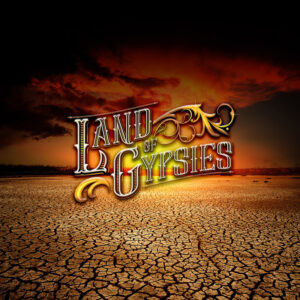 Understated is not a word you could ever use to describe his vocal presence on this debut from Land of Gypsies. Sure, the top end scream from the XYZ days appears to take a back seat, but throughout the eleven cuts, Ilous runs a decent range between melodic cries and bluesy wails, in an obvious extension to his previous work with Great White. In former Glenn Hughes collaborator Fab Grossi – handling bass and production duties – he has a musical partner able to compliment his still impressive voice effortlessly, and although lesser known, guitarist Serge Simic often displays a talent that’s equally sympathetic to Terry’s performance needs. For most people Ilous will be the big draw here, but there’s no questioning Land of Gypsies’ credentials as a “proper band”.

One of the album’s most melodic tunes, ‘Long Hot Summer Day’ mixes AOR hooks with a vaguely roots rock sound. The instant impression it gives is that someone has been listening to Joey Tempest’s vastly underrated ‘A Place To Call Home’ album from the 90s. There’s plenty here to link it with Terry’s own work, too; a massive vocal curl is reminiscent of his time with Great White, and he sounds really at ease with this new outfit. This band of Gypsies isn’t just the Terry Ilous show, of course, and on this particular track, Simic offers some great guitar sounds: whether working with a clean rhythm or dropping in with a big, sweeping solo, he appears to take everything equally in his stride. ‘Somewhere Down The Line’ gives the impression of a decent rock stomper at first – and, indeed, parts of the arrangement feature some classic blues rock fills from Simic against a solid drum – but as with so much of the Gypsies’ material, those bluesy elements are offset by a fine and retro melodic rock core. There are a few moments during this particular track where it sounds as if they’re channelling Sweden’s Snakes In Paradise; others, reawakening a touch of Great White. In the main, though, the arrangement boasts a massive melodic rock hook which, underscored by Hammond organ sounds, results in something that feels instantly familiar. It’s safe to say that fans of old fashioned sounding rock will take to this in a heartbeat.

In a busier mood, ‘Ordinary Man’ blends retro organ sounds with a funk-edged riff. Musically, it could be a thousand and one hard rock bands, but the vocals are unmistakable. On this track, Ilous pulls out a great blues rock croon, but more importantly for the old fans, there are moments where the XYZ wail is more than evident. It’s more tempered than before, but it’s big and clear. Hearing him curl that around music that harks back to the Mark Mangold Flesh & Blood project is enough to make this a highlight, but Simic’s more aggressive presence is equally cool, as he drops in a melodic metal solo where it’s least expected. The sharper edged tones could – and perhaps should – have derailed everything, but there’s something about the angrier instrumental break that suggests Land of Gypsies have a huge amount of confidence in their combined talents, and in this case, that all round ballsiness really pays off.

An instant standout, the softer edged ‘Run Away’ places Terry’s more soulful voice against a clean guitar, serving up the kind of sounds that, although AOR influenced during a harmonious chorus, would have really suited Paul Rodgers in the 90s. Lyrics regarding being saved from oneself might seem well worn, but the vocal’s general ache and a little of the old Ilous trademark scream rising before a great guitar solo really give the track a lift when needed. Working a massive, descending riff, the intro and bridging riffs during ‘Shattered’ sound a lot like something Fab would have played during his days with Glenn Hughes, but in true Gypsies style, these heavier moments are tempered by a very soulful verse which, combined, results in another fine retro rocker. Again, Ilous shows no difficulty in reaching for those trickier high notes, and a bigger concession to an all-round groove gives drummer Tony Morra far more to work with than usual. Of particular note here is the way he steers the band through a moody mid-section with a solid tom and the ease in which he moves from those darker edged rhythms and back into a full blown rock sound. He’s a great backbone for the band as, unlike so many rock drummers, he doesn’t expect the audience to focus on him at all times; he’s just there, steadily keeping a beat, giving most of these songs exactly what’s needed – never more, never less.

The hard rockin’ bluster of ‘Trouble’ sounds like a cross between XYZ, Great White and a band very keen on reworking the sounds of a Zeppelin-esque stomp via an early Whitesnake prism. Bread and butter stuff for Ilous at every turn it may well be, but across the four minutes he offers a near perfect blues rock vocal, rivalling Matti Alfonzetti, and a few brief snatches of lead guitar show how easily Simic compliments a great vocal with some vibrato fuelled fills. The equally strong ‘Rescue Me’ quietens things down with a sparse semi-acoustic arrangement that moves the band even further towards the realms of early Whitesnake, before bursting into life with a full bodied blues rock riff and busy bass accompaniment. It would be easy to sneer and suggest this isn’t much different from about three dozen Scandinavian bands over the past few years, but there’s plenty in this musical union that makes the well worn sound impressive on its own merits, and set closer ‘Get It Right’ offers a full compliment of chugging riffs and crying tones, more than making good on the earlier hints of all things harder edged. A definite throw back to the Great White ‘Elevated’ LP, Ilous sounds forceful throughout without using any real force, whilst a groove laden band throw themselves into a Zeppelin/XYZ hybrid in the manner of seasoned pros. There’s no real filler to be found on this album, but in closing with one of their biggest and best tunes, Land of Gypsies definitely leave their audience on a high.

It almost doesn’t matter where you drop in on this album, you’re almost guaranteed to find a great riff and an even better vocal. The members of the band work so well together, you’d not know they’d only been together for a year prior to recording. Ilous sounded strong on his sole release with Great White, but he hasn’t seemed this at ease since XYZ’s ‘Hungry’ back in 1991. Grossi’s crunchy style definitely helps him reach for his best performances too, and Simic’s melodic yet equally huge guitar tones make a very old fashioned rock sound bristle with life. Simply put, this is a great debut from the Gypsies – fans of very retro but huge sounding rock should check it out without delay.