As November breathes its last, the changing weather has been a keen reminder that we’re moving from autumn into winter. Parts of Britain are being battered by strong winds; other parts are experiencing snow. Luckily, the Kent coast seems to have escaped the white stuff – for now – but it’s cold. Very cold. Outside the Music Hall in Ramsgate, it feels like the arctic, and those venturing out could feel like Captain Oates. To be fair, everyone has been – and will be – subjected to far colder, but a year’s worth of not going out much due to the global pandemic has made it seem particularly harsh. It’s worth braving the cold tonight, though, as Detroit’s Electric Six are in town as part of a last minute addition to their UK tour.

The venue itself is tiny, but brilliant. It has previously staged gigs by the legendary (Jarvis Cocker), the cult (Shonen Knife, Robyn Hitchcock, Gong) and the should’ve been huge (Kolars), but it’s one of those venues where every gig has the potential to be special. There’s no reason to suspect a high energy set from Dick Valentine and this year’s line-up of Electric Six will be any different. As the band make their entrance through the venue’s trap door, the room is packed to the rafters and there’s a real buzz in the air as, for some, this marks a return to gig going after a long time away.

It’s nothing short of a miracle that the compact stage manages to host six musicians – a couple of whom take up a reasonable amount of space – but they’re there, and with no further fanfare, Electric Six break into a storming rendition of ‘Mr. Woman’. Valentine is in full sneer; his right hand man The White Wolf – dressed in a sharp white suit whilst looking like John Lithgow with a comb-over – dominates everything with a heavy twang…and it’s loud. By halfway through this first number, which already has pockets of the audience moving, it’s clear that this could actually be the loudest gig at Music Hall for some time. Breaking only to announce “song two” and “song three” from the setlist, Valentine leads the charge through equally sharp takes of ‘Bride of The Devil’ and ‘Rock N Roll Evacuation’; the band by now in even better shape, with a sweaty Doctor J dropping much harder beats and a gold jacketed Da Vé on stage right (audience left) really fleshing out a great sound.

Predictably, it’s the ‘Fire’ material that gets the biggest response from most of the crowd, and ‘Naked Pictures’ sounds brilliant – perhaps better than during the band’s “peak” years. The riffs are tight throughout, and Valentine’s distinctive voice seems almost theatrical when in full flight. Further exploration of an eighteen album catalogue brings ‘Down At McDonaldz’ and some full scale disco beats, before a technical issue means that a more downbeat number is dropped in whilst The Wolf disappears to change guitar strings. Upon his return, the double whammy of the over familiar ‘Gay Bar’ and its funk inflected cousin ‘Gay Bar Two’ show off two different elements of the riff based Electric Six sound. As before, the tunes take precedence over any time wasting stage banter, but Dick’s quip about songs being written when “we thought George W. Bush was the worst thing that would happen” and a tale of being heckled as an uncool band at a petrol station in Sandwich very much reminds everyone that this set is absolutely loaded with a knowing humour. …And in terms of being cool/uncool, Electric Six are kings.

The second half of a marathon twenty song set ups the ante even further. ‘She’s White’ and ‘Slices of You’ are positively explosive, with the latter causing a blonde woman in the front row – already seemingly having the best night ever – to burst into song whilst dancing furiously. If she’s about to peak, then a trilogy of ‘Fire’ classics will surely finish her off prematurely. ‘Improper Dancing’ comes fully loaded with disco cheese colliding with some furious bass work from Rob Lower; the hit ‘Danger! High Voltage!’ shows how it’s retained all of its groove-laden chops over almost two decades, and although the moodier ‘Synthesizer’ initially appears to be the evening’s only mis-step, it’s quickly obvious that its main objective to stop audience members over exerting themselves.

At the tail end of the night, another selection of high octane bangers throws the front of the audience into a frenzy. ‘Dance Epidemic’ prompts a bandana wearing man to lurch about like no-one’s watching; an older man gives ‘I Buy The Drugs’ a full on pogo, and the closing ‘Dirty Ball’ and ‘Dance Commander’ really raise the roof. At this late stage, the whole crowd is really up for it, but still not as much as the band. During ‘Dirty Ball’ especially, the guitar interplay is sharp, but the punchy bass comes through much sharper, and Valentine, still retaining all of the vocal chops from the start of the set has far more of a presence and affecting tone than his studio counterpart. If it seemed odd to the casual observer that this band has continued to release material year on year, despite being unnoticed by most, this is proof enough that they’ve still got so much to give. This live show has been absolutely incendiary.

When Electric Six played the Reading Festival in 2003, just after their big breakthrough, most of the massive audience wanted to hear ‘Gay Bar’…and only ‘Gay Bar’. The band aren’t faced with that problem this evening. The only bit of audible heckling comes from a woman keen to hear ‘Don’t Change’, the lead track from Electric Six’s current album ‘Streets of Gold’ (from which, bizarrely, nothing is played). The venue might be small, but everyone there – whether a long-time fan, continuing to follow Electric Six through those lesser known albums like ‘Zodiac’ (2010) and ‘Mustang’ (2013), or a casual observer keen to witness the band’s live show in close proximity – has hung from every word and almost every riff. …And it’s been bloody fantastic. In terms of the Music Hall’s history, this has been such an important event, too. Not only will it look great in the history books, but this sold out night has surely proven that during an ongoing pandemic – and against some pretty huge odds – the grass roots venue still has a future. 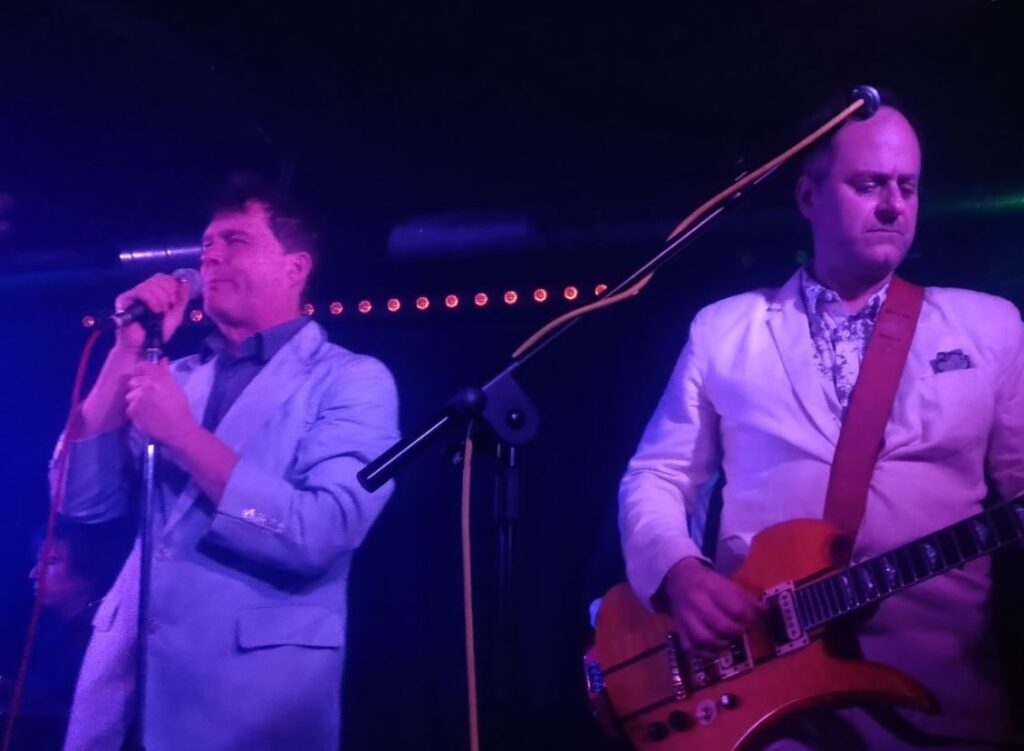 Read a review of Electric Six’s ‘Streets of Gold’ here.
Check out our other gig reviews from Ramsgate Music Hall here.