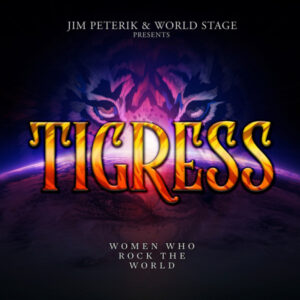 As suggested by the name, those fans don’t always get their wish with World Stage. At their worst, the World’s Stage recordings can sometimes make Pride of Lions seem teeny and non-committal. This fourth album isn’t quite as theatrical as a couple of their older works, but a chunk of it still has a hugeness and a self-important pomposity that might make those who hanker after tunes like ‘Poor Man’s Son’ and ‘American Heartbeat’ break out in a cold sweat and run for the hills. There are some great tunes to be found on ‘Tigress’, but those are weighed down by its three or four slices of cut price theatre for the aging, melodic rock masses, and Peterik’s once unquestionable talent seems all the poorer for it. That said, the album certainly leans further towards a favourable AOR/melodic rock direction than its predecessor (2019’s ‘Winds of Change’), but on an overlong sixteen track album, seven or eight good tracks doesn’t quite seem to be enough, quality-wise.

The lead single ‘A Cappella’ presents one of‘ Tigress’s best offerings. It opens with some massive theatrics, but quickly offers a decent contrast via chopping guitar riffs on the second verse, over which British melodic rock star Chez Kane unleashes her inner Pat Benatar. As with the best bits of Kane’s excellent debut album from earlier in ’21, her voice is full and rich and you really get the sense that she could handle anything put her way with ease. The assembled band actually come across as equally natural, and even when shifting between the chopping guitar riffs into a bigger chorus, everything seems perfectly set up for the older AOR fan. Likewise, ‘Music In The Aire’ shows off a barrage of great harmonies and a great rhythm that calls back to some of the best 80s melodic rock (without ever sounding like a carbon copy of Survivor). There are a couple of hints of Meat Loaf, but more so some of the bigger sounds of Holly Woods & Toronto, which gives a great musical base for a fantastic guest lead guitar from Joel Hoekstra and a first rate vocal from Trans Siberian Orchestra collaborator Chloe “Just Chloe” Lowery. In melodic rock terms, this pushes so many of the right buttons that it actually becomes all the more frustrating when Peterik doesn’t reach for such a classic style more often.

Also enjoyable, ‘Dear Life’ has a thundering AOR rhythm lurking beneath clean guitars which call back to Jim’s Survivor days, whilst guest singer Lindsay Kent croons with a very late 80s twang. In terms of retro melodic rock, it’s fine and Kent has a pleasant enough voice, but compared to the genre’s glory years, it’s hampered by a compressed production and rhythm section that never really punches in the way it should. On the plus side, Peterik’s guitar solo is immense – big and sharp enough to upstage the featured vocalist in just a couple of bars which, given this project’s basic remit, probably wasn’t the intention. ‘Living For The Moment’ also fits the AOR bracket quite nicely, by first introducing a full compliment of inventive lead guitar sounds set against a vaguely proggy backdrop. In keeping with the bulk of the World’s Stage material, it all gets a little bigger once Jefferson Starship’s Cathy Richardson starts to sing, but there’s a delicate balance between pomp and melody that suits her sizable voice. Rather than going for obvious Grace Slick-isms here, she settles into a confident style that has a vague hint of Darby Mills, which proves to be a smart choice once the chorus takes shape, fusing a harmony driven style with a very melodic guitar part. Those who still love all manner of 80s melodic rock will definitely find something to enjoy here.

In a musical sidestep, ‘Prom Night In Pontiac’ mixes decent melodic rock chops with a slight country vibe, creating something fairly frivolous, but also quite cheesy. A harmonious chorus stokes up the fun and another appearance from Chloe Lowery cements her place as one of this album’s most valuable performers. Across four minutes, there’s far more of a carefree feel than most of World’s Stage’s output normally allows, with a shamelessly sing-along hook taking pride of place, whilst the slightly bluesy ‘Stronger At The Broken Pieces’ largely succeeds through a decent vocal from Uncle Kracker’s Marine Lacoste as opposed to any of the music. It’s a solid track on its own merits, but if measured directly against one of its closest equivalents – like something from Susan Tedeschi – it comes across as a little stodgy. Another AOR banger, ‘Taller’ just about scrapes a position among the album’s better numbers thanks to a great melody that blends Peterik’s 80s AOR past with the heart-wrenching hugeness of World’s Stage’s more palatable moments. It’s a little frustrating, though, as the tune has a very strong core, but nothing substantial to back it up. Along with Chez Kane, Leslie Hunt’s vocal is one of the album’s most striking in a melodic rock sense, and the featured guitar solo is lovely, but the song itself seems empty and repetitive. The lyrical concerns of inner strength are well meaning but trite, and by the time Hunt insists “we are taller” for what feels like the billionth time, it becomes one of those songs that seems utterly disposable. Still, in terms of Peterik reaching into his past for some strong melodic rock sounds and some very strong musicianship, it’s still got something in its favour.

…And that brings us to the album’s more problematic elements. The title cut – used to open the album – is particularly nasty. Kate French came to most peoples’ attention as the vocalist with Chastain, showing off some obvious metallic grit. On this recording, she takes a more melodic role, but faced with a huge and lilting melody that sounds as if it’s culled from a cut price musical, her constant wavering between growls and huge wails actually sound very uneasy. Coupled with musical flourishes that dare to drop in clichéd jungle drums and some overwrought soaring guitar, it’s all a bit embarrassing. Potentially far worse, ‘Lazarus Heart’ is a really bad ballad that makes Vixen’s Janet Gardiner sound almost uncognisable as she over enunciates every syllable, curling her sounds really uncomfortably in the manner of an old woman struggling with new false teeth. It reinforces Peterik’s stage aspirations in the worst possible way; it is neither melodic or rocky enough to appeal to your average melodic rock bod, yet never quite natural enough to slot in with a small off Broadway musical. It just lumbers through four minutes with a misguided sense of importance, making the listener feel as if the likes of ‘Music In The Aire’ and ‘Dear Life’ were some kind of flash in the pan.

‘Strong Against The Wind’ takes a more natural route, but sounds like a third rate rehash of a ballad Peterik wrote for Toby Hitchcock. There’s a nice, understated guitar part complimenting a strong vocal from Black Rose Maze’s Rosa Laricchiuta, but the overall style manages to be bombastic and saccharine at the same time. It honestly belongs in a dodgy rock musical – or farmed out to Celine Dion in Jim Steinman’s absence. As featured on this disc, it’s a skipper after the first cursory listen, as is ‘Walk Like Royalty’, a wannabe show tune with harpsichords and orchestrated parts that encourages Kimi Hayes to indulge in the musical theatre equivalent of extreme scenery chewing. As someone who’d previously been involved with the Broadway production of ‘Chicago’, she has far more of a right to such over-indulgence than most of these performers, but it doesn’t make it any less nasty.

Despite Peterik’s best efforts and a roll call of decent guests, this can’t be recommended to everyone. When it’s good, it’s great, but that never quite balances out those massive theatrical aspirations. Also, what’s with that title? Yes, it’s an obvious call back to Jim’s greatest commercial success with ‘Eye of The Tiger’, but in terms of timing, with the world getting really hot on gender equality, the label couldn’t have saddled it with much worse. It’s not misogynistic like some older rock bands’ choices, but it’s still a bit...sad, quite honestly, that it was deemed necessary to convey such a patronising angle towards its vocal performers, openly suggesting a “weaker sex cutting loose”. Whatever, the more patient Survivor fan should be able to find a handful of tracks on this disc that’ll meet their approval in time – making it infinitely better than most Pride of Lions albums – but that’s obviously still a very poor show if measured directly against Peterik’s mid 80s peak.