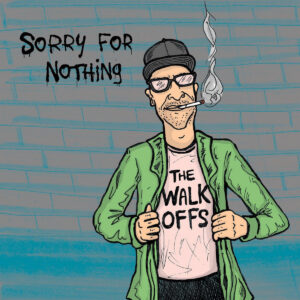 The lead track ‘Breaking Even’ opens with a barrage of huge chords that, surprisingly, hint at one of Bob Seger’s older, rockier numbers, but morphs into something far closer to previous Walk-Offs works once Rob Hankosky starts to sing. He doesn’t have the strongest of voices, but his no-frills approach is perfect for the job, sounding especially confident once he starts to sing about having nightmares and being down on his luck, whilst the rest of the band set about throwing out the kind of trashy riffs worthy of Watts. By the second verse, the track sounds like something you’ve always known – such is The Walk Offs’ general approach – and somewhere around the third spin, its chorus starts to stick. Although the Replacements-ish vibes are cool enough at face value, it’s actually the lead guitar work that lends the performance its greatest moment when six stringer Fred Fechter drops in with a raucous solo that lifts everything considerably. Via a carefree, chugging riff and more bar-room swagger, ‘Lonely In Love’ brings more of the same, but conveys a feeling of a band now warming up. Atop a great riff, Rob’s natural vocals show a little more confidence and, from a lyrical perspective, everything retains a similar feeling of self-depreciation (in this case, a mention of shooting oneself in the foot is particularly telling). However, thanks to some great music, the relative negativity in The Walk Offs’ songs never feels too downbeat or disheartening. Fans of these trashy, retro sounds will certainly get a kick out of Fred’s lead work once more, and in terms of a band pulling together and sounding like they’re having a good time, it more than hits the mark.

Adding a country rock influence, ‘Moving Forward’ branches out a little more with a general rhythm recalling a couple of The Connells’ rockier workouts from their early days. By concentrating more on a broader melody, the band sound really at ease, and straight away there’s a strength in a jangling riff contrasted by a broad lead guitar sound. Moving into the verse, the bouyancy in those riffs become almost everything, but it’s great to hear more of a harmony vocal taking shape. The best moments hang upon the lyric, and Rob adopts a far more positive outlook than before. “Moving forward, nothing ever lasts / I ain’t got time for the past”, he opines, and his delivery is so optimistic you can almost hear his smile on the recording itself. The rest of the band continue to capitalise on that great, earlier groove and between a rigid bassline and some very Dan Kopko-like guitar parts, this is a great slab of roots rock. It would easily be this EP’s highlight, if not for ‘Looking For Something’ which boasts a brilliant chorus hook that you could imagine coming straight from Paul Westerberg or Slim Dunlap circa 1990. In tapping into the tail end of The Replacements’ work once more, The Walk Offs adopt their natural state, but even though you’ll have heard it all before, there’s a joy to be had when hearing a band cutting loose on such a tried and tested arrangement. As before, a couple of Fred’s lead guitar breaks are great in a really old school style, and the natural feel of the song really captures a love for grubby, bar-room rock in a way that just never gets tired.

At the tail end of the EP, the band show no signs of slowing down or lightening up. ‘Gotta Got Up’ mixes sounds from Bash & Pop’s comeback album with bits and pieces from The Connells and Jay Farrar’s solo output, which, again, provides a great showcase for Rob’s fuzzy rhythm guitar and Fred’s confident lead. In terms of solid roots rock, ‘Point Blank, TX’ is one of the best examples of The Walk Offs’ trashy workouts when drummer Frank Lewis (ex-Leopold Green) pushes forth with some heavy tom work throughout. By relying on a much harder rhythm, the track takes on a slightly darker air, but its repetitive groove and natural vocal style waste no time in attracting the listener. With the moody stance coupled with lyrics regarding “travel, trailers and suicide” it isn’t as much fun as a couple of the other numbers (understandably), but it proves the band aren’t just riding a one-trick pony on loan from the Minnesota nag farm. By injecting bits of Watts and The Dirty Truckers for good measure, it results in some decent old fashioned rock that’s distinctly American and a track that, perhaps, showcases the band’s combined talents a little more directly.

In a great bit of negative self press, The Walk Offs’ twitter account advertises “cheap thrills and lousy songs”. It’s fair to say that ‘Sorry For Nothing’ is better than that. There are moments where the material feels like exactly the kind of thing Black Biscuit were striving for a decade earlier, though the Walk Offs are obviously far, far better (to be fair, you’d struggle to find bands much worse than Black Biscuit) and with a lot of callbacks to The Replacements and their ilk, it more than holds its own. Although it never strives to be original, this EP has a real heart that should more than connect with fans of Nat Freedberg, Watts and Tom Baker & The Snakes. Sometimes that retro familiarity is all you need.