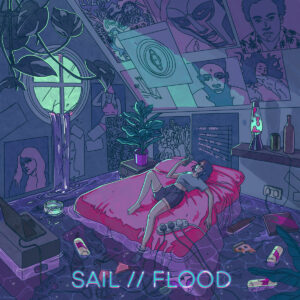 Although Sail are a predominantly heavy act, a quick dig through their back catalogue shows that the UK riff makers are anything but stuck in their ways. Their material often has a stoner and doom undercurrent, but there are various different avenues taken along the way: 2020’s ‘Mannequin’ single displayed a strong bluesy vibe; the title cut from 2017’s ‘Slumbersong’ took an unexpected detour into shimmering dreampop without losing the band’s generally ominous tone and 2019’s ‘Starve’ mixed desert rock grooves with a pleasingly crashy riff that straddled aggression and melody in the most perfect way. The point is, it sort of doesn’t matter where you drop into the band’s work; if you love a heavy riff, there’s almost something to suit, and you’re almost guaranteed to come away feeling very satisfied.

‘Flood’, which made its appearance at the end of a particularly disappointing UK summer 2021, takes the band’s heavier edge and pushes it into new climes once again. In this case, the heaviness is is joined by a speedier tempo and offset by an almost industrial edge. A barrage of clanging guitars and hard edged rhythm occasionally make bits of the track feel as if Sail have been remixed by Al Jourgensen, but at the heart, there’s still enough of a heavy edge to be recognisable. Perhaps one of the biggest surprises here is the use of melodic harmonies on a huge chorus that draws more influence from Biffy Clyro than the usual Sabbath obsessions, while an extended intstrumental coda really accentuates Sail’s desires to mix stoner tropes with more of an alt-metal sound. Despite ‘Flood’ often sounding like a strange composit of three different and very distinct ideas, it has a surprisingly natural flow, and the way a heavy riff is offset by a big hook more than makes this the band’s most confident – and commercial – track to date.

The hard, clanking edge present throughout ‘Flood’ makes it a good candidate for a remix, and the Yonng Bros have been enlisted to compliment the lead track with a welcome retooling. It would be too easy to give the track and obviously industrial send off, of course, and the Bros remix takes a slightly different path, at first stripping the melody back to expose the melodic core of the vocal (and subsequently masking that with cool effects), and pitching that against an electronic pulse, before branching out to make good use of crashing rhythms. The employed rhythms almost sound like the opening drum beats of Led Zeppelin’s ‘When The Levee Breaks’ put through the mangler, but once a heavy drone compliments the beat, it’s much easier to hear where the core of the original track lies. The chorus harmonies, provide the heart once more, but its actually the speedier section at the end that works besr, with an onslaught of angry vocals made angrier thanks to a wall of distortion and semi-jarring, shrill noise that makes Sail sound more like an edgy metalcore band than their usual stoner-fuelled selves. It isn’t ever going to be better than the original cut – it’s hardly likely Sail ever thought it would be, of course – but it’s certainly an interesting alternative.

At the time of this relesae, Sail haven’t released a full length album in four years. The tracks that’ve crept out in the meantime have all been great, and this is no exception. More than ever before, though, ‘Flood’ is the kind of song that’ll pmake listeners hanker after so much more new music than these occasionally dropped digital singles offer. With a distinctive sound that more than deserves to push Sail up the pecking order in terms of cool metal bands, for fans and new listeners alike, this will be a massively welcomed addition to an ever growing digital collection.