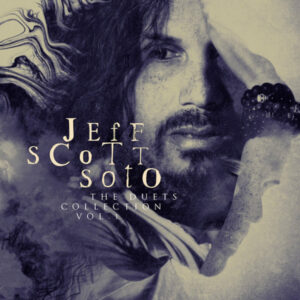 Artists with long careers will inevitably find themselves with their best days behind them. With the passing of time and fading inspiration to contend with, this is only natural. It’s not something that seems to have affected Jeff Scott Soto. In 2020, thirty six years after his breakthrough with Yngwie Malmsteen, he released ‘Wide Awake (In My Dreamland’), one of his finest works to date. He could often be relied upon for a decent record – whether tackling pure melodic rock (2002’s ‘Prism’), unleashing his funky side and inner Prince (1995’s ‘Love Parade’) or fronting something heavier (some great metal albums with Sons of Apollo) – but ‘…Dreamland’ was a cut above.

Given how great that record was, it was a travesty that a global pandemic stopped Jeff taking the songs on the road, but despite the world slowing down, he didn’t stop working. He refocused his attentions and decided to bring the past into the present by re-recording selected tracks from his vast back catalogue with a clutch of the present’s other melodic rock talents. Sometimes reworking the past is a bad idea, especially if the artist isn’t particularly open about allowing other creative souls any real input (Kate Bush, we’re looking at you), but fans need not worry about Jeff tarnishing his already great legacy here. His choice of material is good; his roll-call of friends adds a variety of voices that are complimentary to his own and, regarding a couple of the older songs on the table, there might even be an improvement.

With so much genuinely great, melodic material to pick from, JSS could’ve easily sidelined his past with a couple of metal shredders, but it’s sort of impressive that he isn’t shy of that part of his past. Fair play, he’s not dragged Yngwie’s ‘I Am A Viking’ out of mothballs, but he’s gone as far back in revisiting ‘Don’t Let It End’ (one of the better tracks from Malmsteen’s ‘Marching Out’). No longer hampered by a thin 80s sound, the new recording sounds much bigger, with guitarists Jorge Salan and Howie Simon delivering some huge tones and a superb solo or two, but it’s the vocals that are the biggest draw. Teaming up with ex-Animal Drive man Dino Jelusick, Soto tackles the decades old tune as if it’s still a core part of his repertoire. During the quiet first verse, Jeff and Dino alternate on each line – with Dino given the unenviable task of delivering the highest notes – before moving into the chunkier section where a verse each allows a greater insight into their combined talents. As you would expect, Dino takes this old chestnut in his stride, but it’s the few moments where the pair harmonise that this tune really comes to life. Likewise, Axel Rudi Pell’s ‘Warrior’ (originally from 1994) sounds much warmer and more like something within the melodic rock sphere thanks to a much beefier guitar sound and a welcome use of harmonies. Sure, lyrically, it’s still hackneyed old metal balls, but JSS’s enthusiasm and the unlikely addition of Hardline’s Johnny Gioeli on second vocal certainly make it more palatable for the more discerning rock fan. Despite the bombastic lyric, it would take a hard heart to dislike this new version, especially since Soto appears to be in much better voice than he was twenty five years previously. Unbelievable, but true…

A trilogy of Talisman numbers take a little more time to adjust, but these each bring something to the table in terms of both vocal talent and allowing the listener to appreciate the songs in a slightly different way. Mr. Big’s Eric Martin takes the reins on a version of ‘Mysterious’ and although his voice isn’t as smooth as it once was, he’s still easily recognisable and the number’s huge AOR hook is a good fit for him. Sometime Tamplin/Talisman six stringer Howie Simon drives home a funky riff with ease, but even his best work pales in comparison to the vocalists; Jeff and Eric sound great in harmony, and although you’d expect the chorus to be the real highlight here, it’s actually the last verse that catches the ear the most, since Eric appears to have warmed up. Once he starts a vocal to and fro with JSS on the coda, and the guitarists drop in some furious leads, everything escalates to top grade melodic rock. It’s also so natural that it’s hard to believe the recording would have been made in isolated circumstances. ‘I’ll Be Waiting’ (with Shaman’s Alrino Netto) is played completely straight, but there seemed little point in shaking things up unnecessarily given that the track is already one of the most perfect melodic rockers. On first listen, you may find yourself wondering where Netto actually is since JSS absolutely dominates during the main hook, but he’s there just waiting to give the second verse a kick. After so long, it’s strange to hear the over familiar words coupled with such a strong accent, but it’s a grand take all things considered, showing how well the best Talisman tunes have endured the passing of time. The superbly funky ‘Color My XTC’ could have been the trickiest Talisman number to pull off effectively, but Electric Mob’s Renan Zonta grabs the busy quasi-rap vocal with both hands and not only runs with it, but actually makes it sound as if it were made expressly for him. It’s such a good performance that there are huge chunks of the track where JSS takes a back seat, merely dropping in a backing vocal or harmony as needed. When Talisman released ‘Humanimal’ in the early 90s, it was a genuine game-changer, and this re-imagined version more than shows their funk metal side in a perfect way. It’s so good that it might just equal the original cut. A special mention should go to bassist Tony Dickinson too, since recapturing the magic of Marcel Jacob’s best basslines is not an easy task, but his driving style is pretty much perfect throughout.

A much overlooked period of Jeff’s career, Eyes released a couple of great AOR albums in the early 90s [a great time for melodic rock releases, despite tedious bores telling you that “grunge killed it all; newsflash: it really didn’t] and their first album is fondly remembered here with a take on ‘Callin’ All Girls’. On the surface, it has a strong melody that would have been well suited to Eric Martin, but perhaps getting Eric to sing something that sounds like a chunkier version of something from Mr. Big’s debut would’ve been too easy. Instead, the guest role is filled by Sir Russell Allen – he of massive pipes and prog metal bombast. His band Symphony X absolutely piss over Dream Theater in terms of talent and the understanding of actual melodies, and there isn’t much that Russ can’t sing effectively. It’s not often you get to hear him working with something this light, though, so it’s a great reminder that not only can he do restraint when needed, but also that the softer side of his voice is capable of latching onto brilliant melodies. Here, his slightly theatrical tendencies take a backseat so a great AOR harmony can compliment JSS throughout. It mightn’t ever become your favourite recording – on its day, the Eyes debut was hard to beat – but, as with most of these tracks, it’s interesting to hear it with a new coat of paint, figuratively speaking. If Russell Allen seemed like a left field choice, then Candlemass’ Mats Leven is surely the most unexpected, but here he is grumbling his way through Humanimal’s ‘Angel 2 Be Found’ in what is certainly destined to be this album’s most divisive performance. Luckily, with the help of some solid and slightly funky melodic rock – a sidestep from classic Talisman – he sort of fits, and with JSS dropping in some huge harmonies en route, it’s a reasonable listen, even if it’s outshone by most of the competition.

As much a showcase for some of Howie Simon’s most melodic guitar work as the guest vocal performances, the Soul Sirkus track ‘Coming Home’ ventures further into ballad territory than most of the choices here. It’s a pleasant tune regardless of whom is joining Jeff, but there are a couple of moments where Journey’s Deen Castronovo might not have seemed like the best choice. As shown on the excellent Gioeli-Castronovo album, he has a great voice, but there’s something about this track that makes him sound like Steve Perry with a cold. By the halfway mark, however, it’s clear why he’s got the job, and a once indifferent voice gets to soar, creating a terrific crescendo, lending the album some of its finest – and purest – AOR sounds. ‘Believe In Me’ (featuring Inglorious man Nathan James) has a slightly more retro feel in comparison to the original cut, due to James possessing a huge, slightly bluesy style comparable to the young David Coverdale. Although played straight, the end result is just as terrific, whilst ‘Holding On’ (featuring Spektra’s BJ) definitely adds a little more to the overall quality in straight melodic rock terms without really standing out. Truthfully, there’s very little on this disc that you would consider “a skipper”. The closest it comes is with the cheesy ‘Livin’ The Life’ (from the terrible ‘Rock Star’ movie), which although represents an affectionate take on huge haired melodic metal from years past, its onslaught of clichés doesn’t really sound any better with an extra harmony vocal. That’s certainly not a sleight on Eclipse’s Erik Martenssen who actually sounds like he’s having the best time ever, but from a listeners’ perspective, it remains the kind of track people will love or hate.

It may not have been created in a perfect world or under the most ideal of circumstances, but ‘The Duets Collection, Volume 1’ is the kind of faux retrospective that makes you appreciate not only how good a vocalist Jeff still is – at a time when so many of his peers sound old, a little ragged and even flat-out ropey – but also how well his voice works with others. Almost always, his voice has enough flair to fit with almost anyone. The fact that Dino Jelusick and Eric Martin are poles apart in terms of performers and yet both sound like great singing partners for Soto is testament to that. For anyone with the slightest interest in Soto’s previous work, this is both a very cool listen and a welcome addition to his already strong catalogue.