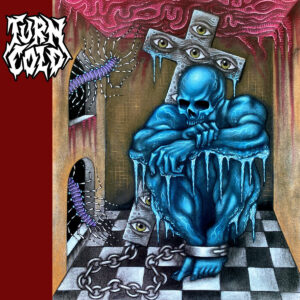 Turn Cold’s blend of thrash and hardcore draws a heavy influence from the both styles’ late eighties and early nineties glory years, creating a sound that has a timeless appeal. Their debut EP ‘Break Your Faith’ is by no means an easy nostalgia trip, though: its core sound also carries more of a contemporary edge through even heavier breakdowns and a socially conscious set of lyrics. During three intense numbers, the Atlanta based band share themes of inner strength and dealing with mental health issues, spurred on by the ongoing pandemic lockdown in which the demo material was recorded. The end result is an uncompromising musical statement.

The old school thrash elements are more than advertised within the artwork itself, which might remind listeners over a certain age of cult works by Prong, Coroner and other speed driven pioneers. …And indeed, although its visual aspect more than calls back to the albums from labels like Megaforce and Under One Flag, it’s perfectly suited to the music held within. The title cut wastes no time in introducing this band’s gifts for riffs with an opening salvo that sounds like classic Prong, tempered by some grit from Anthrax’s mid 90s hardcore diversion. Within just two bars, they sound like a band absolutely ready to take on the world, and although Sten’s slightly scratchy vocal sounds more suited to a straight hardcore band, he helps to give Turn Cold an extra edge. Shifting into an even faster riff, the band’s love of the Bay Area classics is clear for all to hear with guitarist Brett absolutely tearing it up, while the rhythm section lock into a lightning speed groove worthy of early Testament. By the mid point of the track, the band are so immersed in classic thrash tropes you’ll even hear bits of early Metallica creeping in, and by the arrival of a raw and echoing lead break – despite being delivered as if at the end of a corridor, or at least three rooms away – Turn Cold sound like they truly mean business.

Stretching out a little, the intro to ‘Delusion Solution’ carries more than a hint of ‘For Whom The Bell Tolls’ within its ominous and stomping groove, but it gives the whole band plenty to work with and shows how Turn Cold are able to take the familiar and redress it with even more weight. Moving into the bulk of the track, the speed intensifies and the riffs come fast, with their DIY charm harking back to the genre’s glory years once more. These four minutes are pretty intense, but for the older thrash fan, there’s plenty of entertainment to be had throughout. Of particular note is a couple of riffs that echo peak Slayer, showing tightness and speed from all concerned, and a really high pitched lead break that cranks up the ferocity to almost ridiculous levels. The way Brett’s riffs appear to lock into the bass drum while Sten absolutely canes his voice owes far more to hardcore, but the marriage of the styles is very natural, always showing the band in a really confident manner. The closing number ‘End of My Rope’ was used to promote the EP on YouTube and its easy to see why, since it’s the number which best demonstrates the band’s crossover sound. Throughout the first part of the arrangement, the band’s metallic juggernaut is at full pelt as Matt’s heavy drums collide with a chugging downstrokes. Its brutal sound is peak Turn Cold in so many ways: Sten turns in the most throat rawing vocal, bassist Twitch wrings the bottom end for all it’s worth and Brett brings out yet another, potentially heavier, riff. For the thrash lovers, a couple of musical detours with more of a retro bent will more than suffice; there’s a riff just before the two minute mark that’s a dead ringer for classic Slayer and a couple of other moments where Brett clearly wishes he were in San Francisco circa 1987. It’s all good, but the real highlight comes via a brief but semi-mangled solo that more than suggests a love of the departed Jeff Hanneman’s angular noise.

‘Break Your Faith’ is great, but isn’t a perfect debut by any means; the socially distanced recording doesn’t always lend the end mix quite the sound this band deserves and a few of the vocals are a little harsher than is necessarily required, but there’s plenty to enjoy here. If nothing else, a lot of metal fans will discover a band with a lot of potential and even more gusto.