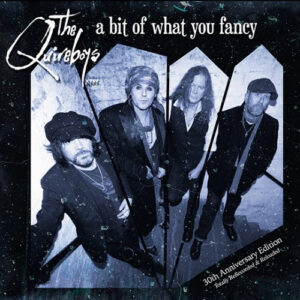 With the material still forming the backbone of the band’s live show three decades later, and having played the likes of ‘7 O’Clock’ and ‘Man On The Loose’ a thousand times, it’s only natural the band would have tightened up over the years. With that in mind, a decision was made to re-record the album in time for its thirtieth anniversary. A global pandemic meant that plans were put on hold and the thirtieth anniversary eventually became the thirty first, but a completely reworked ‘Fancy’ appeared in the summer of 2021 following what felt like a very long gestation period and a lot of promotion.

It was worth waiting for. Unlike some reworkings where the material gets twisted into less imaginative shapes (as with Marillion’s digusting remix/revisitation of ‘Radiation’ and Dare’s completely re-recorded ‘Out of The Silence’), the changes here are far more subtle, and in some cases, an improvement. The biggest difference is in the production values themselves: the band’s retro style no longer feels as if its in a constant battle with a hard 80s sheen. This has the unfortunate effect of making a couple of the bar-room piano parts seem a little less strident (as with the intro to ‘7 O’Clock’ – a tune otherwise dramatically unchanged – and parts of ‘Long Time Comin’ where louder guitars take centre stage), but in the main, most of the changes seem very sympathetic to the job in hand.

‘Take Me Home’ in particular sounds much better with more sedate backing vocals and more of a 70s guitar sound in tow. One of the most Faces-esque tunes in the band’s early arsenal, it sounds more like the 70s homage it was clearly intended to be when complimented by a flatter drum sound and slightly dirtier guitars, and taking a similar tack, the rootsy ‘Roses & Rings’ really seems to benefit from a more muted mix and scratchier vocal. Of particular note here is how truly natural everything feels by the time the band slides into the first instrumental break, with the twin guitars evoking a very retro sound. The playing is left to stand without too much outside interference – certainly sounding more natural compared to the original recording with its hard edged rhythms constantly piercing through the semi-laid back sounds. By choosing to temper that drum sound a little further on ‘Hey You’, the slide guitars attack with more of a swagger, and although Gray’s presence isn’t markedly different to its more famous counterpart, a slightly louder approach to the vocal gives the re-recording more of a very welcomed live feel.

The big ballad ‘I Don’t Love You Anymore’ was always a real highlight when showcasing The Quireboys’ more thoughtful side, and this re-recording holds up very well. With an increase in bass and an underscoring slide guitar offering a crying melody throughout, there’s plenty about this version that calls back to the Faces’ ‘Glad & Sorry’. With a slightly more muted feel and perfect lead guitar creating an attention grabbing crescendo, it’s perhaps the best example of this line-up’s more mature approach to arrangement, while ‘There She Goes Again’ captures the old rock ‘n’ roll swagger with ease. Gray’s ragged vocal occasionally seems to bleed into a couple of the louder guitar parts and, as with the re-recorded ‘7 O’Clock’ the piano could certainly be much louder without feeling intrusive, but with a brass section given more room within the arrangement and – as usual – a much more suitable drum sound holding it all together, the good certainly outweighs the bad here, and this will certainly give fans a welcome alternative to an old favourite.

The band’s desires to revisit the past become more obvious on a couple of the album’s deeper cuts.
‘Misled’ really exploits the band’s self-proclaimed “gypsy rock” sound during the stripped down intro where Spike’s voice takes centre stage, and the previous Faces-esque stomp takes a sidestep into more of a groove laden retro rock. As with most of the new versions of these songs. the harmony vocals are certainly more understated, allowing more of the musical melodies to shine through. Likewise, a more sedate ‘Whippin’ Boy’ showcases a more thoughtful and mature band throughout. The main melody is approached in more of a quiet and menacing way, allowing the bass and guitar plenty of room for manoeuvre, and Gray’s vocal takes on something of disquieting menace since he never appears to raise his voice for dramatic effect, instead choosing to croak his way through the narrative like a world-weary traveller who’s lived to tell this dark tale.

Rounding out the album, ‘Man On The Loose’ remains one of the finest rockers within the band’s canon, and even with reduced backing vox and increased cowbell, it still sounds like the best homage to the mid 70s you’d hope to find; the country inflected ‘Sweet Mary Anne’ works well enough with a rougher feel around the edges and ‘Sex Party’ – although beloved by the early audiences – remains the closest the album gets to filler material. Despite this version featuring a cracking guitar solo placed really high in the mix and much dirtier feel in places, it’s all still a little too throwaway for its own good.

With some strong performances lending a new and sometimes interesting take on old favourites, this feels like it was designed as more than an excuse to earn new royalties (unlike Jeff Lynne completely re-recording ELO’s Greatest Hits). However, for the casual observer, looking purely beyond the obvious differences in Spike’s delivery, most the changes here will certainly seem slight; this is purely a record for the fans.

After so many years, the original album is so ingrained within the listener’s subconscious, it’s unlikely that any of these versions will ever replace the originals in your affections, but with a tight band on show and a little more thought within the arrangements themselves, a strong case could actually be made for ‘Whippin’ Boy’ and ‘Roses & Rings’ being superior in their own way. In terms of “stop-gap” releases, this anniversary album definitely gives the bigger Quireboys fan a very welcome distraction.

1 thought on “THE QUIREBOYS – A Bit Of What You Fancy: 30th Anniversary Edition”