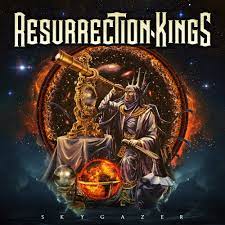 The title track opens this second record with a massive set of riffs, chugging away with a slightly downtuned sound against a weighty rhythm. Within less than a minute, it announces the band’s return in a very grand fashion. With a blanket of keys adding further to an already full-on sound during the chorus, Resurrection Kings go from big to bigger, gradually building upon a more than credible slab of grandiose melodic metal. As before, West’s vocals often valuing volume over technique – but the way in which he delivers faintly ridiculous lyrics about astronomers looking for truth in a completely unflinching way sort of makes him the right man for the job; like the great Dio before him, it’s likely he knows this is ridiculous if over-thought, so it’s best to go in with all guns blazing…which he most certainly does. Goldy, meanwhile, continues to hammer away at a fantastic riff, before offering a busy lead guitar break straight from the glory days of 80s metal. Assuming you can tolerate West’s rather dominant presence there’s so much to like here, despite it all being shamelessly old fashioned.

With Goldy drawing an even more direct influence from his former employer, ‘World’s On Fire’ thunders in the manner of Dio’s ‘Stand Up And Shout’. This gives Resurrection Kings ample opportunity to go off, absolutely full tilt, driven by Appice absolutely pounding the drums, while West belts his lungs into oblivion. Some of the lyrics are horrible clichés – Chas resorts to rhyming “fire” and “spire” before informing everyone that “something wicked this way comes” with an almost knowing glee. It’s best not to pay too much attention to the lyrics, but that can prove tricky when they’re being bellowed at maximum volume… Regardless, this old school metal banger certainly hits the mark in terms of speed and heaviness; plus with Goldy taking a tried and tested sound and applying a dirtier tone, it manages to sound both urgent and impressive long after such a style should’ve sounded stale. ‘Fight Against Our Pride’ mixes more dirty metal riffing with a punchy rhythm, and a few extra harmonies are on hand to help things sound a little different. In this more melodic scenario, West often sounds like a man in the wrong band, but the track is ultimately saved by Goldy dropping in some timeless guitar fills and a impeccably played solo that gains momentum as it goes – first by working some dramatic vibrato, before moving in with some cool sweeps and eventually opting for a full metal shred for good measure. Since its likely that this album is aimed at Goldy’s fanbase first and foremost, they’ll love what’s on offer here.

In a sharp change of mood, ‘Troubled Soul’ trades in the straight up metal for some stompin’ hard rock with blues-rock undertones, allowing Goldy to indulge in a much choppier style. The production style on the album really brings out a live sound on the drums, while a few brave attempts at harmonies suggest the Kings might have been reaching for a Doogie White meets 80s Whitesnake vibe – and largely succeeding, too. The sheer bombast is impressive, and you get the feeling that West is relishing every moment, stretching his voice into blusier climes without having to sacrifice any volume. Subtle it very much isn’t, but in terms of showing Resurrection Kings in a whole different light, it does a near perfect job. ‘Calling All Angels’, meanwhile, offers four minutes of terrific melodic metal tempered with an AOR-ish chorus that gives the whole band plenty to work with. Chas sounds at ease chewing through a sizable chorus while Craig delivers a punchy bassline and overlays that with some strong, chopping guitar riffs. It feels very much like a call back to the early 90s when big hair bands like Heaven’s Edge were unafraid to drop huge radio-friendly choruses into metal-based fare, showing how a decent crunch and strong melody could work effortlessly in tandem. This slightly different revisitation of the past suits Resurrection Kings perfectly, which is more than can be said for the obligatory slow number ‘Don’t Blame Our Love’. Although possibly designed to show off more of West’s range, it really doesn’t do the vocalist – or the album – any real favours. It allows him to croon against a piano (supplied by the omnipresent Alessandro Del Vecchio) and that’s fine enough, but once everything grows into a massive cheese-fest that sounds like a Gary Moore ballad retooled for Toby Hitchcock, the wheels truly come off. West becomes the worst kind of overwrought rock balladeer ever – a feat not helped by the fact that he probably could be heard seven miles away – and between his sheer volume, an average song and some cheap synthesized strings, it’s all best forgotten. CD/streaming skip buttons exist for a good reason.

A genuine stand out, ‘Angry Demons’ begins with a wash of gothy keys before dropping into a slow and heavy riff that calls back to the slow and moody Dio numbers. With those riffs subsiding during the verse and allowing the bass to rise, West trades in his usual bombast for a more soulful vocal and the whole band seems to really gel. When it comes to the chorus, it’s pretty much business as usual with Chas reaching for the heavens with a full set of pipes, but it really works with him crying out against a riff that carries hints of ‘Kashmir’ with a huge Eastern flavour. Into the second verse, things remain on the louder side, but there’s plenty of entertainment to be gleaned from a well constructed riff and, eventually, a tasteful, soaring solo from Goldy himself. Also great, ‘Set Me On Fire’ casts the band in the mould of stomping metallers drawing heavily from an old blues rock jam. The weight of the groove is absolutely immense and the natural sounding recording really puts the focus on Appice, who drives the number with an incredibly weighty sound. As if wrestling with the riff using both hands, West puts in a performance that sounds like Bruce Dickinson circa 1990 only much louder, and combined, the whole band sounds amazing. As always, just don’t pay too much attention to the lyrics: hackneyed and clichéd rhyming makes everything seem as if its been dug up from 1983. In the hands of a master performer like Ronnie James Dio, such things could be forgiven; coming from West and his bigger than life presence, it sounds a bit…silly. Still, nobody ever claimed that this kind of old-school metal was high art, and in this case, the Kings sound truly committed.

When ‘Skygazer’ is good, it’s very good. It’s better than Revolution Kings’ debut and as consistent as Chas’s own West Bound. As good as that may be, it isn’t a patch on Goldy’s other project – the Dio-tastic Dream Child – and the sheer bombast of everything makes it the kind of record best approached three songs at a time. However, its best songs more than demonstrate why Resurrection Kings is a project with some strong foundations, and the very best of those – ‘Angry Demons’ ‘Calling All Angels’ and ‘Troubled Soul’ – definitely deserve a place on any decent metal playlist. It’s fair to say that if you liked the debut, you’ll love this. If the debut left you cold, you should probably check this out anyway, since Goldy offers enough smart guitar playing to entertain and a few of the massive choruses are surprisingly enduring. Despite the likelihood of the listener having some early misgivings, this is a solid effort all round.