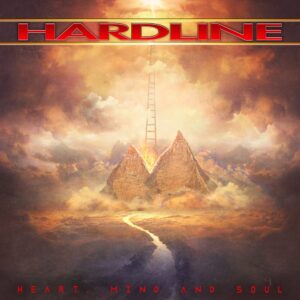 The best bits of 2021’s ‘Heart, Mind And Soul’ blow the previous two Hardline albums out of the water. In fact, the record’s opening run of tracks presents some of their most enjoyable material since ‘Double Eclipse’ some thirty years earlier. A bold claim, maybe, but it really is that good. Part of the album’s strength certainly comes from the band sticking to what they know, but there’s a certain something in the best performances that finds more of a melodic sweet spot than before.

Before reaching for those big melodies, though, ‘Fuel To The Fire’ gets everything underway with a massive, attention grabbing rocker that could easily sit alongside the best bits of ‘Life’. Right from the off, guitarist Mario Percudani is in the driving seat, throwing out a blues rock influenced riff, his notes drenched in a melodic metal tone. Gioeli, meanwhile, compliments his work with the kind of wordless melody that appears to be inspired by Sammy Hagar. After warming up, the band crashes in on a mid tempo groove with drummer Marco Di Salvia hitting his toms and snare with a real force. As the riff gains traction, everything sort of sounds like Hardline circa 2016 playing something from Whitesnake circa ‘Slip of The Tongue’, but in terms of punchy melodic rock, it’s great. Those who might be unconvinced should stick around for the chorus, when Hardline stoke up the backing vocals on a simple call and response arrangement that taps directly into their AOR origins. With a great solo en route and Gioeli sounding incredibly comfortable throughout – even when stretching for those bigger, harder notes – it’s a perfect opener. ‘Surrender’ clings on to a guitar dominated sound, but a few vague Bon Jovi-isms and another harmonious hook allow a little more of the traditional Hardline to creep through. It’s all very meat and potatoes stuff for the veteran band, but they rarely sounded so good. By the time the track hits the mid-point, the chorus has played out a couple of times and you’ve had time to take in Percudani’s very 90s sounding guitar tones, it has the potential to become a real favourite. Moving into more of an AOR territory, ‘If I Could I Would’ opens with a huge riff and bright sounding keys that could have been inspired by a Survivor album circa 1986. The verse scales everything back to allow Johnny’s voice to take centre stage, and the way he lets his natural tones slide across stabbed piano creates a very pure AOR set up. For the fans, of course, this will also create something that’s instantly appealing. Cranking the guitars and going head first into a massively hooky chorus, Hardline almost sound like a half forgotten band from the sadly missed MTM label (given that the band is now almost entirely Italian, this is no surprise), but Gioeli’s command of a strong melody and distinctive sound will be more than enough for most to recognise this as being the Hardline from recent years.

‘Like That’ offers more very late 80s sounding AOR that makes the very best from a simple hook and huge harmonies, and despite a few lyrical vagueries, it has plenty of charm. Often sounding like an old melodic rocker that would’ve suited Joe Lynn Turner, its huge vocal is brilliantly complimented by sweeping guitar lines where Percudani weaves in and out of the arrangement’s punchier edges without making everything feel either claustrophobic or cluttered in any way. Mixing their tried and tested melodic rock sound with the kind of speed driven rhythms that appear to take cues from Michael Sembello’s ‘Maniac’, ‘Waiting For Your Fall’ is another taut rocker that pushes Gioeli’s voice to its hardest edge without feeling uncomfortable, while the rest of the band use the four minutes to really blow away the cobwebs. Going at full pelt – though without losing too much of their melodic core – bassist Anna Portalupi and drummer Di Salvia show a very natural ability as a tight rhythm section and although he’s far too low in the end mix, keys man Alessandro Del Vecchio fills plenty of space with some swirling, very retro synths. They’re all quickly outshone by a nifty guitar solo that shows a real flair for filling space without being too flashy. If it weren’t clear before, Percudani is a great player; that comes across at all times, not only in what he plays, but also in his knowing when not to play. He seems to understand that his big tones are crucial to the Hardline sound in this configuration, yet also knows this band is far more than “The Mario Percudani Show”.

The first of the album’s big ballads, ‘Heavenly’ is far less interesting. Maybe its because the band are playing even more to type. Maybe its that at almost seven minutes, it’s far, far too long. Either way, it’s the only time Hardline appear to go through the motions this time out. Regardless, there are a couple of notable moments with the lead guitar offering a couple more great solos and the piano work occasionally sounding as if it’ll lapse into something from the legendary Jonathan Cain. Unfortunately, that isn’t quite enough to escape the fact that Gioeli fails to read the room, over-singing at almost every turn, and stretching uncomfortably for some very loud notes. It’s almost as if he’s being goaded by Toby Hitchcock… Whether you love this track or hate it, though, you certainly couldn’t accuse the band of “phoning it in”…

Even towards the end of the album, the material shows no sign of flagging, with the Eric Martin-esque ‘Searching For Grace’ highlighting some rather nice piano work, twin lead guitars and an absolutely killer vocal; the very knowing ‘80s Moment’ presenting some throwaway rock fun supplied by a swaggering riff, hints of House of Shakira in the melody and an especially aggressive lead guitar. Finally, ‘We Belong’ winding everything down with a sharp change of mood. The band reach for the acoustics, and with a very early 90s charm, they lose themselves in a tune that sounds like a cross between Mr. Big, Brett Walker and something written by Its Alive’s Max Martin. Once you get past the brief disappointment of this not being a cover of the Lowen & Navarro song (as made famous by Pat Benatar), it has plenty of its own appeal. Of particular note are Percudani’s lead guitar fills, yet again, for the most part providing a lovely, semi-bluesy counterpart to the stripped back and easy vibe, while Del Vecchio’s piano work finds something of a comfortable space when recreating the tones from rock ballads past. Although it sometimes makes Hardline sound as if they’re channelling MTV Unplugged and recycling something crafted from the purest cheese, for long-time AOR buffs, it’ll more than appeal with its over familiar approach.

It may not be fashionable, but so much of the material on this album feels hugely nostalgic. It often seems to call back to the last days of melodic rock’s glory days in America, while keeping a toe or two in the twenty first century European scene. For lovers of good, solid, melodic hard rock, it certainly won’t bring anything new, but fans who’ve enjoyed some of Hardline’s previous work will definitely find ‘Heart, Mind And Soul’ an invaluable addition to their collection. Along with Robin McAuley’s ‘Standing On The Edge’, this is a sure fire contender for 2021’s best AOR/melodic rock disc.