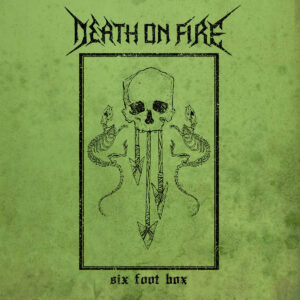 The title cut is actually the most difficult listen of all. Opening with cold and clanging chords, it immediately introduces a very gothic theme, something that escalates via a slow, crooned vocal. After using that over a few bars to reel in the listener, things take a really ugly turn when frontman Tim Kinefic trades in the moody style for a louder musical core driven by a relentless howl; a vocal where he forces his throat to give the most tuneless roar, as if this number is a soul cleansing therapy for his internal pain. It’s horrible, yet something about it works – largely through its own arrogance, but also through the band having absorbed so many influences from an extreme metal past. Luckily, the second verse reintroduces the gothic edges, and the riffs go about their business sounding like a DIY My Dying Bride, with the melodic core augmented by some pleasing clean toned guitar work. Overall, there’s a lot about this track that manages to be both unsettling and yet oddly fascinating. If you can make it through, the other pair of numbers are superior at every turn, not least of all due to an increasing focus on faster, thrash-oriented riffs, but also thanks to the vocal seeming less important.

‘A Hell of Our Own Design’ presents an especially taut four minutes by throwing out a barrage of old school thrash riffs, tempered by more of a proggy/tech metal bent. It doesn’t even offer the listener the grace of an intro to adjust to the change of style and pace; the band merely drop any unsuspecting ears straight in the eye of their musical storm, as riffs falling between classic Testament and early In Flames do battle behind a melodic death metal roar. For those craving a little more melody, the more intense verses are broken up by instrumental passages working a superb instrumental counterpoint, while a couple of the lead guitars explore an old-fashioned twin lead sound. It’s as if there are three different ideas here battling for you attention, and at any given time, any one of those could be your favourite. What’s most important is that the band never falter or ever give the feeling they may be wedging too much in: each passage flows into the next very naturally, before twisting back to the original melodic death/thrash vibe, always showcasing a tight band who deserve a much bigger recording budget.

In terms of all round interest and classic metal melodies, most of the band’s appeal comes through during the final track, ‘Begging For Air’. Having now truly warmed up, this number basically combines all of Death On Fire’s best ideas to create a metal epic. The intro suggests a real grandiosity when twin lead guitars provide a fanfare of escalating notes, before a jagged riff recreates a perfect 80s thrash backdrop. As if these nods to Testament and Slayer weren’t enough, the core of the track introduces a couple of prog metal time-signature shifts, along with a much denser sound hinting at a love for metalcore and the extreme groove metal sounds of early Lamb of God. It’s the perfect musical foil for Kinefic’s uncompromising guttural roar, while the the featured solo indulges in a world of clean toned fretboard melting that comes closer to old school Euro thrash than Death On Fire’s more death-oriented anger, something which – again – suggests with time and money, this band could certainly be capable of creating something closer In Flames and Soilwork.

Previous press for the band has described them as “a band who will never bend the knee”, a now unfortunate choice of phrase that actually makes the band sound socio-politically ignorant, when the original statement was clearly suggesting they make their own music without compromise. …And that lack of compromise very much provides the heart of this release. Whether lurching through a doomy swamp, or allowing husks of vocal to collide with Testament-infused riffs before twisting into even more intense shapes, this is music created in Death On Fire’s own clear, yet complex vision. It cares not for a huge commercial success, and instead, just brings massive riffs to those who still crave them. The rawness of the recording doesn’t always afford the riffs the greatest send off, but in terms of attitude and all-round ideas, ‘Six Foot Box’ is certainly solid enough.

[Tim Kenific was also the driving force behind the short-lived grindcore project Alpha-O-Maga. You can read a review of their debut here.]