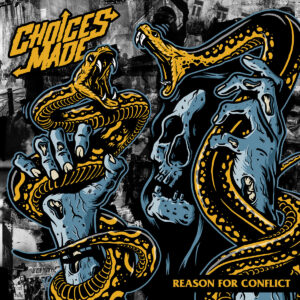 Taking cues from the classic hardcore sounds of Ignite and the metallic edge of Cancer Bats, Choices Made deliver a world of fantastic riffs on their third EP ‘Reason For Conflict’. It’s half dozen tracks showcase some superb musicians throughout, and the short and sharp EP format actually helps the band’s pointed messages of unity seem even more forceful.

The first thing that’s notable about this release is its production values. The material has a much bigger sound than their 2019 release ‘Don’t Settle For Them!’ without actually sounding too much more expensive and certainly no more commercial. There’s been an improvement in the song writing stakes too. While previous material like ‘No Loss No Gain’ fared well enough in the crowd shout-along stakes, it’s repetitive one line hook seemed unfinished. There’s nothing of that sort here: these songs sound fully formed; bringers of important socio-political messages that will resonate throughout the hardcore scene. In fact, it’s barely a minute into the title track – used as a brilliant lead off – before the EP’s first manifesto is laid bare. “For fuck’s sake, be a decent human…we don’t need more reason for conflict” screams frontman Josh in an impassioned cry for unity, while some timeless shouty backing vocals calling back to the earliest Sick of It All recordings are complimented further by a couple of very hefty metal-edged breakdowns. Stretching out a little and introducing an even dirtier guitar sound, the hardcore grooves throughout ‘Greed’ are tough enough to rival Hatebreed at their best, while a couple of speedier interjections give drummer Mike plenty to put his weight behind, before ‘Don’t Waste My Time’ flaunts some straight old-school hardcore thrashing interjected with a world of gang vocals. It doesn’t stretch the boundaries of the genre in any way, but in under two minutes, it more than showcases a superb band at work, especially when dropping into the slower riffs that lend the track its vital sledgehammer groove.

The double whammy of ‘Nothing Without’ and ‘Sideroads’ offers, in essence, more of the same from a musical standpoint, with Steve and Mike locking down some amazing riffs with a genuine force, underscored by Andrew’s hefty bass. Of course, a release such as this doesn’t necessarily need a broad variety; it’s power comes from a sharp musical and lyrical focus, and those who’ve already latched onto Choices Made will certainly plenty to relate within the messages being shared. The former’s plea for finding personal inner strength (“We are nothing without the scars and bruises…nothing without perseverance and passion – just take it in stride”) and the latter’s exploration of open communication (“ignorance is a one way street with no fucking sideroads”), being railroaded by bad government decisions (“we’re right where they want us”) and change for the better (“let’s change course and be decent humans”) are all fairly universal, but set against some great riffs, each angry syllable sounds like it helps to form a vital mantra.

Released as a digital single ahead of the EP itself, ‘What’s Your Plan’ provides an easy highlight. Opening with a strong bass riff underscored by furious drums, it finds a place alongside some of the greatest 90s hardcore from the Revelation label with echoes of bands like Judge and Better Than A Thousand. Obviously for Choices Made, this is bread and butter stuff, but the passion in the playing ensures that something of a tried and tested style sounds anything but stale. In terms of solid hardcore/crossover punk, you won’t find much better.

With its potent mix of hard edged riffs and thoughtful lyrical concerns, this is a release that deserves to be explored by a broad cross section of punk fans. A few of the vocals might be an acquired taste, but the overall commitment to both sound and message – combined with superior production values – makes for a release that’s pretty much essential. Pick up a download at your earliest opportunity – you won’t regret it.