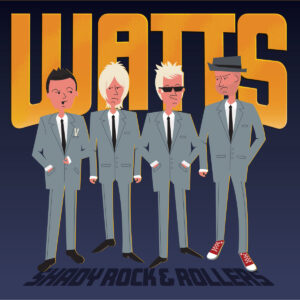 You could say this fifth album was a long time coming, but in many ways, it was worth the wait. It brings together the various digital tracks issued between 2019 and the beginning of 2021 – every one a welcome addition to the full length disc, despite a few being in circulation for some time – and also gives listeners a handful of brand spanking new jams that manage to add a lot to the Watts catalogue despite never really being that brave in terms of breaking new ground. Needless to say, there’s a lot to enjoy here if you’re already a fan…and if you’re not, ‘Shady Rock & Rollers’ has the potential to make you one.

An instant highlight – and a contender for one of the greatest Watts tracks to date – ‘Heavy Metal Kids’ couples an early Black Crowes influenced riff to a punchy rhythm, instantly setting up something in the “classic Watts” mould. Kopko’s ragged vocal steers a surprising pop melody between the overdriven riffs with ease. As the track works its huge sound, you get the feeling that the band are having a great time cranking their way through something that’s very familiar. Then, just enough to stop it becoming Watts-by-numbers, a quick burst of Brian May-esque guitar harmonics punch through the instrumental break, before a final rousing chorus sounds like Kopko and Blout have overdosed on classic Mott The Hoople during lockdown. In a little over three minutes, this is the perfect snapshot of the Watts core sound. Similarly effortless, ‘Seventeen’, is truly superb. Serving up the kind of bar-room riff that would have suited Slim Dunlap in his prime and boosting that with some brilliantly sassy horns that sound as if they’ve been lifted from The Stones’ classic ‘Bitch’, it’s a track with some serious attitude. The Stones-esque swagger comes through heavily throughout and the whole performance shows how well these musicians work together after so many years. Of particular note here, the lead guitar break values attitude over flashiness and Dan Kopko’s whiskey soaked vocal recalls all of the stand-out moments from Watts’ career defining album ‘The Black Heart of Rock N Roll’, providing a much stronger link with the band’s past. It might sound a little glib, but in terms of both excitement and timeless appeal, ‘Seventeen’ sees Watts turning in a really impressive performance. The fact that fans may well have had a digital copy of the track for over a year by the time this album came out really shouldn’t matter; hearing it among other well crafted tracks seems to make it stronger somehow.

In a slight change from the typical Watts mood, ‘Loud & Fast’ transposes the expected Stones-y sound to something with a heavy glam stomp. With a choir of chorus vocals, there’s a lot here that sounds both like a deep cut from 1973 and a homage to the best Gilby Clarke releases from the mid 90s. Sure, the hook is hugely cheesy (“that’s how I want my rock and roll”, indeed…), but Watts deliver it with just enough attitude to make it work. If the lyrics are a little too much on the clichéd side, the music certainly wins out, with Blout’s chunky rhythm guitar sounding especially weighty throughout, while an unexpected twin lead adds a genuine flair when needed. ‘When The Party Ends’ isn’t quite as sharp, but that’s not to say it doesn’t have its own rough and ready charm. With more of a mid-tempo mood, the party spirit is absent (as suggested by the hook itself), but between a world of ringing guitars, a forthright vocal and the sound of a band who just fall into such a style naturally, it works well enough for the job in hand, even if in comparison to the album’s best tunes it seems geared far more towards the big fan.

Another early release single, ‘Breaking Glass’ brings more big riffs via an even bigger 70s throwback sound. During the intro John Lynch’s obsession with KISS really cuts through, making an instant impression along with Tim McCoy’s fat bassline and a chunky Ace Frehley inspired riff. Moving into the chorus, the lead vocal is ragged but loaded with a natural bar-room appeal. A simple hook with a tried and tested quality suggests a solid number before a Thin Lizzy-esque twin lead guitar tops everything in style, making a track that covers so much of classic rock’s history. As with the best Watts tracks, there’s a hefty amount of recycling going on, but it’s all recycled with love… ‘Queens’ has a sense of drive that places Boston’s favourite sons somewhere between The Dictators and Johnny Thunders. The track combines yet another huge but simple hook with a multi-layered vocal that somehow manages to sound deeper than Watts ever have before, yet still retains something of a familiar and gravelly quality. If anything sticks, though, its the riff, and by trading in some of the Keef ‘n’ Ron schtik for something more within the proto-punk sphere, Blout and Kopko play up a storm. There’s time enough for a more typical Watts interlude too, and with McCoy wielding another chunky bottom end, it becomes a genuine tour-de-force of retro rawk. Opting for something slow and vaguely bluesy, ‘Shady’ highlights a gruff vocal against soaring guitars throughout a number that calls back to 90s revivalists like The Quireboys. With a more mature mood at their disposal and featuring a fine lead guitar break in the “Faces ballad” tradition, Watts attempt to give fans something with a greater depth. The fact that they’re able to do so without either losing too much of their 70s party spirit is testament to a great arrangement.

Those who want no-frills rock should take an instant liking to ‘The Night The Lights Went Down’ where the band returns to their much loved Rolling Stones / Izzy Stradlin / Tommy Stinson hybrid sound, presenting a swaggering 70s riff coupled with a naturally retro vocal. Chorus wise, things never quite rise to the promise of the main riff, but with a brilliantly 70s derived guitar solo along the way and yetmore nods to Keef and Ron, it really grows on the listener in a way that suggests it might eventually find a place among older Watts favourites. Injecting a similar level of trashiness but applying it to more of an early 90s Izzy Stradlin sound, ‘Shocking Pink’ is great, musically speaking. The no nonsense riffs owe as much to Tom Baker and The Dirty Truckers as old Watts bangers. However, it suffers a little from having a one-line chorus. Watts have never pretended to be Bob Dylan or Adam Duritz in the storytelling or syllable stakes, but you’d hope for more of a hook than repetition of the title over and over. It’s very much rescued by the music, with the lead guitars sounding especially cool, and The fact that it’s this release’s “filler” track says almost as much about the strength of the other nine songs as any perceived weakness here.

Included as a bonus track on the CD, the title track from their digital release ‘All Done With Rock N Roll’ (first issued all the way back in 2018) sounds very natural alongside the more recent songs, but given Watts’ tendency for delivering music that already sounds decades old, this shouldn’t come as much of a surprise. In terms of arrangement, it’s as huge as it ever was, and right from the start with Lynch’s drum kit leading the charge with a hefty thump, it’s one of the band’s sturdiest workouts. The vocal takes on a very 60s edge to its melody which contrasts nicely with the riff, while the application of a twin guitar assault making great use of an old fashioned stereo split provides a standout moment. Along the way, a confident gang vocal gives some indication of how the track would sound if you were lucky enough to catch the band live, but it’s actually the knowing lyric that comes across best of all. Nothing lasts forever, and Watts know it. After recounting the faith they had in rock’s abilities to deliver, the song then gradually says adios to various career staples, referring to the curtain coming down, and of how “the girls no longer come to shows”…and how, eventually, there’s nothing more to give. A heavily treated guitar that almost sounds like a kazoo revisiting an old Beach Boys melody may well be an unsubtle signifier of how the rock business can be something of a mentally exhausting circus, but it more than fits with the tongue in cheek vibe.

With at least five of these tracks having circulated for a year before this album’s release, ‘Shady Rock & Rollers’ almost plays like a pretend “greatest hits” set. It’s a brilliant document of a band doing something they love; a band that knows their sound is timeless, and knows that a well played, tried and tested arrangement can often be more gratifying than any attempt at being flashy. It’s hugely indebted to a classic rock ‘n’ roll past, but it also cements Watts’ place as one of the best retro rock bands that most people outside Boston have never heard. Don’t miss it!