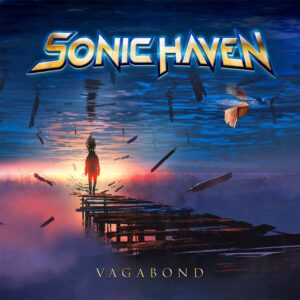 In guitarist Carsten Stepanowicz, Langans has a more than suitable – and very sympathetic – musical partner. They have a history, of course, having worked together in melodic rock band Radiant, but this shouldn’t be considered a continuation of that band in any way, since Sonic Haven’s much heavier stance is key to most of the most memorable tunes. The album’s title track, ‘Vagabond’ wastes no time in presenting the new band at full tilt, with a barrage of thundering drums and an eighties metal riff tearing at high speed. The bulk of the arrangement calls back to classic Primal Fear, but with a few extra prog metal keys and the kind of vocal that would suit Biff Byford, it feels a little more accessible. The lyrics are overtly macho and potentially quite silly, but with a tightly wound riff and impeccably played lead break giving the number a genuine oomph, it just about gets away with that due to its sheer bombast. The even higher octane metal blast of ‘Back To Mad’ follows, with Carsten absolutely melting his fretboard with thrash inflected rhythms during the intro, playing against various keyboard fills bring to mind an early Dream Theater vibe. Settling into a core melody, the number takes a very trad metal approach and despite first appearances, it’s actually far more melodic than the previous track. Once again, Langhans grabs the reins with both hands and sounds even more assured despite chewing his way through some faintly ridiculous lyrics, but he’s outshone by the great music, which in this instance, peppers classic metal riffs with a couple of AOR tinges. Carsten eventually steals the show with an absolutely perfect solo, where a flurry of metallic notes are tempered with great sweeps and an unexpectedly bluesy tone. In terms of high octane Euro metal, it doesn’t come much better than this. In fact, there’s every chance that Sonic Haven have peaked too early.

‘Back To Mad’ is a hard act to follow, but the run of tracks comprising ‘Nightmares’, ‘Keep The Flame Alive’ and ‘End of The World’ more than keep up the entertainment value, even if they’re not quite as ferocious. ‘Nightmares’ combines a fantastic, tom heavy drum part (courtesy of Silent Force/Rage man André Hilgers) with some jagged riffery that blends bits of old Helloween and Judas Priest to create a strong and retro vibe, again with some terrific twin lead work. With an even greater concession to a melodic metal influence, ‘End of The World’ lends the album another highlight by demonstrating how well the still new band jels, with harmonic guitar parts weaving in and out of a classic 80s metal riff. There’s so much about the arrangement that shows Sonic Haven at their best, and the slightly more tempered music gives Langhans more scope to hold a strong melody throughout. ‘Keep The Flame Alive’, meanwhile, opens with a fantastic riff where a twin lead guitar sound appears to have come straight from Iron Maiden’s ‘Powerslave’ LP, but it proves a red herring once the track transforms itself into an overwrought Euro metal workout. With gang vocals that teeter on the verge of a battle metal bombast and a verse that allows Langhans more of a chance to become the musical equivalent of a theatrical performer, it could be considered an acquired taste, but again, Carsten more than saves the day with some absolutely terrific lead guitar work and his natural ability to steer a classic trad metal riff to glory.

The second half of the album brings far more of the same, but if you’re a fan of the style, that merely means there’s more to enjoy. The album’s best track ‘From White To Black’ provides a superb blend of power metal and huge AOR. In scaling things back just a little, Herbie sounds great when approaching the kind of chorus Jorn Lande would take in his stride, and it’s great to hear an increased use of keyboards beavering away beneath a more Dokken-esque riff. There’s definitely something here that has more in common with Radiant, but for those who may be concerned that this veers to far towards the commercial end of things, Carsten soon redresses the balance when he drops into the album’s heaviest riff. Wielding a much dirtier sound for a few bars, it suggests he’s a big fan of Michael Romeo’s playing on the Symphony X masterpiece ‘The Odyssey’, and although in isolation it would seem at odds with the rest of the track, it actually works quite well as a prelude to a busy solo which, again, shows off the work of a very gifted player. There are guitarists who are much better masters of a riff, but in terms of choosing the right kind of solo each time, Stepanowicz is up there with the best. ‘Blind The Enemy’ teases with yet another riff lifted straight from another Maiden ’84 vintage, before exploding into one of the most no-nonsense power metal anthems, all galloping rhythms and pure adrenalin. Shifting endlessly between mid range growls and full scale wails, Herbie is clearly having the time of his life. With a chorus that sounds like something from a metal themed musical contrasting his boundless wails with a choir of voices, this is peak Sonic Haven in that it somehow rises above genre clichés to sound like the work of a consummate metal band. Factor in a very Judas Priest-esque solo and this isn’t far short of perfect for the style in hand. In closing, ‘Striking Back’ goes all out for cheesy fun with a power meral/battle metal anthem with a huge refrain that actually sounds like it was inspired by an old cartoon from the 80s. As always, though, Herbie and the lads treat it as if it’s high art, giving it the kind of send off that genre greats like HammerFall probably couldn’t beat. If you’ve stuck with the band through to the end, this has more than enough chance of becoming a new favourite.

‘Vagabond’ is very much one of those albums where sheer energy and enthusiasm counts for a hell of a lot. Yes, it could even be considered fairly ridiculous if you start to overthink it, and no, It isn’t especially original but, that said, there’s still more than enough room in the metal world for Sonic Haven’s universe of bombast. Thanks in no small part to some great playing from Carsten and a few massive choruses, this will be a fairly safe purchase for fans of Langhans in general, or as a follow up to that previous Firewind disc.