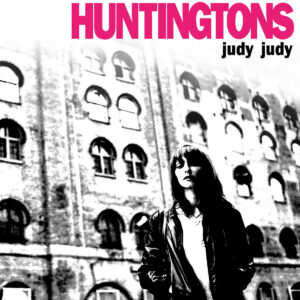 Following a split in 2005, the band got back together for a gig in 2007, which led to an on/off approach band commitments. They eventually recorded an album of all new material in 2020, and ‘¡Muerto, Cárcel o Rocanrol!’ – featuring founding member Cliffy Huntington who’d quit the band in 2001 – was a more than solid return. Keen to keep up momentum, another album ‘Return To Ramonia’ – a Ramones influenced covers collection and a follow up to 1996’s ‘Rocket To Ramonia’ – was scheduled for release during the second half of 2021. In the lead up to the new album, the ‘Judy Judy’ EP was released digitally in May.

The two tracks on ‘Judy Judy’ are everything Huntingtons’ fans could hope for. Thematically linked by both name and style, the chosen songs tap into some really tight Ramonescore. The cover of Ramones’ ‘Judy Is A Punk’ – used as a lead track for the upcoming LP – is played with absolute gusto. The production really captures the sound of the Ramones’ debut from ’76, making both Cliffy and Josh’s guitars sound really thin yet still edgy, and as the band power through the repetitive two minutes, they sound like one of the most spot on Ramones tribute bands ever. Even with frontman Mikey substituting the Joey Ramone trademark drawl with something more in keeping with Ben Weasel’s sneer, it still works brilliantly. No attempt has been made to make the tune their own – no change had been needed, obviously – so it really is the most identikit representation of a Ramones performance you could hope to find, very much creating excitement for the upcoming long player.

On the flip, fans can experience a cover of Riverdales’ ‘Judy Go Home’ which manages to be far better than the original cut. When on form, the Riverdales (featuring Dan Vapid and Ben Weasel) could be one of the very best Ramonescore acts. When they missed the mark (as with bits of their debut release and a very offensive disability slur marring their otherwise fantastic ‘Storm The Streets’ LP from ’97) they missed it spectacularly. Their ‘Judy Go Home’ shows signs of being a great song, but is marred by an odd production choice whereby the dual vocal is swamped in reverb, making everything sound (somewhat unnecessarily) as if being played from the end of a tunnel. Huntingtons put that right by offering a much cleaner performance. This recording is another straight up piece of high octane pop punk where the guitars sound crisp and the vocal – although, bizarrely, less Ben Weasel-like than ‘Judy Is A Punk’ – attacks the lyric with the required amount of classic melodic punk energy. Musically, everything is superb, particularly Chris’s drums during a brief interlude, bringing heavy tom work set against the kind of cheeky bubblegum pop handclaps that would be perfectly suited to Beatnik Termites. Pulling in for a big finish, the call and response vocal gives everything a real lift and, all things considered, this is so perfect you could even believe it to be a Huntingtons original.

In terms of Ramonescore, this release is the perfect stop gap: it gives fans something that’s equal or better than previous work, while stoking excitement for the new LP. Both numbers are great, but it’s ‘Judy Go Home’ that makes this release a truly essential download. On the basis of these tracks alone, Huntingtons should be huge…