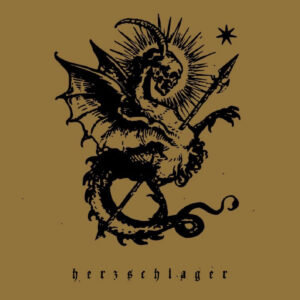 A new band for 2021, Herzschlager capture a brilliant hardcore sound where the speed and bowel rattling elements of crustpunk collide with the crunch of classic hardcore, and the aggressive side of bands like Cancer Bats battles against a few early Machine Head-ish breakdowns. It isn’t exactly the kind of thing you’d expect from two members of Allfather – one of the UK’s best extreme metal acts – but, then again, what are side projects for, if not an excuse to branch out and experiment?

When attacking their material at full pelt, the band – comprising Tom Ballard (vocals) and Alan Cordner (everything else) – sound absolutely feral. With a full compliment of hardcore punk pneumatics, the drums are the main thrust behind ‘Unstoppable Herz’, a near perfect intro to this side project, with Tom growling as if hardcore was always his main outlet. Across three minutes, the duo tap into a really sharp thrash/punk crossover, and although the drums take the weight, the guitars more than deliver with extreme riffs to be delivered at fretboard melting speed. It doesn’t strive to be original, just absolutely committed and intense. On that score, it’s a genuine winner, as it features a blend of pit-baiting breakdowns and harsh riffs that seem pretty much timeless. ‘Rollin’ Bones’ (clocking in at a breakneck 1.15), meanwhile, captures the duo thrashing their way through a piece that sounds like Comeback Kid channelling Discharge. Tom absolutely canes his voice by unleashing a full on rasping yelp – a sound often unheard within the Allfather camp – while Alan thrashes the shit out of his kit. Given the DIY recording style, the sound is surprisingly full; the bottom end, especially, adds to the heavily rhythmic set up. The brief playing time for the track doesn’t give much room for scope; it merely arrives, makes its point with a sledgehammer’s subtlety and then departs – almost like a disclaimer for the whole EP – but keener ears will still find plenty of interest within a selection of hardcore metal toned riffs, particularly during a sharp as hell coda. Branching out a little, ‘Blood Sick’ sets up a brilliant drum and bass intro, driven by rattling strings, before breaking into another brilliant metal/punk hybrid that owes a lot to the early Machine Head in terms of overall crunch, while a combination of screeched and growled vocals appear to battle against each other for dominance. With an already full to bursting arrangement, Herzschlager even manage to squeeze in a lead guitar break that tips the hat to the old crossover acts of the early 90s with a sound that suggests one band member spent his teens devouring works by the likes of D.R.I. and Suicidal Tendencies.

Having worked the core of their art around making as much of a hard and fast noise as possible, that’s not to say there isn’t a truckload of unexpected heavy melody within Herzschlager’s hybrid approach. The disappointingly short ‘Lazarus Moment’ dares to mix a hardcore grind and hugely downtuned riff with an almost glam-ish sense of buoyancy, resulting in the kind of crowd pleasing sing along you’d find on mid 90s Sick of It All albums. The drum and bass parts on this track are especially cool, really capturing a classic feel throughout, while Tom’s shouty vocals more than convey the timeless charm of this style of crossover. Those hoping for something a bit weightier in terms of arrangement will certainly not feel let down by the band’s six minute anthem ‘Herzschlager’, since it really goes for broke in terms of riffs and variety. Presenting a harsh and jagged hardcore/metal blend at first, the barrage of riffs truly disrill the bands sound into its purest form, before moving intoa slower tempo allowing a howling lead guitar to play out a menacing, almost haunting riff as Tom and Al hit upon an unexpected hybrid of hardcore and melodic black metal. Finally, when bowing out with one last classic sledgehammer breakdown, Herzschlager sound ready to take on pretty much anyone in the DIY hardcore scene, sounding so much more purposeful and important than their “artistic distraction during a pandemic” enforced origins would ever have suggested.

Aside from the odd deep growl, there’s almost nothing here you could latch onto the Allfather sound, but in lots of ways, that just makes the project more valid and exciting. The arrangements are as punchy as fuck; the vocals are raw, yet always coherent. And the riffs? Never less than massive. This EP may only represent about seventeen minutes of Herzschlager in full flight, but if you’re on the lookout for some decent hardcore noise, ‘All The Nights Are Done’ should more than fulfil a musical requirement…and then some.