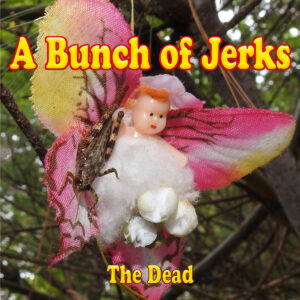 If you’re the kind of person who always expects musical perfection, Boston garage rockers A Bunch of Jerks just won’t be for you. Since their inception, the band have always championed a ragged style: their sound is often driven by an overly loud drum kit; there are never any attempts made to fix any wobbly vocal moments and, generally, you get the feeling the band put the same level of care into their recordings as they put into their frankly terrible choice of band name. Regardless of their trashy aesthetic, they’ve plugged on and won fans and supporters – not least of all from the bands within the Rum Bar family – and by 2020, they seemed to have a fairly solid online presence.

Their ‘White Girl Wasted’ digital EP – released in March ’20 – provided a reasonable snapshot of their no-frills style, presenting front-woman Stabby’s vocals high in the mix on a couple of raw, self-penned tunes. The free download also gave a welcome look into their broad world of influences via a spirited (but somewhat unfussy) cover of The Rezillos’ ‘Flying Saucer Attack’ which showed bassist Bat to be a pleasingly muscular player.

Rounding out the year, their second free download followed the same blueprint, offering fans and first time listeners two Jerks originals and a fun cover. Lead track ‘The Dead’ is a tough, mid paced garage rocker where the dual vocals between Stabby and Bat lend an almost horror rock mood, while the music settles for loud and very natural sounding riffs. As a listener, it sounds a little…unready for consumption, almost as if invited to check out a band rehearsal, yet at the same time, the track has something. The promise of bigger melodies from a more harmonious chorus suggest there’s a gem of an idea hiding within the uneven delivery, and the way the main groove harks back to a few late 60s garage greats shows good taste. A little tightening around the edges could’ve heralded a modern garage gem. ‘Chad’ opts for a far more obvious novelty as the band launch into a slightly sloppy surf rock riff number. It’s very obviously derived from The Surfaris’ ‘Wipe Out’ and they intersperse the familiar tune with overdriven chords to make it more their own. On top of this, the core of the song involves shouting boys’ names as if part of an ironic cheerleading chant, creating something throwaway but fun. In many ways, it offers the perfect snapshot of most of the band’s interests in under two minutes. Whether or not such a disposable frivolity stands up to repeated listening is a different matter. It’s certainly not terrible, but you need to ensure that “fun” is your main listening objective.

As with their earlier digital EP ‘White Girl Wasted’, the biggest item of interest comes in the shape of a cover tune. Here, the band takes an unexpected stab at the Alice Cooper classic ‘No More Mr. Guy’. On the surface, it’s played pretty straight: Glen Buxton’s distinctive opening riff is treated with respect and still sounds like a true classic, even with a little extra volume applied; the lead guitar howls cling onto a very 70s garage rock edginess and the familiar groove remains intact. Naturally, the Jerks are able to give it a slightly different slant thanks to a female vocal, even though none of the gender aspects have been changed. Stabby attacks most lines with a carefree sneer that works and even though she occasionally wobbles on a few of the bigger notes, her staccato delivery of a couple of the more melodic bits at the track’s end help to accentuate the band’s garage-ish roots. Sure, it’ll never replace the original in your long term affections, but it’s great to hear a band that aren’t metal oriented showing their love for some classic Coop.

True to form, A Bunch of Jerks waver between great and unfocused on this release, but as before, there’s a definite feeling that they couldn’t give a five cent fuck if you don’t like them. Whatever, it’s always good to have free tunes – especially with this coming at a time when a string of cancelled and postponed gigs left a world of music lovers in increasingly low spirits. This is worth the effort of grabbing the free download for the Alice cover…and if you like the rest, that’s surely a bonus.