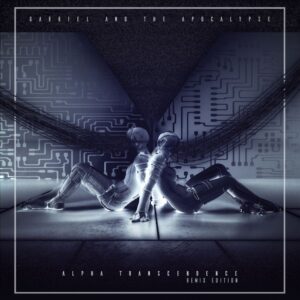 This 2021 EP takes the album’s best moments and leaves them in the hands of various remixers, keeping in the spirit of Nine Inch Nails and Marilyn Manson projects from the mid 90s. Although remix releases can be tricky or dubious affairs (see exhibit A: Nine Inch Nails’ frankly unlistenable ‘Fixed’ EP), that’s really not the case here. Although The Apocalypse obviously don’t have the contacts or budget to call on the likes of Chris Vrenna or Danny Hyde to retool their wares, the assembled remixers each do a fantastic job, often bringing out the appeal in the songs, despite changing the feel quite dramatically in a couple of instances.

Although the ‘Burn It Down’ remix of ‘Systematic Chaos’ isn’t flashy in any way, Stitch Thomas’s decision to replace the guitars with pulse beats against the vocals shifts the track into the realms of early Nine Inch Nails or – more importantly – gives it the feel of a tribute to Gary Numan’s brilliant ‘Dead Son Rising’. The repetitious nature of the beats helps to carry everything, and although this is an exercise in mechanics over heaviness, the sense of groove is immense. The way the rhythms crash against Lindy Gabriel’s almost Manson-esque sneer gives the track all the drive it needs, so even with the guitars removed, this still manages to pack a great punch. Changing the mood, the Timelines mix of ‘PointTHREE’ favours huge swathes of electronica and is unafraid to accentuate big beats with an almost dubstep feel. Again, the solid backdrop provides the core of an arrangement where the beats take so much of the weight, but there’s also a surprising sense of groove set in place, and Timelines are always careful not to smother Lindy’s vocal. Even with a few keyboard sounds that almost seem like an electrical fault, an overall tunefulness (especially in the case of the vocal) remains the key to it all. This is a genuine alternative to the album cut; it would be hard to favour one over the other as they’re both so different – and that, looking at the broader picture, is the art of a great remix. It’s unlikely that Trent Reznor’s world famous posse could work up something more interesting. The Up & Down remix of ‘Electrical Mechanical’ isn’t afraid to give the number an electro-pop slant with some great warbling sounds employed throughout, while a sassy mid tempo beat almost lulls the listener into thinking this could break into a Marilyn Manson remix at any second. The extra beats are fine, but it’s the vocal that wins out, and by overlaying Lindy’s voice with itself in various places, the arrangement is afforded an almost choir-like feel – unusual for this kind of project – ranging from a melodic pop voice to a heavily filtered Lindy sporting a robotic weirdness. All of this has the effect of catching the ear at different points. It doesn’t quite match the opener for essential listens, but certainly provides this EP with something of a highlight.

With an almost retro intrustrial/techno edge applied, the remixed cover of ‘Beds Are Burning’ seems to fare less well at first. This is largely due to the verse relying on the vocal to carry the entirety of the melody and that melody almost feels at odds with the supplied heavy electronica, but things settle down for the chorus when a very 80s synth lightens the mood. Perhaps its due to the track being so well known – hell, there are times when it even feels odd to hear the version on ‘Alpha Bionic’ without Peter Garrett’s trademark vocal sound – but this seems to be more of a curious experiment than an essential listen. Finally, the ‘Acoustic Remix’ of ‘Bleed Me An Ocean’ is a remix of a different kind in that Jake LaCore and Joey Connelly have taken the time to strip down the original track to its core elements, removing the distortion and heavier moments to let the song breathe. It isn’t a pure acoustic performance in the spirit of the old MTV’s Unplugged movement since there are synths and other electronic bits bolstering the melody, but without the edge of the original, Gabriel’s vocal gets pushed further into the spotlight, which is enough alone to make this a worthwhile alternative for lovers of the original recording.

These five tracks won’t necessarily replace the 2019 originals in your affections, but a strong case can actually be made for a couple of them – ‘Systematic Chaos (Burn It Down Remix)’ especially – eventually becoming the definitive versions. Perhaps most importantly, ‘Alpha Transcendence’ presents a rare example of a remix project that can actually be enjoyed at face value: listeners won’t necessarily have to be familiar with the parent album to fully connect with it. Although not perfect, there’s so much to enjoy here for fans and new listeners alike.