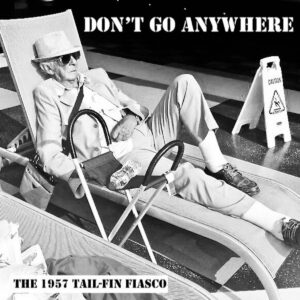 Their sixth release ‘Don’t Go Anywhere’ may have hit Bandcamp less than a year after their 2020 album ‘The Harvard Tango’, but despite some obviously homespun elements, it doesn’t sound rushed in any way. It’s a little less experimental than its immediate predecessor at times, but for fans of the band’s earlier work, that will be seen as very much a good thing.

Instantly gratifying, ’Here All Week’ represents the Fiasco at their retro best when a jaunty rhythm is joined by a world of harmonies, a busy electric piano and a jazzy heart, all off-set by a love of Westcoast pop. Inside of three minutes, this number flaunts most of the band’s retro kitsch without any care for what’s hip. When a verse with hints of old Squeeze numbers collides a chorus that sounds like an old advertising jingle reimagined by 10cc, the musicians sense of glee is almost audible. As much as being great players, they’re a dab hand with a tongue-in-cheek lyric, and this homage to Vegas style light entertainment presents one of their best. Keeping with a theme of US clubs and cocktails, ‘Best Bitters’ is rather more Donald Fagen-esque. This, naturally, casts Dave and Mal in similar musical shoes to those of their earlier years, but their sardonic take on lounge pop loses none of its charm despite feeling over-familiar. Here, set against a smooth samba rhythm, the lead vocals croon while the guitar sounds – seemingly on loan from from an old Andrew Gold LP – help keep everything in check with a steady rhythm. By taking yacht rock to its logical extreme by creating a chorus hook concerning actual drink mixers, this is a little too knowing, but – along with ‘Horses & Courses’ throwing in a massive Latin breakdown – it gives the album a smart and carefree quality that few would deliver quite as effectively.

‘Reno’s Electric Stairs’ provides another highlight by melding the band’s love of 70s kitsch with elements of punchy 60s pop. A barrage of stabbed keys lend a lot of energy, while longer Hammond organ notes reinforce a very retro feel. Better than that, there are moments where the guitars are more forceful than before and they’re used rather effectively to punctuate a verse where Malcolm stretches his voice to give listeners a full burst of his Mike Viola styled twang. A more harmonious chorus is always keen to remind listeners that a more “typical” Tail-Fin always lurk just beneath the surface, while the main hook’s use of various American geographical points gives the overall sound an extra air of authenticity. Overall, it’s a great track for fans and first time listeners alike, and the fact that the band wedge such a busy arrangement into less than two and a half minutes is testament to their knack for economy. Also worth an ear, ‘Silverback’ presents some fine lead guitar playing against various musical ideas that are only a sidestep from early Marc Jordan works (but none the worse for that) while weird circus themed breakdowns accentuate Tail-Fin’s constant need for quirks. It’s the kind of track that would slot nicely into any of their previous records, but thanks to some smart playing it sounds anything but stale.

This isn’t a record that’s all about an easy comfort zone, though, as lead single ‘J Is For Genius’ more than demonstrates by melding a fairly recognisable Tail-Fin chorus to a manic verse that recycles the rhythmic joys of XTC circa 1980. More early 80s new wave quirks cut through ‘Banana Beer and Other Cults’, a track that suggests someone had overdosed on Elvis Costello & The Attractions during the first lockdown of 2020. The way the arrangement fuses a Bruce Thomas-like bassline to a selection of chopping guitars sounds rather like the quirkier bits of ‘Get Happy!!’, while a shift into a waltz for an understated chorus brings everything a little closer to the Tail-Fin world you might expect. With a couple of odd falsetto squeaks and an abrupt ending, it’s the kind of track that seems to be in a race with itself while throwing in everything but the kitchen sink, but it all seems to work. That’s more than can be said for the reggae powered ‘1909 GTC’ which, despite best attempts at taking the Tail-Fin sound somewhere new, is the kind of track that almost sounds half finished. There are glimmers of interesting pop on the chorus thanks to another decent harmony, but it isn’t enough to stop it feeling like a misjudged experiment or a lounge act suffering from a weird Amazulu flashback. Making sure they leave listeners more than aware of their cheekier side, the album’s closer ‘Helligan Begin Again’ sets things firmly back on track when it applies the sass of old Hot Chocolate hits to a core melody that’s very obviously borrowed from Bowie hits ‘Fame’ and ‘Fashion’. As “magpie tendencies” go, this could be the most blatant bit of lifting since Jellyfish took XTC’s ‘Season Cycle’ and called it ‘The Ghost At Number 1’. Nevertheless, it’s enjoyable enoug, and by the time you’ve stopped grinning at its sheer audacity, there’s time to marvel at a great groove where a retro clavichord sound cuts through everything and a wall of organ noises fills plenty of space along the way.

It’s hard to believe most of this came from the Essex suburbs and not via a home studio on a yacht, somewhere just off the California coastline. Its best bits are an easy match for the classic ‘Private Jet Flashback’, while its occasional nods to funk and other genres add an extra welcome twist to Tail-Fin’s already great arsenal of sounds. For a record made purely for the love of making music, this is fantastic. Even though it doesn’t all work, there’s a lot about these independent recordings that show a couple of guys brimming with self-confidence. After three or four listens, you might even find yourself wondering what they could create with Godley & Creme’s recording budget. If you’re a fan of retro pop and still haven’t encountered this band, ‘Don’t Go Anywhere’ certainly deserves a good chunk of your listening time.