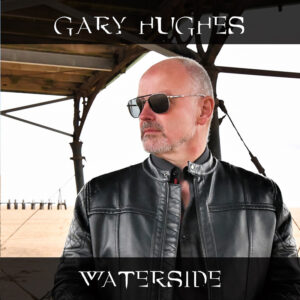 Still, for a lot of people, it’ll be the actual songs that count and, thankfully, this long-overdue return doesn’t skimp in that department. On the rockier side, ‘Save My Soul’ harks back to his 1992 album by way of a chunky riff and almost Coverdale-esque vocal. The way Hughes uses that voice in three different ways to gradually climb from soulful verse, through a vaguely bombastic pre-chorus and – finally – explode in a massive melodic hook really shows off a talented man with still capable of delivering a full range (unlike your actual Coverdale circa 2021). From a pure AOR perspective, the chorus regarding a woman likened to an angel falling from heaven certainly pulls from a clichéd lyrical source, but Hughes’s great voice and general enthusiasm are enough to make it a more than enjoyable listen. If only it hadn’t been given a demo-like final mix and feature a man playing keyboards with a clenched fist it would’ve been a hundred times better. ‘The Runaway Damned’ is home to some fantastic soaring lead guitar work, and a theatrical vocal set against a strident piano during the verse places Gary’s performance squarely between a Ten classic and the more restrained works of Toby Hitchcock, while the chorus takes an unexpected turn by bringing in a melody that sounds like it was inspired by an old Neil Diamond tune or two. Naturally, Hughes sounds at ease throughout, and although there’s something about his voice here that sounds a little more world weary than expected, it sort of enriches the performance with a little extra character. Those who’ve followed Gary’s career over the decades will take a shine to this track from the get go, while newer listeners should still enjoy the kind of track that celebrates some of AOR’s bigger sounds.

Another album highlight ‘Electra-Glide’ kicks off with some really 70s sounding electric piano and chorus driven guitar sound that hints at late 70s Queen, but quickly retreats into a comfort zone where the verse takes on more of a Survivor/Scotti Brothers mood. This obviously suits Hughes brilliantly. Rising into the chorus, there are bigger harmonies playing out, and these go some way to helping an initially wobbly arrangement find its feet as Hughes reaches inside himself for some fine, longer notes. Bolstered by decent harmonies, this could be a match of his rockers from two and half decades ago, such is his timeless approach to song writing. Also on the plus side, this track represents one of the times that bassist David Rossingana is at his most audible and his fluid; his jazzy lead work underscoring Dann’s guitar is absolutely stunning. There’s so much within these four minutes to like, but it’s outshone by the title track which feels far more natural, almost sounding like an old Little Angels leftover with its stomping edge and melodic nods to tracks like ‘Boneyard’ during the verse. More of Hughes’s usual style is unleashed on the album’s best chorus when a massive 80s pop melody joins the rocky edges to invite massive sing-along potential. With a huge, dirty sounding lead guitar break waiting to be discovered somewhere along the way, this is something of an instant classic – worth the price of admission alone.

Elsewhere, there is more reasonable material on offer, but most of it sort of feels like Gary Hughes on autopilot (especially in the case of set opener ‘All At Once It Feels Like I Believe’ which sounds like a direct throwback to his ‘Precious Ones’ LP from 1997, albeit with half the budget, leaving it with half the charm) but this, in the main, will still be enough for most fans to welcome the release of ‘Waterside’. In the case of the other big ballads ‘Screaming In The Halflight’ (where Gary can be heard in full flow, underscored by unexpected female harmonies) and ‘When Love Is Done’, Gary’s most undemanding and forgiving fans might even find a couple of new favourites. For those aiming a little higher, though, ‘When Love…’ should’ve been fat better than it is. While the performance shows that Hughes has lost none of his abilities with an easy melody over the passing decades, it gets hampered by the worst final arrangement of the whole album. Treece-Birch wields a particularly nasty Casiotone sound throughout – occasionally sounding like a man tinkling incidental music for a cheap TV show from 1986 – and his huge chords just sound like a quick musical sketch due to be filled by strings at a later date. The drums are the worst sounding on the whole album, leaving poor Gary to do his best over the top of something that sounds for all the world like a karaoke disc. Luckily, as before, he’s in great vocal shape, approaching a world of long and overwrought notes in an easy, almost honeyed style, calling back to a few of his career highlights. He certainly deserved so much more from a musical standpoint.

Overall, ‘Waterside’ is all to often a case of “decent songs, poor send off”. None of the fault ever lies with Hughes himself; his songwriting is as strong as ever – even if a little predictable in places – and his voice has held up brilliantly over the decades. The flawed nature of the release is purely down to an absolute travesty of budgetary constraints. Sad but true, but from an audiophile’s perspective, this is the kind of record that painfully shows why this kind of melodic rock isn’t ever going to have a massive resurgence and why so many of Frontiers Records’ releases are only celebrated by the diehards and forever faithful. For the more discerning fan, this potentially brilliant return will actually be a rather frustrating affair. For those interested purely in the songs, it’ll play far better, of course, but there’s no getting past the fact it’s only half the record it really could have been.