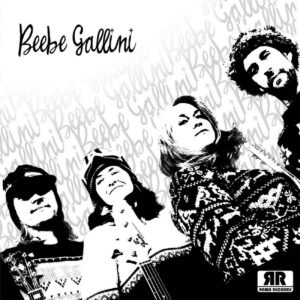 Despite being a new band at the time of this release, Beebe Gallini features a few familiar faces from the garage rock scene. Miss Georgia Peach (vox/rhythm guitar) and Travis Ramin (lead guitar/drums) of the Minneapolis band The Short Fuses have joined forces with Strumpet bassist Amy Larson Pearson, but in many ways, this side project is far more than an extension of their previous work. In fact, although first impressions may suggest something more ragged, Beebe Gallini are still broad in appeal. Their five track digital affair ‘East Side Story’ is a fun but ragged affair. Despite any potential roughness, it’s a great showcase for the band in that it shows a massive respect for the past with a couple of top notch covers, and also an optimism for its future with a couple of self-penned rockers that cling onto a similar style. By combining new material and old classics, they truly aim to pull in listeners from far and wide.

Those who enjoy the slightly punkier end of the garage rock spectrum will certainly take an immediate shine to ‘Nobody Loves The Hulk’, a banging tune that’s heavy on distortion and snare drums. It’s hard and fast style presents the more raucous side of the band and a repetitive hook makes them seem deceptively simplistic. However, within this garage punk nugget, there’s also some great guitar work from Ramin and a fat and fuzzy bass from Amy more than suggests some huge musical muscle. The reliance on distortion takes so much focus away from Peach, though, and if there’s anything here that’s attracted Short Fuses’ fans, it’s her huge voice. By drowning that in effects, she becomes much less important, but this tune – falling somewhere between The Detroit Cobras and Rum Bar favourites Cheap Gunslingers – has so much gusto that it works irrespective of the musicians involved. First time listeners will find something that sounds great when heard at high volume…and those who came purely for the voice will get plenty of consolation elsewhere.

‘The River Flows’ takes on a far more moody mantle as heavy beats collide with a hefty bottom end, instantly highlighting the fact that it was penned by the bass player. After a couple of bars, however, it’s clear that this raw, almost bluesy track is also very well balanced. A massive retro twang provides a brilliant musical element – often suggesting guitarist Ramin had been listening to Link Wray – while still allowing Peach plenty of space to curl her slightly gravelly voice. The repetition of the title creates a simple and effective lyrical hook, but you won’t find anything typically sing-along here; this is purely about attitude. Between the shamelessly retro music and a one-take approach to recording (something highlighted by an especially carefree backing vocal), this rather sinister workout shows an incredibly different side to the band. Rather more perky, ‘Open Up Your Door’ throws the spotlight squarely on Peach, who spends three minutes going head to head against a fuzz guitar. In terms of verse, this is a straight up garage rocker – so timeless, you couldn’t really tell if it were genuinely new or an old CBGBs rarity – where Peach’s vibrato-fuelled cry has so much oomph, it sounds like Marianne Faithful channelling Patti Smith. That already brings much to enjoy before the chorus truly ups the ante by allowing Pearson Larson to add some fantastic harmonies. Something of a great underground track awaiting your party playlist, it makes perfect sense that these guys would find themselves on the same label as The Shang Hi-Los and Watts.

A solid run through of Bob Seger’s ‘East Side Story’ really accentuates Beebe’s raw, garage sounds and the way the vocal swamps the music makes it a brilliant showcase for Peach. With the usual ragged glories augmented by a 60s sounding organ, this is another recording that could easily have been found on an old tape reel somewhere in a dim and distant 1970s past. Although it mightn’t be as strong as the Alice Cooper recording from 2019, there’s plenty here that’s respectful to Seger’s legacy. If there’s any reason at all to check out this EP, though, it’s for the band’s fiery rendition of ‘Hipsville 29 BC’ (a 1966 vintage from Sparkles); in terms of borrowed material, really brings out the very best in Beebe’s talents. The rhythm section locks down an amazing garage rock groove, while the song itself winds up a brilliantly trashy riff at speed, blending old garage rock tropes with a touch of rockabilly sass. Predictably Miss Peach finds a vocal comfort zone and throughout these two minutes she’s able to deliver a really natural performance that bristles with energy, often throwing a spotlight on the slight vibrato in her voice. This is the kind of tune that would sound cool in the hands of most retro musicians, but Beebe Gallini really run with it. It really is a perfect snapshot of these recording sessions.

Although these recordings can seem rough and ready – something very much reinforced by a no-frills recording style and budget – there’s more than enough here to keep old fans of The Short Fuses interested. The very natural approach might not win over new listeners instantly, but a few plays of ‘Hipsville 29’ should set that straight. Although not perfect, this is very much the kind of release that’s made with love and shows a band who absolutely treasure every moment jamming together. That kind of enthusiasm can be infectious, and just sometimes, that’s more important than all round sheen.