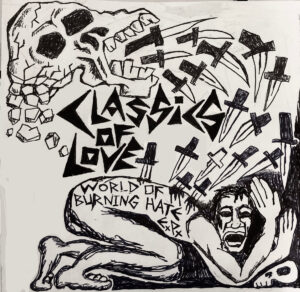 Well, almost nothing. It was unlikely anyone would’ve bet on new music from Jesse Michaels and yet at the end of July, he released a new EP with his band Classics of Love, a band last heard from in 2012. A follow up to ska punks Common Rider, Classics of Love drew a greater influence from Jesse’s previous band – the seminal Operation Ivy – and promised great things, only to split after recording their first full length album.

The Classics of Love of 2020 may be Michaels fronting an entirely new line-up and take far more of a hardcore stance, but thanks to an unmistakable vocal style their sound is still very much recognisable. It might also only present approximately ten minutes’ worth of new music, but any new music at all from this punk legend is very welcome. From the moment ‘Future Shock’ kicks off and Michaels begins to roar, it’s easy to imagine being thrown back into the world of Operation Ivy’s more aggressive material like ‘Hoboken’, but with a muddy bass sound adding to the hardcore vibes and an atonal, angular guitar solo taking centre stage, you’ll find just as much influence from bands like Jerry’s Kids and Agnostic Front, albeit reworked in a more lo-fi fashion. The same mood cuts through ‘Crime Pays’, but places more of a focus on the drums (played with a sharp, almost machine gun precision by John Fontes of Los Nauticals) while guitarist Sharif Dumani occasionally breaks through the noise with his best approximation of classic Greg Ginn inspired lead work. With Michaels sounding exactly the same as he did in 1989, this is a genuine highlight.

Going even deeper into hardcore, ‘Life Dread’ brings another instant classic which opens with a fuzzy riff throwing out an ascending scale – again, showing an influence from ‘Damaged’ era Black Flag – before the whole band launches into a speed driven, angry force of nature that’s made even more intense thanks to the legendary Mass Giorgini’s deliberately lo-fi production. Things get even fiercer once Jesse steps up to the mic, and although the edges of his voice still display the Operation Ivy sound of his youth, a more intensive growl pushes his performance further into a throat-rawing growl. His anger at “people you cannot stand fucking up your life” is a universal concept that’ll be understood by punks of all ages, while the band goes all out on a classic hardcore riff. While ‘Walking With The Lost’ may seem more like generic hardcore at first (there’s very much a Minor Threat influence at play from the off) it’s nice to hear the band eventually stretching their talents as the number progresses, dabbling with a few heavier drums and a mid-tempo riff, before attacking a classic punk sound that draws more of an influence from the original UK scene. In closing, there’s a little more experimentation when ‘Dawn of Universal Law’ opens with tribal drums and an overdriven guitar sound which shifts seamlessly into a heavy, mid-tempo workout where Fontes opts for more of a grinding sound. This, obviously, sounds like a great backdrop once Michaels starts to vent. With such a great and intense riff being worked so hard, it’s almost a disappointment when this number comes to such an abrupt end at a little over two minutes.

Despite being recorded at a time when lots of specific socio-political things could’ve provided an influence, according to Michaels, “none of these songs are topical” more a reaction to the fact that “the world is garbage”. This might seem like a cop-out initially, but it’s actually a smart move. By eliminating elements that could be easily time-stamped within a specific time in history, Classics of Love return with a slab of hardcore that’s pretty much timeless.