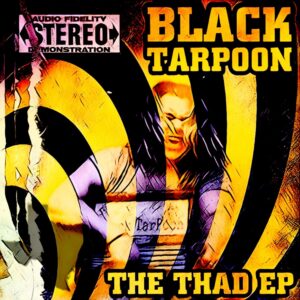 The lead track ‘Sarita’ kicks off with a riff that falls somewhere between ragged country and rockabilly, it’s strident acoustic work providing a solid backbone throughout. That’s lucky, since the rhythm section don’t maintain the biggest presence. Perhaps due to the DIY nature of the recording, the drums are little more than a country two-step rattle and half the bass is lost beneath the vocal. Very much working in TarPoon’s favour, those vocals are career bests for both frontman Jesse James and bassist Oatmeal Reed whose voices occupy opposite ends of the spectrum, yet seem to compliment each other brilliantly. James’s lead is friendly; very much of a rock-pop persuasion. Throughout this number, his clear delivery underpinned with a slight twang somehow makes Black TarPoon sound like country rock’s answer to Matchbox Twenty. In contrast, Oatmeal’s bass heavy drawl constantly pulls back to the band’s spit and sawdust Texan roots. With a great tune in place, it needs an equally good hook, and the repeated refrain of “I lost my faith…I lost my faith in you” takes all of three plays to stick. Although this sounds as if it should be an acoustic reworking of a number that once had a much more intensive and full on punchiness, it stands fairly proudly in its rootsy and acoustic guise. If this supplies most people’s first experience of this band, it’s not a bad one to have. Not bad at all.

Issued as a video single ahead of release, ‘Gloom’ offers more in a similar vein, but when slowing down to what’s essentially a country rock two-step, Black TarPoon almost sound like a band struggling against a more rigid rhythm. However, what this performance lacks both rhythmically and vocally (Oatmeal’s croak can be hard going here), it makes up for lyrically with a straight talking commentary on depression. Also, with the addition of some fantastic country-blues lead guitar work, it eventually picks up some of that musical slack along the way. In fact, despite colouring one of Black TarPoon’s weaker songs, Billy Mo’s lead work throughout this track is certainly one of this short release’s standout features.

A re-recording of ‘Sleeps With The Fishes’ rounds out the EP with something that’s more “traditionally” Black TarPoon. The arrangement is essentially the same as its 2014 counterpart, but with added drums, the song now has the kind of drive it always deserved. There was always something at the heart of the melody that sounded a little like 3 Doors Down’s mega-hit ‘Superman’, and the fuller arrangement seems to amplify that. This isn’t just obvious in parts of its jagged chord progression, but also within a couple of its vocal melodies. The clean vocals very much tap into that 90s vibe best associated with pop rockers like Matchbox Twenty (on at least two of these songs, James is a dead ringer for Rob Thomas, albeit in a slightly wobbly mood) and between that voice and some strident acoustic work, the track has a solid backbone. Contrasting that, Oatmeal grumbles and growls with a counter vocal that sounds as if fellow Texan Mark Hennessy (ex-Paw) has stepped in on the session. It’s the push and pull between clean, commercial sounds and a homespun grittiness that keeps this interesting. With everything compounded by a musical brevity and a pointed lyric centring around an expletive driven hook, listeners are given a particularly direct example of Black TarPoon’s craft.

Although quite commercial in places, Black Tarpoon’s twist on an American roots sound on this three tracker results in a couple of rather gratifying performances. This recording is a little slicker than some of their previous work – there certainly seems to have been a slight sidestep from their self-confessed “hillbilly” works on 2017’s ‘A Macing Graze’ – but, overall, there’s still enough for extant fans to enjoy.