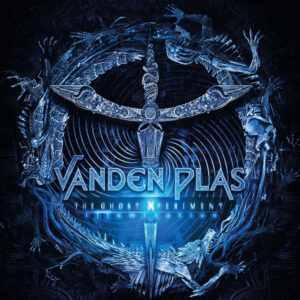 When it comes to prog metal, Dream Theater always seem to take the bulk of the praise. It could say something about how unadventurous a core of prog/metal fans appear to be, especially since – perhaps with the exception of 2009’s ‘Black Clouds & Silver Linings’ – James Labrie and co. haven’t recorded a truly decent album since 1994’s ‘Awake’. There are other, much better practitioners of proggy metal fare out there. Symphony X are in possession of a far better vocalist than Labrie will ever be and the UK’s own Threshold are genuine masters when it comes to an actual tune.

One of prog metal’s most well-rounded acts, Germany’s Vanden Plas have it all. Their core sound revolves around fairly traditional Dream Theater/Fate’s Warning-ish fare, but as a band, they have never been afraid of experimenting with a Euro power metal stance and certainly haven’t been shy of an AOR inflected hook from time to time. Within their extensive back catalogue, you’ll find riffs and complexities aplenty; even a concept album or two. More importantly, you’ll discover a band with keen ear for a good melody. Somehow, though, the European band doesn’t get talked about anywhere near as much as you’d think.

2019 saw the release of the band’s ninth studio recording ‘The Ghost Xperiment – Awakening’, the first part of a two album concept piece revolving around a haunting narrative. From a musical perspective, it had all the strengths you’d expect from a Vanden Plas disc, but unlike some conceptual releases, the half dozen songs could be enjoyed without the listener having to work too hard or getting bogged down within a story arc.

2020’s ‘The Ghost Xperiment – Illumination’ concludes the story with a massive musical confidence.‘When The World Is Falling Down’ opens this second chapter with an ominous keyboard drone before the band launches into some classic sounding prog metal that could easily have been recorded in 1995. More than ever, vocalist Andy Kuntz sounds frighteningly like James Labrie (on one of the Dream Theater warbler’s rare tuneful days), and that’d be enough for the more casual listener to find familiarity within the Vanden Plas sound, but the music quickly asserts itself as the most important thing. Guitarist Stephan Lill takes on a commanding presence throwing out busy, jagged riffs, before moving through a fantastic downtuned groove where the guitars and keys interlock. In terms of riffs and even overall sound, everything here is first rate, but – as before – Vanden Plas understand that it takes more than sheer musicality to make their compositions stand, and Kuntz delivers an absolutely killer chorus hook where the lyric “Wake me, zombie!” comes loaded with a full scale melodic rock charm. The basic melodic structure of the chorus will more than please listeners who are set on enjoying this album purely at face value, while the references to the undead (“they look just like us, unexpectedly”) re-acquaint others with the story and the ghostly presence facing Gideon Grace. Moving towards the number’s inevitable climax, Stephan drops in with a faultless shredding lead guitar sound. As if realising that solo would be too short, he returns for a second lead break on the other side of a final chorus where his busy style is tempered by some great sweeps. In closing, Gunter Werno steps forth for a shamelessly widdly keyboard break, and everything combined makes for a staggeringly good opener – something that outshines everything on ‘The Ghost Xperiment – Awakening’.

‘Under The Horizon’ quietens the mood with some soft piano straddling AOR and musical theater, but luckily at the point where it comes dangerously close to “Dream Theater plays Disney” a jagged guitar riff pierces through and takes the track into the realms of brilliant chugging prog metal, never a million miles away from Symphony X. As before, Lill carries the bulk of the weight throughout, but they way Werno steers the melody during a big, melodic rock chorus is more impressive. His style often hints at musical interests that are closer to twenty first century Swedish AOR than the tried and tested prog metal tropes. With the inclusion of a fine vocal melody and an equally big guitar solo driven by sweeping notes, these six minutes work perfectly both within the context of the album and as a standalone work. Showcasing far more of an intricate semi-acoustic side in places, ‘Black Waltz Death’ provides another album highlight when Vanden Plas inject some Mike Oldfield-esque prog folk into a massive ballad. Atop the lilting melody, Kuntz takes every opportunity to stretch his voice and even though its been subjected to various filters, his naturally big style shines through. Adding more of a metallic crunch and synthesised strings, the track gradually builds throughout and by the time a dense chug meets with a choir of vocals, you might even wonder if this album – and musical tale – has peaked early.

Changing the mood yet again, ‘The Lonely Psychogon’ casts Vanden Plas in full metal mode during an intro that sounds more like Symphony X, before dropping into a jagged prog metal groove that sees Kuntz’s vocal and Lill’s guitar doing battle, before a wonky chorus hook mixes squirly keyboard lines with a quasi-theatrical melody. Perhaps more than anything else here, there’s an underlying feeling that we’re waist deep in a concept piece, since a few of the musical flourishes come at the expense of instant gratification; luckily, though, by the second time you hear that chorus, it all feels more natural. With the second half of the track being introduced by a massive downtuned chug, a few stabbed keys and a floaty guitar solo that occasionally has more in common with the neo-prog of Jadis than typical Vanden Plas, there’s more than enough variation to make this feel as if the album is actually progressing, too. When it would have been easier to rehash bits from ‘…Awakening’ with some new choruses, you have to applaud the band for putting in maximum effort.

In some ways, ‘Fatal Arcadia’ comes close to filler, in that most of its musical hooks do resemble things that have already surfaced throughout ‘The Ghost Xperiment’ and other semi-recent Vanden Plas works, but even then, it still provides a full eight minutes’ worth of impeccably played prog metal. A stronger bias towards long instrumental passages where Lill’s heavy, staccato riffing and Werno’s complex fills provide a lot of entertainment, and for those hoping for a little more than that, a brief section where the demons are represented by melodic death metal growls surely provides one of the most intensive moments of the Vanden Plas catalogue to date.

In prog fan terms – ie: the misconception that “longer = better” – ‘The Ouroboros’ is the album’s “main event”. Unfolding very slowly across almost a quarter of an hour, it pretty much covers most of the band’s musical ground to date. Taking the listener from floating piano motifs and theatrical vocals into a world where this quiet grandiosity is complimented by more soaring neo-prog guitar work, the first movement actually moves very naturally as opposed to relying on a cut and paste approach. When taking on heavier influences, there continues to be a firm guiding hand towards the more melodic end of the prog metal spectrum at first, with huge chords underscoring Kuntz’s passionate delivery, before a layer of squelchy synth noises fleshes out an already huge sound. At the six minute mark, there starts to be a feeling that this track might have been more effective if it’d started to pull everything together. However, the band has big plans, and instead, it changes tack entirely to introduce some punchy metal, where the riffs shift from the grandiose and into something that invites sharp head-bobbing. Although the riff is superb and Lill’s delivery of said riff is probably even better, it perhaps should have been used to kickstart a new track rather than being wedged here, as it’s in danger of being missed by listeners who’ve not taken to the almost musical-like approach of the number’s first half and possibly tuned out. Augmented by a terrific solo, this heavy interlude provides a superb three minute distraction before everything slunks back into the safety of the original melody. There’s a lot of good music to be found here, and those who crave massive epics will certainly find plenty to love throughout, but in terms of delivering that Vanden Plas hit most effectively, it doesn’t match either ‘Black Waltz Death’ or ‘Under The Horizon’.

Drawing everything to a close, ‘Ghost Engineers’ works a soft piano melody against sounds of a mournful (synthesised) cello, while Kuntz takes a final opportunity to explore the lighter end of his voice. In terms of tune, it’s far more of a slow-burner, but the way the keys instantly grab a hold of a near-timeless melody more than sets up a solid arrangement. Although it’s far more reliant on mood than obvious hook and sounds more like an intro than a coda in some ways, it gives listeners a welcome opportunity to wind down.

Having kept fans in suspense over this recording’s conclusion, ‘The Ghost Xperiment – Illumination’ truly doesn’t disappoint. It isn’t full of massive musical surprises; it fills the better part of an hour with the band hitting upon the kind of prog metal vein they’ve been tapping since 2010’s ‘Seraphic Clockwork’ – slightly heavier than their 90s work, but always big on riffs and melodies – but what it does, it does brilliantly. The fact that Vanden Plas can still pull something so impressive out of the bag some twenty five years on from their debut is genuinely inspiring. After this, rather than being the prog metal band who’ve supported everyone, they should be considered one of the scene’s true leading acts.

[A bonus track, separate from the ghost concept, ‘Krieg Kennt Keine Sieger sounds a lot like the best material from a couple of slightly earlier Vanden Plas discs. Between huge, heavy riffs augmented by horsey squeals and a few power metal tinges, fans will more than find this a welcome addition, whether or not the German lyric is understood. A few Eastern melodies that hint at Rainbow’s ‘Stargazer’ add extra layers and everything sounds great with the volume cranked.]