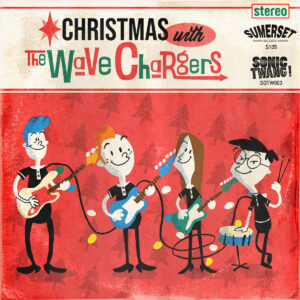 The follow up to that glorious recording is somewhat of a left turn, with The Wave Chargers applying their unashamedly summer based sounds to a couple of traditional Christmas tunes. The strongest offering, ‘Surfin’ Jingle Bells’, actually makes one of the most tedious festive sing-alongs sound interesting by applying a ton of reverb from buzzing valve amps – for that full on late 50s authenticity – before launching into a rhythmic and jaunty riff, over which the familiar melody is applied. Despite the surfin’ attitude, it’s still easily recognisable as ‘Jingle Bells’ – for better or worse – and as Viel’s brittle twang steps up to the plate, he applies the same loveable tone applied to his own work. Sure, it’s not as huge and frivolous as a similar offering from The Brian Setzer Orchestra, but it doesn’t intend to be: as a quick and natural sounding throwback to the 50s and pre-Beatle 60s, it works well enough. On the flip, the brief ‘Surfin’ Tannenbaum’ is actually far more effective, applying a huge amount of speed and echo to the traditional melody, dishing out something that’s a cross between an old Dick Dale banger and a Shadows novelty.

Even with the festive angle, it’s still really easy to spot how and why The Wave Chargers are one of the very best bands in their field. These recordings sound so authentic, it’s quite disarming. If you’re on the lookout for something alternative to the tried and tested xmas playlists, this short digital release will be worth a download. …And if you’ve still not heard the self-titled full length, you need to rectify that as soon as possible. There’s no need to wait for summer…