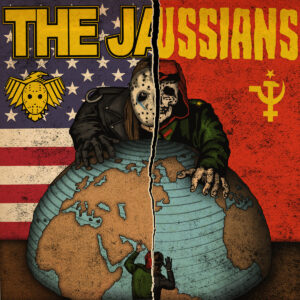 First up, everyone’s favourite horror punks The Jasons stick to their tried and tested formula of recycling old Ramones influences with a slightly bigger punch. That means that there’s not too much here that you won’t find elsewhere in their now extensive back-cat, musically speaking. Of course, for the fans, that’ll not be too much of a problem. Lyrically, it’s a different matter. They’ve obviously grown up a bit since their blatantly offensive early days, and although these songs aren’t ever going to win an Ivor Novello award any time soon, there’s a certain gleeful charm that comes from hearing The Jasons openly goading the Black Russians themselves. After all, if this is to be a musical battle, how better to handle it than with a verbal face off?

‘Kill A Commie For Mommy’ makes an early play with lyrics like “the eagle has landed tonight” and “the Russians fade to black”, signifying a power stance, but the fact that the basic idea could inspired by The Black Russians’ own ‘Mommie Is A Commie’ adds insult to injury. Across two minutes, the punky guitar riffs come thick and fast, but the biggest musical interest comes from a ragged bassline that’s presented high in the mix, often suggesting The Jasons could get even more aggressive. Never the most subtle band, The Jasons top their anti-Russian message with an out of tune solo based around ‘The Star Spangled Banner’ for good measure. In a slightly more melodic mood, ‘Red Dawnna’ (inspired by Black Russians’ ‘Red Dawn’) sounds like the best Screeching Weasel tunes circa 1994, complete with a shrill John ‘Jughead’ Pierson lead guitar sound. It’s The Jasons’ best recording this time out, full of great riffs, but the musical aspects are quickly outshone by a timeless pop punk chorus that’s absolutely loaded with gang vocals. They know it’s great, too: after using that chorus to lend the number a great strength throughout, The Jasons use it to fill the bulk of the coda, where its repetitious approach truly smashes the singalong hook into listeners’ skulls. This is a tune that’s guaranteed to stick. For their third contribution, The Jasons take Black Russians’ ‘A Blaze In The Soviet Sky’ and recycle it with a huge amount of respect. Being a taut punker that, again, resembles an old Screeching Weasel banger, it’s the kind of tune that didn’t need any improvements, so in many ways, The Jasons’ straight ahead approach seems sensible. Their recording benefits from a bigger production job that brings out the warmth in a brilliant bass part throughout, and in keeping with The Jasons’ previous work, there’s a much bigger focus on shouty backing vocals, so even without any kind of reinvention, it stands up as a great cover in its own right.

The Jasons may have been this split’s veteran band, but Black Russians outdo them at almost every turn. Their work is a little more ragged, but with that roughness comes a great energy. Between some brilliant hard-edged Ramonescore riffs and the kind of scratchy vocal that screams attitude, the band deliver three tracks that punk fans should not miss. ‘Kill The Jasons’ returns the lyrical salvo that the horror punks set up with ‘Kill A Commie…’, but has the benefit of a brilliantly simple chorus where the title acts as a chant filled with intent. Musically, the arrangement falls somewhere between Screeching Weasel and Fifteen, and as such brings out the best in some hard and fast guitar chops. Better still, ‘Invasion USA’ throws out lightning fast chords against a gravelly vocal that makes Black Russians sound like an old Lookout! Records band with much bigger boots. The tried and tested arrangement is one that’s guaranteed to please fans of the style, but with the Russians extra energy, it manages to sound surprisingly inspired. …And if by a minute in, you don’t think it has the makings of a classic, a final section featuring a call and response vocal and a whole world of shameless “na na na”s should more than prove otherwise. A couple of plays is enough to single this out as being the kind of punk that never gets old. At the point you think Black Russians must’ve peaked, they pull a version of The Jasons’ own ‘Red Blooded American Punk Rock’ out of the bag, which, naturally, they’ve morphed into ‘…Soviet Punk Rock’. Regardless of any lyrical changes, it’s a brilliant slab of punk that shows The Russians are also able to step aside from straight Ramonescore and sound equally cool playing other subgenres of punk. Here, they’re dab hands at a hardcore punk ‘n’ roll sound that taps into some of the Supersuckers recordings but beefs them up considerably. In terms of musicianship, its the EP’s best cut: the guitars display such a great tone and there’s time enough for a couple of sleazy lead guitar breaks that’re much closer to 80s glam metal than any punk, while the cocky vocal suggests a band ready to take the punk world by storm. Or sheer force – whichever is easist!

‘Saving Tomorrow…’ is very much the kind of release that’s big on riffs and even bigger on fun. Although it takes a few plays for a couple of The Jasons’ tracks to work their magic, each one should provide extant fans with some decent collection fillers. The tracks from Black Russians, meanwhile, are strong enough to give some listeners a new favourite band. At the very least, their performances here should inspire many listeners to go back and check out their ‘Death By Communism’ LP from 2019. Combined, these bands and tracks offer a fantastic punky experience. While none of the material adds anything unexpected from either act, this EP is a highly recommended listen.