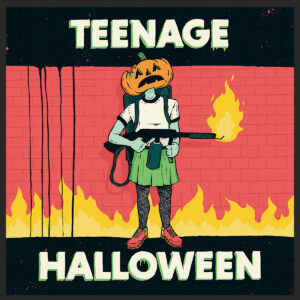 An instant highlight, ‘Figwit’ kicks off with a barrage of multi-layered guitars chiming proudly. It’s almost as if they’re about to launch into an old Springsteen track (…you can take the band out of Asbury Park…) before everything descends into a very familiar riff where the core borrows heavily from 90s alternative influences. Ultimately, the song becomes rather more like a deep cut from American HiFi than an old favourite from Springsteen or Asbury Jukes, but the entertainment value remains very high. Atop a crashy guitar riff, frontman Luke Hendricks roars and rasps in a way that sounds like a cross between Joey Cape and Tom De Longe, and although his reedy style might not be to everyone’s tastes, his performance and message comes with enough gusto to make it work. “I am starving for a world without ridicule”, he sings, before adding that he “dreams of a safer life” and how he’s too often had to deal with “stares from bigots at the side of the road”. Thoughtful stuff, indeed, and once you’ve adjusted to his ragged style, it actually sounds pretty cool. It gains extra strength when placed against a counter vocal from bassist Tricia Marshall, however, adding an all important sugary overtone that takes this pop-punk number further into the realms of noisy power pop. With a massive hook, a crashy, driving riff and an a vital message, this brings out all of Teenage Halloween’s best traits in a little under three minutes.

In a similar vein, the short and sweet ‘Drown’ takes the core of an early Springsteen melody and cranks it up substantially. The howling guitar that’s relied upon for a musical hook is shamelessly old fashioned, but the rest of the number is more than happy to parade various traits that would have made these guys heroes of the 90s college rock scene. A jubilant chorus battles that riff for all-round memorable status, and occasionally sounding like Tripping Daisy’s Tim De Laughter in a bad mood, Hendricks really runs with a great vocal melody despite his own voice having obvious limitations. Rounding out the trilogy of poppier tunes on this LP, ‘Turns Right, Goes Straight’ packs a huge amount into just over two minutes. A rockabilly derived rhythm creates a great base for Eli Frank’s ringing guitars, a groove-oriented bassline fills plenty of space and the lead vocal is particularly well suited to everything. There are moments where the tune becomes disjointed and Hendricks is left to carry the bulk of the melody, but this still works. In some ways, the number’s kitchen sink approach places Teenage Halloween above your average pop punkers. In closing, they dispense with the hooks and melodies altogether and bow out with a few bars of straight punk thrashiness, but a real energy combined with an obvious retro charm creates something great.

Taking their melodic side and applying it to some unfussy 90s alternative grooves, ‘Sweat’ sounds a lot like a long forgotten deep cut from Everclear – a heavy reliance on a mid-tempo verse driven by muted chords could easily be the work of Art Alexakis, as could the trebly jangle introduced in the final moments – but it’s the main riff that wins out. The dual guitars supply strident melody that wouldn’t feel too out of place on Smashing Pumpkins’ ‘Monuments To An Elegy’. Although this number is comprised of at least two or three obvious influences, the way Teenage Halloween bring those together, before adding some really eloquent thoughts regarding mental health struggles, results in a superb listen that’s far deeper than any perceived throwaway alt-rock. More of the Everclear edge provides the heart of ‘Clarity’, a tune that’s big on mechanical rhythms, but much less memorable. Musically speaking, it’s the closest the album gets to offering filler material, but even then, there’s a great overdriven guitar riff midway if you manage to stick it out long enough. What it lacks musically it more than makes up for lyrically, with the song’s protagonist reflecting on “horrible people giving horrible advice” when growing up; musings on friends no longer around and the feelings that come with making the right or wrong choices when he “can’t control which way the bottle spins.” Taking a similar musical route but giving listeners something more instantly satisfying, ‘Summer Money’ takes a few old riffs from Everclear, Skiploader and a couple of underground janglers, again showing how much this band has absorbed from the 90s. As before, the mix of indie and punk serves them well; with a punchier drum sound taking the weight on the chorus, the vocal displays a genuine ease, while a multi-layered guitar fleshes out a verse that hints at a love of alternative pop like The Pains of Being Pure At Heart. Given that the number is so well constructed, it comes as a surprise when it just stops dead at two minutes. It sounds as if there should be another verse – or at least another flash of that chorus hook – but the band obviously feel that would be labouring a point.

Turning even more to their punkier side, ‘Holes’ rattles along at great speed via a jagged riff while Peter Gargano smashes his drum kit. In many ways, this sounds like something straight from the Lagwagon back catalogue, but if punkier things aren’t for you, stick around for the chorus where a melody with a dual male/female harmony adds more of a sugary slant. It very much suggests more of a power pop influence, but in pop punk terms, its still great – a number that’s got a genuine focus on musical tightness. Factor in a frank and open lyric about sexuality struggles and it becomes a postential album highlight. ‘SMH City’ flaunts a massively melodic power pop intro – almost grandiose for Teenage Halloween – which turns out to be a red herring. After a couple of bars of something that sounds like a distant cousin of the Lemonheads’ ‘My Drug Buddy’, the tune explodes into a brilliant punk number where thrash chords are underscored by busy, high toned guitars that really bring out the best in the band’s speed driven side. Elsewhere, ‘Stationary’ drops into a 90s groove incredibly quickly, but in many ways presents a much fuller sound than other songs by really captialising on a loud dual guitar sound and deep rattling bass. Although everything is well played, this tune really excels during the coda where a shrill guitar lends a genuine sense of urgency. For lovers of retro alternative rock, it could become an album standout somewhere after the third play.

The album may be incredibly short, but there’s time enough for a bit more variety and taking time out for something quieter, another highlight is supplied by ‘Racehorse’, a tune where Teenage Halloween think a little further outside of the box. The clean strums that open this number draw a little more influence from bands like Toad The Wet Sprocket, and indeed, beneath the bombastic drums of the track’s verses, there’s something that’s surprisingly rootsy. The quieter approach sets up a great bed for one of the record’s most pointed and emotive lyrics – this time concerning running away to avoid homophobic confrontation from the police force. Sad, poignant and so achingly honest, it’s easily the best thing in the band’s canon to date. …And if lyrics aren’t your thing, the arrival of a loud riff at the mid-point, reintroducing something more “typical” will be enough to win you over. Again, the influences are squarely from the 90s, but it’s a pleasure to hear Teenage Halloween turning their talents to something much less punky.

If you’ve ever had a love for 90s pop punk, classic Everclear, bits of American HiFj and other 90s college rock, this is certainly going to be an album you’ll want to check out. If you’re interested in important social issues, you’ll also want to make time for this. Teenage Halloween are using their musical platform in a way that truly speaks to the listener; this LP offers material that genuinely lays the issues out there in the open for all to consider. It’s sharp and unflinchingly emotional but, above all, it’s a great record. Don’t miss it.